“The Love of God”


As we enter the second week of this Lenten season, Jesus begins to teach the disciples openly about his impending death and resurrection. Talk of his own death is not something the disciples are prepared to hear. While Jesus reassures them that after three days he rise again, talk of a resurrection makes no sense to them.

I imagine in some ways that that was even more frightening than what Jesus had to say about what lay ahead for him. The thought they too must suffer and die is not something they anticipated nor is it a thought that most of us here this morning would enthusiastically embrace for ourselves.

But if we are to be faithful in our proclamation that the kingdom of God is near than we too will find ourselves facing those are opposed to the hallmarks of that kingdom where peace, justice and love abides. It may be that we too will face our own deaths as a consequence of our faith.

Just this past week there was a report that religious intolerance in the world is on the rise. The other week 21 Coptic Christians were killed in Libya. The week after, members of a Christian minority were killed in Syria.

Lest any of us find comfort in asserting that Christians are dying for their faith, during that same period Shiites and Sunnis were killing each other in Afghanistan, both of whom are Muslim. Hindus and Buddhists have also experienced their share of persecution as have many, many others around the world. 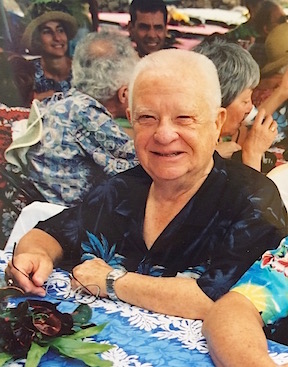 For those of us for whom Maui is home, it is likely that we will face our own deaths surrounded by family and friends. It was not long after Wayne died in early January that I stopped by to see Marilyn.

Wayne and Marilyn had been married for over fifty years. As Marilyn’s health began to decline a few years ago, a decision was made for her to move into Hale Makua, a nursing home for the elderly, in Wailuku where she would receive the constant care and attention that she needed.

During that time Wayne made the drive from Kīhei to Wailuku and visited her every day until his own health began to decline. After being hospitalized following a fall, Wayne also moved into Hale Makua and had a room of his own a short walk from Marilyn’s room.

On the morning of my visit with Marilyn, I was told by one of the nursing staff that she was in the dining room. I made my way over and found her sitting in the middle of the room.

“Good morning, Marilyn. It’s Kahu. Do you know who I am?” I asked aware that over the last several years, her memory had begun to fail.

I noticed a bit of a twinkle in her eye as if to say, “You just told me you were Kahu.”

“Alright,” she replied sounding uncertain about why I had stopped by for a visit. “How are you doing?” I asked.

“Do you remember Wayne?” I continued.

“He did!” she responded as if it was the first time she was hearing of his death.

It was hard to know if Marilyn understood that Wayne was gone. For a brief moment it seemed like she was fully aware that he died.

A mischievous grin came across her face, the kind of mischievous grin that I had seen on numerous occasions whenever she would speak about her relationship with Wayne in a witty and teasing manner. “Did he have a girlfriend?” she asked.

To which I immediately responded, “No! He did not.”

The grin grew wider. She turned and looking directly at me asked, “Do you want to be my boyfriend?”

“No! I don’t think that would be a good idea,” I said as her grin turned into a broad smile.

“We are planning to have a service for Wayne and you must come.”

We stopped talking for a little bit and just sat. After offering a word of blessing, I bid her aloha.

Wayne was born Harold Wayne Maddux on November 21, 1923 in Breckenridge, Missouri. He died on January 7, 2015 in Kahului. Both he and Marilyn became a part of our church family almost two decades ago.

They were faithful in their weekly attendance for worship, always arriving in time for our choir rehearsal. They sat quietly on the makai side of the church near the window where the floral arrangement is this morning.

They were inseparable whether here at church for our annual lūʻau or out in the community attending concerts at the Maui Arts & Cultural Center in Kahului or activities at the Kaunoa Senior Center in Pāʻia. They were generous in their kōkua for others.

Although Marilyn’s memory continued to decline, she was still able to recognize names. As I look at my own life I realize that my own memory is beginning to fail. Remembering names is becoming more and more difficult.

I find some comfort and consolation in knowing that while we may find ourselves unable to remember the names of those who were once familiar to us, we know that God knows each of us by name. It was the prophet Isaiah who wrote: “But now thus says the Lord, the one who created you, the one who formed you: Do not fear, for I have redeemed you. I have called you by name, you are mine.” (Isaiah 43:1)

Our reading from The Book of Genesis is about the names of those with whom God establishes a new relationship. Abram becomes Abraham and Sarai becomes Sarah.

“To each is added the Hebrew letter ‘Hay’ (similar to ‘H’ in English). Since this letter is one of the three different letters in God’s name (YHWH) – the addition of this letter shows how they feel God is an important part of who they are. The name changes for Abram and Sarai tell us . . . something about their relationship with God and the way they understand themselves.” (Seasons of the Spirit, SeasonsFUSION, Lent, Easter 2015, Wood Lake Publishing Inc., page 55).

“Names are of great significance in this account, as they are throughout the Bible.” (Preaching Through the Christian Year B, Craddock, Hayes, Holladay & Tucker, Trinity Press International, Harrisburg, Pennsylvania, 1993, page 144) What makes the name change critical is that they are names given by God. Abraham and Sarah will become the “ancestors of a multitude of nations” (Genesis 17:5).

“God has promised to become their God. They and their descendants after them have now become God’s people” (Ibid.).

So it is that God has promised to be our God and that we have become God’s people. God’s love for all binds us together. It is a love I saw in Marilyn’s face at the close of our memorial service for Wayne on Friday.

Our choir sang the anthem, “Hear My Prayer.” Choir members who were able to attend the service gathered around the piano. Stephen, our choir director, began to play. Marilyn was seated close by in a wheelchair no more than an arm’s length from the piano.

After the anthem was sung and the benediction was offered, I approached Marilyn and said, “We’re pau.”

Marilyn’s eyes were alert, but not in a wide-eyed way.

Marilyn did not say a word. She looked pensive as though she was engaged, if only for a moment, in deep and serious thought. I thought I might have been imagining what I saw so I asked a second time, “Are you okay?”

She said nothing and seemed to draw deeper into herself.

Then I asked a third time, “Are you okay?”

The time had come to say mahalo to ke Akua for the ways in which all of our lives are bound together by the love of God. The time had come to remember the words of the prophet Isaiah: “Do not fear, for I have redeemed you. I have called you by name, you are mine” (Isaiah 43:1). Mahalo ke Akua. Amen.