The light of day was quickly fading. Our 27th annual lū‘au came to an end just yesterday. The tables and chairs were quickly stacked up under the tent thanks to the instructions from Bruce.

Ashton packed up the sound system he had set up only a few hours earlier. Other tents were taken down and put away for next year. Auntie Edie, Uncle Jimmy and others were busy cleaning up in the kitchen. Paul and his ‘ohana were busy loading up the equipment used for the preparation of the food. 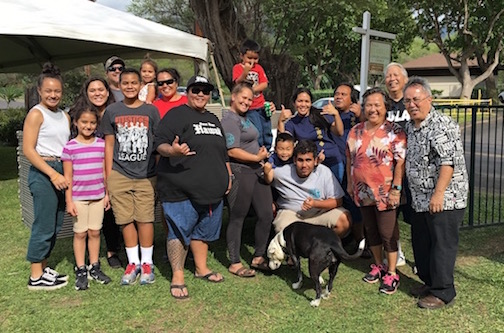 Linda and Jackie took down the exhibit of art work that were on display in this sanctuary throughout the day. Members, friends, visitors and family members all helped with what needed to be done.

By the end of the day, the moments of magic that came from old friends meeting again, the nā mea (the food), nā mele (the music and songs) and the hula that were shared was all pau like the light passing drizzle of rain that came late in the day – each droplet of rain here and then gone. As folks made their way to the parking lot, there were the usual hugs and kisses and words of aloha spoken with genuine affection.

Soon I was finishing up what needed to be done in my office. Larry came in as he does each week to clean the office and the church just as I was about to leave.

As we were talking outside the office door, I heard a woman’s voice calling from the gate by our giant kiawe tree. I didn’t recognize her from across the yard.

“I think you’re the person who was here for the Blessing of the Animals in December,” she said reminding me of our annual gathering that began six years ago.

“I wanted to thank you,” she said. “You blessed our dachshund Mattie. She was 17 years old. She just died. We just buried her.”

“Did you take ashes out into the ocean,” I asked.

“No,” she answered. “We took her down and found a nice spot along the shoreline.”

“I just wanted to thank you! You blessed her before she died.”

We waved to each other and then she turned to leave.

When I got home, I thought about Mattie and as I thought about her, I thought about my dog Kiko. What in the world would two dogs have to do with the Bible verse that is so familiar to those of us who have grown up in the church and to those for whom some have said: “No other verse in the Bible so succinctly summarizes God’s relationship with humanity and the way of salvation.”

“For God so loved the world that he gave his only Son, so that everyone who believes in him may not perish but may have eternal life” (John 3:16, NRSV). That’s the translation from the New Revised Standard Version of the Bible.

Many of us who survived our years in Sunday School remember having had to commit the verse to memory but back then it was from the King James Version of the Bible: “For God so loved the world, that he gave his only begotten Son, that whosoever believeth in him, should not perish, but have everlasting life” (John 3:16, KJV).

The Greek word for world is kosmos and by definition it is said to mean “the sum total of everything, meaning both ‘order’ and ‘world,’ because the ancient Greeks, thanks to Pythagoras in the 6th century BCE, thought that the world was perfectly harmonious and impeccably put in order.” In English kosmos simply means “universe.”

Others say, “Hold on a minute, there is a difference between the two.” Cosmos is a whole harmonious and orderly system that is governed by natural law while “universe” is everything that exists including time and space, matter, and the laws that govern them. In the minds of some theologians, kosmos “denotes the order of the world, the ordered universe, the ordered entirety of God’s creation, but considered as separated from God. The world is the abode of humanity.”

Kosmos is “the order of things in which humanity moves, or of which man (sic) is the center.” And others add, kosmos is “the fallen nature of the human race in its alienation from and opposition to God.” I don’t know about you, but all of this makes my head spin.

I wonder if Mattie and Kiko would not be the first to protest. “Hey, what about us? Don’t we count?”

“Oh, you’re just dogs, hardly the creatures that would be at the center of God’s kosmos.”

In all fairness to those of you who are avid students of the Bible, you know and I know that whether one looks at the English word “world” or the Greek word “kosmos”, our understanding of either word is made clear from the context in which it appears in the Bible. There are biblical scholars who will insist that the world is wicked and alienated from God and it is God’s love manifested in Jesus Christ that will save, not the world, just us. The Hawaiian world is hewa, the world is “wicked” and we must be saved from the ways of the world.

I imagine Mattie and Kiko would beg to differ and we would be quick to dismiss their opinions because they are just dogs. Now, I will confess to you that I am not a student of the language of ancient Greece. I know some of you may want to insist that the verse is clear that whoever believes in God’s only Son will have everlasting life. And I know some of you will say that dogs are instinctive. They know when they need to eat or drink water or do their “business.”

But having instincts is not the same as having the ability to “believe” something or in this case to believe in the gift of salvation. That is a belief we claim for ourselves as human beings.

If there is a lesson to be learned for me after that “across-the-church-yard conversation” about Mattie’s death, it is that we are all a part of the kosmos, a part of the world for which Jesus died. And yes! I include Mattie. I include all of God’s creation; all the birds of the air, the flowers of the earth, the trees, the fish of the sea; the stars, the sun, the moon; every rock, every pebble, every grain of sand.

“For God so loved the world that he gave his only begotten Son, that whosoever believeth in him should not perish, but have everlasting life.” You insist once more, “It is about believing and who among us knows if dogs or any other creatures in creation have the capacity to believe.”

And then I would say, “What good would it be if God’s salvation is only for humankind?” Would we then say, “God’s not interested in saving all of Godʻs creation. God is interested only in saving human beings?”

I suppose if we think we are the center of God’s universe, we would say a definitive “Yes.” But our lives are bound up with all of creation - the canary in the coal mine; the birth defects in frogs in the Amazon; the extinction of flora and fauna that once flourished on the earth. For me the salvation of God is not simply for you and me as human beings but for all of creation.

It was the first time I met a Cavalier King Charles Spaniel. I met her one day on a home visit with someone who adopted her as a canine companion to her mother who was diagnosed with cancer.

The dog was very affectionate and attentive, especially if one was inclined to fawn over her. It was not possible to give her too much attention or get affection in return.

Not long after that visit, I received a telephone call letting me know that her mother died. She said the moment came soon after the dog climbed onto the bed and laid down beside the pillow wrapping herself around her mother’s head. Her mother took a final breath, died, and quietly crossed over to the other side.

Our kūpuna, our Hawaiian ancestors used the metaphor of a fishing net to describe the ways in which all of creation is interconnected. Where the lines of the net intersect is a point that represents you and me and every other human being.

The points represent every creature, every tree, everything in creation. If one was to pull or push on the net at certain point, the rest of the net is affected.

The late Mary Kawena Pukui is a noted Hawaiian scholar and linguist. She wrote, “Come and see how beautiful the world.”

Above the flight of birds,
Below the flowers of the earth,
In the uplands, the trees of the forest,
In the sea, the fish of the sea.
Come and see how beautiful the world.

That is the world for which Jesus died.