“Bread of the World”

I left the office early yesterday to stop by and see her on my way home. The early afternoon traffic was moving quickly across Mokulele. I could see rain clouds over Mauna Kahalawai – the West Maui Mountains.

When I arrived at her room at Hale Makua in Kahului she was fast asleep. I thought it best not to wake her. I stood there for a moment and said a silent prayer.

I turned and walked just outside her room to sit down for a moment. I could hear others across the way talking. I noticed that Christmas lights were still strung around the eaves of the lanai. 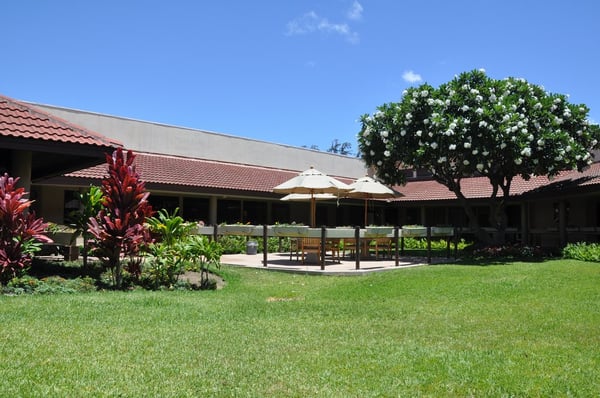 There was an open courtyard landscapes with tropical flowers. The sky was overcast. The humid air suggested that rain was on the way. It was in many ways an ordinary day.

I went back into her room and stood by her beside and then left knowing that she had already defied the odds of survival. She was diagnosed with liver cancer about a month ago and was told she had three weeks to live. She made it to her 93rd birthday last week.

I left and began the short drive to Hale Makua in Wailuku to see someone else. I had heard the day before that she was admitted a few weeks ago. I stopped by the office to get directions to her room. It took me a few minutes to find my way.

“I’m Kahu from church. I came by to see you and see how you are.”

“When are we going to eat?”

“They will come by in a little bit.” I said.

“When are we going to eat?” she asked a second time.

“Can you see me?” I asked noticing that she was not looking directly at me.

I noticed her tapping the fingers of her right hand on her bed. She had suffered a stroke three weeks earlier and was now bedridden.

“I’ll be going in a little bit but I wanted to come by and see you.”

“Where are you going?”

“I have to go home. There are some things I need to do.”

“But I’ll come back another day.”

And so it went. Each time I prepared to leave she would repeat herself. “No, I want you to stay.”

I decided it would be best to quietly step out of the room. As I turned to leave once outside her room, I could hear her saying, “What are we gonna do now? When are we going to eat?”

Centuries ago Jesus prepared himself to make a final journey into Jerusalem to celebrate the Feast of the Passover. It was a time to commemorate the story of the exodus from Egypt – from slavery and certain death into freedom and the promise of new life.

It was a time to share in a meal and to be reminded of that the exodus was done in haste. It was a sudden and unexpected turn of events.

There was no time for the bread to rise. They had to prepare their meal and eat quickly and be on their way.

As the disciples gathered with Jesus in the city, I imagine some of them found themselves asking him, “When are we going to eat?” And after eating, “What are we gonna do now?” I even imagine some of them lifting their voices in protest when Jesus said, “In a little while, I will be leaving you.”

Our reading from The Book of Exodus reminds us that like the lamb that was slain as an offering and whose blood was a sign that God would pass over the homes of the people and spare them from destruction, so it is that Jesus will be offered as a sacrifice so that we ourselves should not perish but have everlasting life.

If the journey out of Egypt was sudden and unexpected, the journey to Jerusalem was one that Jesus anticipated. Jesus’knew that his entry into the city, with all of its pomp and celebration, would be short-lived. He set his eyes not on the city but on a hill outside the city. He knew was going to die and that through this death the world and our lives would be changed forever.

Like Jesus, there will come a time when each of us will find ourselves on a journey to “our” own Jerusalem. It may be that we will know, as Jesus did, that death is not far off.

Perhaps it is enough to say: “Whatever way we enter our Jerusalem – whether uddenly and unexpectedly or with awareness and forethought - we are not alone.”

Rachel and Marilyn know that their journey will soon come to an end. Beyond the city of Jerusalem and beyond the hill called Golgotha, there is the promise a new life. It is a promise that we will celebrate with great joy when we return to this place in three days. Isaac Watts lived from 1674-1748. Among the hymns he composed is the familiar “When I Survey the Wondrous Cross.”

“From sacred head, from hands, and feet, sorrow and love flow mingled down! Did eʻer such love and sorrow meet, or thorns compose so rich a crown?”