“The Death of God” 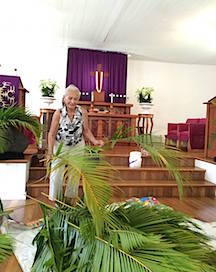 It must have been quite a scene as Jesus made his way to Jerusalem for the Feast of the Passover. “A new colt is pressed into service, the owner being told that the Lord needs it and will return it. Branches cut from the fields after the manner of the celebration of the Feast of Tabernacles (Leviticus23:40). Preceding and following Jesus were the throngs of people who are so often portrayed” in The Gospel According to Mark, “as positive and supportive of Jesus, even though they did not understand his mission. The shout ‘Hosanna,’ which originally meant “save us” – the term has the same root in Hebrew as the word Jesus – probably had become by this time an enthusiastic burst of praise” (Preaching Through the Christian Year B, Craddock, Hayes, Holladay & Tucker, Trinity International Press, Harrisburg, Pennsylvania, 1993, pages 166-167).

Our season of Lent comes to an end today. As we enter Holy Week, Jesus’ final journey to Jerusalem becomes pivotal to our understanding of the turmoil and distress that lay ahead. While we may be tempted to avoid the difficult days that are to come, we are called to go with Jesus into the valley of the shadow of death.

That journey appears not only in Mark. It also appears in the accounts recorded by Matthew, Luke and John (Matthew 21:1-11; Luke 19:28-44; John 12:12-19). What seems to distinguish Mark’s account from the others is the celebration that ensued as Jesus made his way to Jerusalem occurs near the city, but not in the city.

We see Jesus enter the city and the temple alone and then leave with the twelve disciples. It may seem like a manini thing to some – a little thing, an insignificant thing, an inconsequential thing, a tiny thing – but what we are left with in Mark’s story is the reality that the city of Jerusalem itself was not the scene of joyous reception; rather, it was to become the place of controversy, hostility and death. (Ibid., page 167).

The jubilation of the crowds outside the gates of the city who hail Jesus as God’s chosen one is only momentary. We know the city is the stronghold of religious and political leaders who are threatened by his presence. In the city, he will be greeted by angry crowds who will call for his execution.

“Jesus has no real doubt that he will meet a violent death” (Feasting on the Word, Year B, Volume 2, Bartlett & Taylor, Westminster/John Knox Press, Louisville, Kentucky, 2008, page 152). Dr. Margaret A. Farley, a Professor Emerita of Christian Ethics at Yale Divinity School in New Haven, Connecticut, reminds us that we know that when Jesus “enters Jerusalem this time it will be the last time; this is the road to his death” (Op. cit.)

Jesus told the disciples on three previous occasions that he would be “rejected, delivered into the hands of his enemies, be condemned to death, and yet to rise again” (Mark 8:31-32; 9:30-32; 10:32-34). But they were unable to hear and comprehend what he said.

“...until now Jesus has cautioned the disciples and others not to say anything publicly about the great works he has done in their presence. Insofar as anyone did understand who he was, they have been warned to say nothing of what they know or have seen.” (Ibid., page 154)

Now in the week before the annual celebration of the Feast of the Passover, Jesus made the decision to enter Jerusalem in a very public way. The jubilation that accompanied his approach to the city came from those who “want Jesus to be the Messiah. They believe that he is” but eventually they will be disappointed (Christian Century, Chicago, Illinois, March 18, 2015, page 21).

The crowds that greeted Jesus as he made his way toward the city called out to him for salvation. In their understanding of how the world worked this had to come from a king and so for them Jesus was king. But whatever expectations they may have had of him quickly dissipated in the face of his impending death.

The shouts of “Hosanna” on this day will give way to the silenced voices of Good Friday. Professor Farley asks, “...is it possible out of what seems to be a final death there will emerge the ultimate power of life?” (Feasting on the Word, Year B, Volume 2, Bartlett & Taylor, Westminster/John Knox Press, Louisville, Kentucky, 2008, page 154). I do not know about you but for a period in my life it was difficult for me to understand why Jesus had to suffer and die. 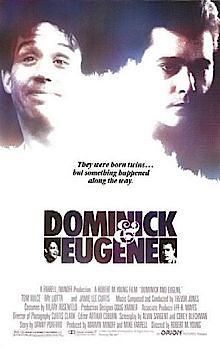 That difficulty was underscored by an American film that was released in 1988. “Dominick & Eugene” is the story of two brothers of the Luciano family of Pittsburg, Pennsylvania. Nicky, played by Tom Hulce, and Gino, played by Ray Liotta, are twin brothers. Nicky is mentally challenged for reasons that become clear towards the conclusion of the film.

They live together with Nicky working as a garbage man to put Gino through medical school. Their relationship becomes strained when Gino must decide between his devotion to his brother or his need to go away to complete his medical training.

Among the various plot lines in the film is a moment when Nicky witnesses the abuse of a little boy by his father at a home along his garbage route. Unable to make sense of what he had just seen, he runs into a church perhaps with the thought of praying and asking God for help.

He slips into a pew and looks up at the cross bearing the weight of a crucified Jesus and in his own anguish declares, “I would never do that to my son.” After seeing the abuse of the boy by his own father, Nicky begins to wonder about his own life.

Later, Gino reveals the truth to Nicky. “You were the one who always stood up to dad,” Gino tells Nicky. He goes on to tell Nicky that one night their father became angry with him and that it was Nicky who took the beating for him that night and that that beating was the cause of his disability.

As odd, as strange, even as heretical as it may sound I have come to believe that for a moment, it was God who died on the cross, not just Jesus. I was struck by an observation made by the writer Elie Wiesel almost a half century ago.

Wiesel was born in 1928 in Romania. During World War II, his family and other Jews from the area where they lived were deported to Hitler’s concentration and extermination camps. 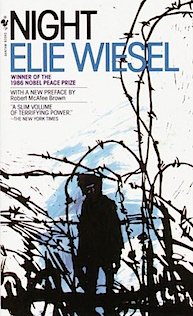 Wiesel was a fifteen-year-old boy when he was separated from his mother and sister as soon as they arrived in Auschwitz. He never saw them again. He would learn later that they were exterminated.

He remained with his father who died in the last months of the war. He and his two older sisters survived.

For ten years after the war, he wrote nothing about the camps. Then in 1955 he wrote a 900-page account of what came to be known as “And the World Kept Silent.” A shorter version was published which he entitled “Night.”

In the years that followed he would become the author of over fifty books. In 1986 he received the Nobel Peace Prize.

In his book “Night”, Wiesel includes a harrowing description of an execution he witnessed. The executions were always by hanging for any offense – stealing a piece of bread, talking back to a guard, not working hard enough, anything.

One day three ropes were hung above three chairs. Two adults and a child were to be executed. The child was a young boy. Thousands of prisoners were lined up to watch. All eyes were on the child.

“Long live liberty!” cried the two adults. But the child said nothing.

The chairs were kicked over. The adults died immediately. But the boy hung there for half an hour struggling as he was strangled by the rope.

The prisoners were ordered to march past the boy and to look at him. As he went by, Wiesel said the boy was still alive, though barely.

The same man asked, “Where is God now?”

But others contend what I contend and that is that his words were literal. God was with that child. God was at the end of that rope. God shared in the suffering and death of the boy. God died.

The great mystery and power of the cross is that God was with Jesus. God was on that cross. God shared in Jesus’ suffering and death. God died.