The season of Easter will soon come to an end. In the years following the death, resurrection and ascension of Jesus, those who were among the early disciples gathered in Jerusalem. There they put all their resources together.

Stephen was one of seven deacons appointed to distribute food and charitable aid to the poorer members of the community in the early church. (Acts 6:5) His work and especially his teachings did not go unnoticed.

Aroused by the opposition of the religious authorities, Stephen is brought before the Sanhedrin or the supreme religious body for questioning. It is there that false witnesses said they heard Stephen say Jesus was going to destroy the temple. (Acts 6:14)

Stephen’s indictment of the religious leaders (Acts 7:51-53) is such that they become furious (Acts 5:33). They cover their ears and they shout out against Stephen in an effort to drown out his voice. They cannot contain themselves. 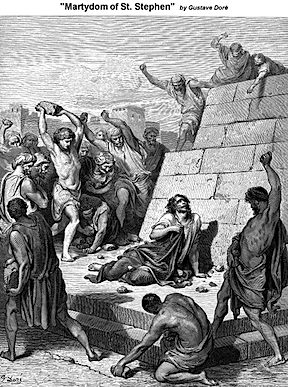 Although Roman law prohibited the Sanhedrin from imposing the death penalty, Stephen is nevertheless dragged out of the city and stoned to death. As a result of his death, Stephen is traditionally regarded as the first martyr of Christianity.

Some say that a martyr is someone who is killed or who suffers greatly for a religion or a cause. Others say it is a person who voluntarily suffers death rather than deny his or her religion.

It is said that Stephen was such a person and so we venerate him. We hold him in high regard insisting that for one to die a martyr’s death as Stephen did is a test of one’s faith.

But I find any eagerness on our part to seek martyrdom troubling and profoundly misguided. We have seen time and time again what happens when social, political and religious ideologies cloud our vision. From the Brown Shirts of Hitler Youth in Germany in the 1930s to the Red Guard in China in the 1960s and the Khmer Rouge in Kampuchea in the 1970s, millions died by execution, starvation and disease for a social or political ideology.

Millions of others have died because of the proclamations made by those in the church who fail to see that a holy war is an oxymoron. This is not to say I do not appreciate Stephen’s courageous faith. He stood up to religious leaders and others in a time of great persecution.

That is what I believe Stephen ultimately did – he lived for Christ. Full of grace and power, he did great wonders and signs among the people. (Acts 6:8)

Stones of death in our reading from The Acts of the Apostles become stones of life in the reading from The First Letter of Peter. We are invited to come to him – to Jesus – a living stone . . . chosen and precious in God’s sight, and like living stones, we are to be built into a spiritual house. (1 Peter 2:4-5)

Chinmoku is a 1996 novel of historical fiction that was written by Japanese author Shūsaku Endō. I had an opportunity to become familiar with his work over forty years ago while I was enrolled in a seminary class on contemporary literature in Japan.

Chinmoku or Silence is the story of a Jesuit missionary sent to Japan in the 17th century. There he endures persecution in the time of Kukure Kirishitan (“Hidden Christians”) that followed the defeat of the Shimabara Rebellion.

The book is written partly in the form of a letter by its central character and explores the silence of God in the midst of suffering. A young Portuguese priest named Rodrigues is sent to Japan to investigate reports that his mentor has committed apostasy.

Father Rodrigues and his companion Father Garrpe arrive in Japan in 1639. There they find the Christian population has been driven underground.

To find the “hidden Christians” local officials force those suspected of being Christian to trample on a fumie, a crudely carved image of Christ. Those who refuse are imprisoned and killed by being hung upside down over a pit and slowly bled.

Rodrigues and Garrpe are eventually captured and forced to watch Japanese Christians lay down their lives for their faith. We may want to imagine that there was glory in these martyrdoms, but there is no glory only the kind of brutality and cruelty that Stephen suffered.

Rodrigues begins to struggle over whether it was merciful to recant when doing so would end another’s person life. When he finally hears the moans of those who have recanted but are to remain in the pit until he tramples the image of Christ, the silence is broken. As he looks at the fumie, he hears the voice of Jesus: “Trample! Trample! I more than anyone know the pain in your foot. Trample! It was to be trampled on by men (sic) that I was born into this world. It was to share men’s (sic) pain that I carried my cross.” Rodrigues obeys, and the Christians are released.