Māhea Uchiyama founded Hui Pā Hula O Leianuenue in 1982. Born and raised in Washington D.C., she was a student of dance since her early childhood and was raised within the discipline of the classical traditions of hula. She received a B.A. in dance Ethnology and an M.A. in Pacific Islands Studies from the University of Hawaii at Manoa on the island of O‘ahu. 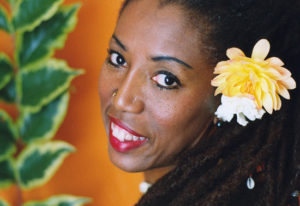 She was my Kumu Hula, my hula teacher for six years from 1984 to 1990 while I was living and working in the San Francisco Bay Area. When I began my studies with her I had already been living in the city of Berkeley for ten years.

At the time I was not sure if I would ever be able to return home to Hawai‘i to work and live. As a consequence of that uncertainty I decided to dance hula, in part to claim my cultural identity as a Native Hawaiian while fully aware that through my parents, I was also Portuguese and Japanese.

Ironically, Māhealani’s ancestors are African and Native American Indian. But it was from her that I was able to lay claim to my identity as a Native Hawaiian through hula. I should add that Uchiyama is her married name.

I have not seen her since I returned home in 1991 but I did hear from her a few weeks ago. I received an email and we are back in touch with each other. Māhea is now the director and choreographer of Ka Ua Tuahine Polynesian Dance Company. In addition to hula, Māhea also teaches the dances of Tahiti, Aotearoa, Samoa and other Pacific Island nations.

Twenty-six years have come and gone. I’ve forgotten all of the hula kahiko or ancient dances and all of the hula ‘auana or modern dances that I learned but I have not forgotten that she was my teacher and I was her haumana, her student, her disciple.

The name of our hālau was Hui Pā Hula O Leiānuenue. Members of the hālau were Hawaiian but also Japanese, Filipino, Chinese, Jewish, African American and more. We were a rainbow people and it was our love of hula that we shared with others. As her haumana, we became engaged in the process of learning what it meant to follow the ways of her teaching through the weekly instructions of language, dance, music and chanting.

Our reading from The Gospel According to Matthew this morning is about what it means for us the follow the ways of Jesus’ teaching. Our reading continues the instructions of Jesus to the early disciples prior to sending them on a mission to proclaim God’s love for the world. The instructions began in last Sunday’s reading from Matthew and will continue through next Sunday. (Preaching Through the Christian Year A, Craddock, Hayes, Holladay & Tucker, Trinity International Press, Harrisburg, Pennsylvania, 1992, page 336)

If we were to take the view that Matthew is giving to the early church - “which is living under social, economic, and political as well as religious pressure - the word of Jesus for their situation, then two benefits follow.” (Op. cit.) The first is that we are better able to understand Jesus’ words for those in the early church.

Our reading provides us with a series of sayings of Jesus found in the partial or modified parallels of his life recorded by Mark, Luke and John and more importantly, and this is the second point, we come to understand that it is Matthew’s gift to the early church and to us. Jesus’ teachings were not only for the Matthew’s church but for us today.

Clearly, we can appreciate the trials, difficulties and faith of the early Christians. But that is not enough. Because it is Scripture, we must come to an equal appreciation for its message to us today.

Given the current social, economic, religious and political climate in the world, we may be inclined to conclude that the opposition is coming from other religions. There are those who are convinced that, as Christians, we are engaged in a holy war against Muslims.

But the opposition is also apparent within Christendom – whether evangelical, fundamentalist, liberal or progressives; Catholic, Protestant or Orthodox- even as they are apparent among Muslims – whether they are Sunni and Shiite. A news report that Saudi security forces disrupted a plot to attack the Grand Mosque in Mecca yesterday just as the fasting month of Ramadan is coming to an end is evidence of that.

Amid whatever opposition we may encounter, Jesus offers words of encouragement. In all that we endure as a result of our proclamation of the good news, God will never abandon us. (Ibid., page 33.) God knows and is concerned about a fallen sparrow and if that is so, God is also concerned about us. God’s care will free us from our fears.

But what is the good news? In his instructions to the Twelve they are sent out to “cure the sick, raise the dead, cleanse the lepers, cast out demons” (Matthew 10:7-8) What is Jesus seeking to teach us and what are we to learn from it? On the one hand, our reading from Matthew contains a number of instructions that seem straightforward. But on the other, there is the scene of domestic strife created by loyalty to him. Why the harsh indictment against loyalty to family?

Some linguists see Jesus’ comments on the family as hyperbole – that they are figures of speech in which the statements or claims are exaggerated and not meant to be taken literally. At the same time, we also know that acknowledging Jesus before others, including our families, can sometimes lead to family strife.

Whatever the case may be, someone else has said that the call to love Jesus “more than one’s family is an indirect way of paying honor to the family. Jesus gave his call for loyalty over against the strongest, not the weakest, claim a person otherwise knew, the claim of family love. Jesus never offered himself as an alternative to the worst but to the best in society.” (Ibid., page 338)

One of the lessons I learned in hula was that the mele or oli, the song or chant sometimes carried a kaona – a hidden meaning. In other words, the listener would hear the words and conclude one thing, but the dancer would know that all the talk of a bird and a flower was really about two lovers. Or in the case of “Kaulana Nā Pua O Hawaiʻi,” someone hearing the melody for the first time would assume that it was a sweet and melodious song about nā pua, the flowers of Hawaiʻi being held in high regard when in fact it was a song written in protest of the annexation of Hawaiʻi to the U.S.

My reading of Scripture has changed over the years because of the lesson I learned in hula. So when I read “A disciple is not above the teacher,” I get it, but when I read “a slave (is not) above the master”, (Matthew 10:24) I wonder how many Americans will point to that verse as a justification for slavery while ignoring God’s words to Moses at the burning bush.

“I have observed the misery of my people who are in Egypt. I have heard their cries on account of their taskmasters, indeed, I know their sufferings.” (Exodus 3:1-12) “Go and tell Paharaoh king of Egypt to let the Israelites go out of his land.” (Exodus 6:10)

What are we to do? I don’t know about you but if we are to go out and cure the sick, raise the dead, cleanse the lepers, and cast out demons, I would probably come up on the short end. Yet, we know the current debate over health care is not simply a political one.

If there is a lesson to be learned, it is that the care of children, those who are poor, disabled, mentally ill, or going through drug and alcohol recovery is critical. We may not have the gift of casting out demons or curing the sick or raising the dead, but we have the aloha to support health care providers who can bring healing to lives of those whom others would cast away.

If we are to live a life of discipleship, we must ho’olohe – listen to Jesus’ teachings not only with our ears but with our hearts and minds and we must hoapili – do. That is more easily said than done especially in light of our reading today. Our discipleship is a lifelong journey of learning.

Without such a commitment it is easy for us to forget and to lose our way. That is a lesson that I learned when my commitment to hula ended. I have forgotten the dances themselves, but whenever I hear the music and see others dancing, I know that my love for hula has not diminished.

While our commitment to being disciples of Jesus may waver from time to time and we may lose our way and forget the lessons learned – we know that the Holy Spirit is always present to remind us of the life of faith we share in his name. May our love for the world for which he died never diminishes.