"As Apostles of Christ"

I received an email the other day from one of our members who lives in Minnesota. “We just got our copy of Maui No Ka Oi magazine and there’s an article on the best of Maui – the church got a full page photo!” 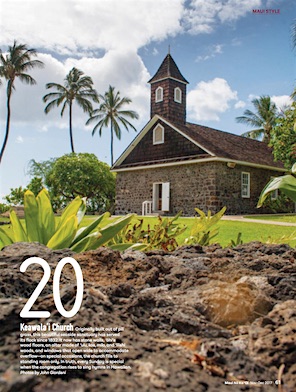 “I’ve been looking thru old albums,” she continued, “waxing nostalgic for Maui – and we’re both wishing we were there already! It’s a gloomy day today with possible rain/slush/sleet snow mix on Friday . . . not enough to cause too much hassle except perhaps on the roads, but it’s a portent of what’s ahead.”

I responded by letting her know that I am also a subscriber of Maui No Ka Oi but that I had not yet received my copy in the mail, despite the fact that I live only a few blocks from the magazine’s office located on Central Avenue in Wailuku. Apparently, the mail is delivered a lot more quickly to folks living in Minnesota than folks living here on Maui.

I mentioned to her that we had just come through a series of thunderstorms that left over 60,000 customers without electricity for over ten hours – no snow just the inconvenience for many on where to find a cup of coffee on their way to work.

The next day she sent another email. “Today is going to be a good day to revisit the magazine as the winds are howling and it’s sleeting – some areas of Minnesota got plow-able snow. We can see it coming down (here) but the grounds too warm for it to stay. Geese are honking and trying to settle the debate about whether or not to take off for the South. . . (but) that would be my vote,” she concluded.

As I thought about our exchange of emails, I became aware that the time and distance between Maui and Minnesota did not diminish her aloha and affection for the church. But I wondered what it was that she was remembering. It was easy to sense between seeing the photograph of the church and looking thru old albums that she held fond memories of our church – this building – and of our church ‘ohana, our church family.

Centuries ago, the Apostle Paul wrote what Biblical scholars believe was his first letter and what has become known as the oldest New Testament document still in existence today. (Feasting on the Word, Year A, Volume 4, Bartlett & Brown, Westminster/John Knox Press, Louisville, Kentucky, 2011, page 206) His letter was filled with his own aloha and affection for the church in Thessalonica.

With the memory of his founding visit (to the church) still fresh in the minds of his readers, Paul recalls the circumstances in which the Thessalonian church was born. By virtue of their existence as “a church of the Thessalonians in God” (1 Thessalonians 1:1), they bore witness to the productivity of his visit, a visit that had not been in vain, despite the resistance of some to the preaching of the gospel. (Preaching Through the Christian Year A, Craddock, Hayes, Holladay & Tucker, Trinity International Press, Harrisburg, Pennsylvania, 1992, page 488)

It was a resistance that he experienced when he preached in Philippi (Acts 16:11-40). In fact, the resistance was so stiff in Philippi, he was beaten and jailed.

There were many who accused him of behaving in ways unbecoming of an apostle (2 Corinthians 2:17-3:2; 4:2-3; 10:7-12). Others accused him of deceit or greed, impure motives and trickery (1 Thessalonians 2:3; 2 Corinthians 12:16) and others insisted that he used flattering words to ingratiate himself to others.

When Paul turns from the accusations leveled against him to his own motives, he seems almost apologetic. He is aware that as an apostle of Christ, the preaching of the gospel calls for courage. It was not a question of relying on his own inner, human resources and finding strength to speak, but rather of relying on the power of God (1 Corinthians 2:5; 2 Corinthians 4:16; 5:5-8).

Instead, Paul chooses gentleness (1 Thessalonians 2:6-7). Rather than unleashing any threats he writes: “ . . . we might have made demands as apostles of Christ. But we were gentle among you . . . ”

He goes on to characterize his ministry with the striking image of a wet nurse “tenderly caring” for children under her care (1 Thessalonians 2:5; 1 Corinthians 3:2; Ephesians 5:29) It is said that this same imagery was also used by Greek and Roman authors to depict the proper way of philosophical instruction – nurturing rather than intimidating. It is a way of caring and nurturing that is sorely lacking in much of our civil, religious and political discourse today. (Ibid., page 489)

Paul makes a clear and unequivocal statement of his commitment to the church and a willingness to give of himself completely (Op. cit.). What are we to say of ourselves as apostles of Christ and of the giving of ourselves to the ministry of this church and other churches near and far to us here in Mākena.

For those of us for whom Maui is home, how might we characterize our ministry here at Keawala‘i? Paul would insist that our proclamation of the gospel be out of courage - giving voice to those who have no voice; out of gentleness for those who have suffered abuse or neglect; out of affection for those in despair and sorrow; and out of self-giving in looking out for the interests of others more than ourselves. Deceit, impure motives, trickery, flattery, greed, or arrogance may be the way of the world, but we are not of the world.

Whether we see a photograph capturing the beauty and simplicity of this church, my hope is our proclamation of the good news of Jesus Christ will be a source of encouragement as we seek to love God with all of our hearts, all of our souls and with all of our minds and to love our neighbor as ourselves. My hope is that we will be a caring and nurturing community of faith that will have an impact on the lives of others near and far beyond our shores.