Today is the First Sunday After Christmas. However, our readings from the Bible are focused on Epiphany, the time when the Christian church proclaims the appearance of the Christ child to Israel and to the nations. 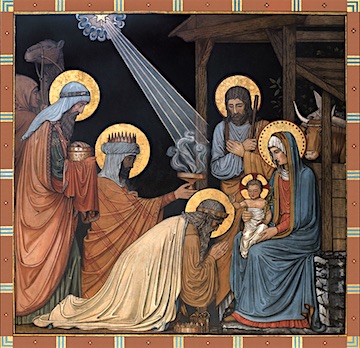 Epiphany started in the Eastern Orthodox Church in honor of the baptism of Jesus. But in the fourth century, it was introduced into the Western Roman Catholic Church where it became associated with the visit of the magi.

But whether we are Christians in the Orthodox, Roman Catholic or Protestant churches, we have grown accustomed to the way in which we have combined the story of the birth of Jesus in The Gospel According to Luke with the story of the visit of the magi in The Gospel According to Matthew. In our effort to harmonize the stories, we fail to take into account the time needed for the magi to travel from the East to Bethlehem or the fact that Mary and Jesus were found in a house, not in a stable (Matthew 2:11) and the age of the children, two years and under, who were to be killed in King Herod’s attempt to destroy Jesus. (Matthew 2:16).

All of this is to say that the shepherds in Luke’s story and the magi in Matthew’s story did not arrive in Bethlehem at the same time. Knowing this, we can more fully appreciate the significance of Matthew’s account of the journey of the magi.

The word epiphany is a transliteration of the Greek verb meaning “to appear openly” (Titus 2:11). (Preaching Through the Christian Year A, Craddock, Hayes, Holladay & Tucker, Trinity Press International, Harrisburg, Pennsylvania, 1992, page 76) It is said that Antiochus, a pre-Christian Syrian ruler, impressed with his own power, assumed the name Antiochus Epiphanes as a declaration that he was the appearance of a god on earth.

It would seem that there are many in our world today who fashion themselves as would-be messiahs or gods on earth – come to save us all – presidents and prime ministers, kings and queens, sultans and emirs, chancellors and supreme leaders. But during this season, our eyes are fixed not on the would-be messiahs of the world but on the one whom the church proclaims Christ Epiphanes.

Our reading from The Gospel According to Matthew is the account in which the appearance of the Christ child caused many in Jerusalem to be frightened, especially King Herod. It was an appearance that attracted the attention foreigners who made what was probably a very long and difficult journey to pay homage to the Christ child.

It was an appearance that brought great fear to some and overwhelming joy to others. For Matthew, Jesus’ birth was the fulfillment of prophecy and he has no qualms with connecting the story of Jesus to the story of Moses and the experience of Israel. “God’s revelation to Joseph in dreams guides Matthew’s story, reminding us that the Old Testament Joseph was a dreamer. Pharaoh killed the Israelite children; Herod killed the children of Bethlehem. Moses led Israel out of Egypt, so Jesus was taken to Egypt and then to the promised land.” (Feasting on the Word, Year A, Volume 1, Bartlett & Brown, Westminster/John Knox Press, Louisville, Kentucky, 2010, page 213)

“Jesus was born in Bethlehem, fulfilling the hopes and expectations of a Messiah from the line of David. At his birth, the magi from foreign lands brought gifts, recognizing that this child would be a deliverer of all nations. He would fulfill the covenant with Abraham, which promised that in him all the peoples of the earth would be blessed.” (Genesis 12:3)

More pointedly, Thomas Troeger, a professor at Yale Divinity School in New Haven, Connecticut asserts: “ . . . far more important than whether there were three magi bearing three gifts” is the intention of the magi to “pay homage” to the Christ child. (Matthew 2:2) In the end, “paying homage to Christ gives the story its purpose, its direction, and its culmination.” (Ibid.)

What is clear about the visit of the magi is this: “On entering the house, they saw the child with Mary his mother; and they knelt down and paid him homage.” (Matthew 2:11) It is only after this act of worship that they presented their gifts of gold, frankincense and myrrh.

Troeger continues, “The order of actions, homage first and gifts second is significant.” (Op. cit., page 217) The magi express their relationship to the Christ child first by kneeling and then by paying homage to him. Troeger goes on to say that “it turns out that the magi’s fourth gift, paying homage to Christ, is in fact their first gift.” (Ibid.)

The magi found their way to Bethlehem by the light of a star. Some have surmised that the light they saw was a conjunction of the planets Jupiter and Saturn. Others say it was a supernova, a star that exploded and gave off an tremendous amount of light over a long period of time. Others have suggested that Halley’s comet could have passed by and that the magi were following that comet.

Whatever the case may be the meaning of the star is evident – we see the light of the Christ child the divine revelation of the Messiah.

I thought about Leonard Cohen again. He died in early November at the age of 82. As we began the season of Advent in late November, a few weeks after his death, I made reference to Cohen’s words of hope in a world of darkness that came through in his 1992 album, “The Future.”

He was a Canadian singer, songwriter, musician, poet, novelist and painter. It was not until 1967 that he launched his music career at the age of 33 and went on to record several albums.

Cohen was Jewish. He studied Zen Buddhism and became a monk for several years. He was fascinated by other religious traditions and I have wondered if he would not have been among the magi who made their way to Bethlehem centuries ago were he living at that time.

I thought about Cohen and about the refrain to the song, “Anthem” and the way in which his poetry has helped me appreciate more fully the journey of the magi. In all fairness to Cohen, “Anthem” was not written with Matthew’s story in mind, but it does include Christian images of doves and bells.

Ring the bells that can still ring.
Forget your perfect offering.
There is a crack in everything.
That’s how the light gets in.

For me, Epiphany is about how a crack occurred in the fabric of the universe, a universe believed to be at least 10 billion light years in diameter, and of how the light of God got into our galaxy and caused the magi to respond to the invitation: “Come to Bethlehem!” Come and see. Forget your perfect offering. Instead, come and worship, worship Christ the new born king!”

Like the magi, we seek the light of God made radiant in the face of the Christ child. So it is that we, too, kneel before him, offering the treasure of our lives and sharing with others the light of God’s love more precious than frankincense, gold or myrrh. Amen.