Sunday, January 8, 2017
The First Sunday After Epiphany
The Baptism of Christ

Thanks to a photograph I received from his mom and dad many, many years ago, I am reminded of what may have been their son’s first Christmas. Ryan was dressed in shorts, a white short-sleeved dress shirt and plaid vest. I held him in my arms one Sunday morning as we sat beside our Christmas tree that was set up just to the right of our altar. 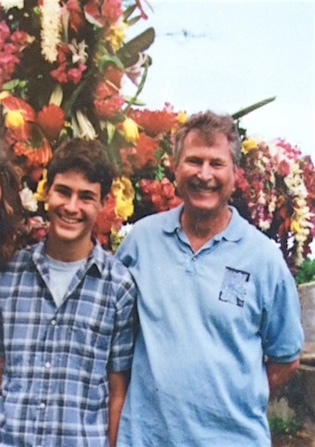 In the years that followed, Ryan grew up and graduated from high school. He moved to Santa Barbara, California to attend college. He graduated on time and on budget and recently returned home to Maui. He has been spending his days working on one of the boats at the Pacific Whale Foundation in Ma‘alaea.

During our annual Christmas Eve Candlelight Service a few weeks ago, Ryan assisted his dad with our outdoor projection system. Some of you will remember that there was a bit of glitch with the system at the conclusion of the service which they had to correct - and they did.

But what I remember most that evening was not the momentary glitch in the projection system, but how quickly the years had gone by. The 1-year-old baby was now a young man.

Last Sunday, our reading from The Gospel According to Matthew included the story of the Epiphany or visit of the magi to the home of Mary, Joseph and Jesus in Bethlehem. It is very likely that Jesus was around Ryan’s age, if not a little older, when the magi arrived.

Today is the First Sunday After Epiphany. Jesus is no longer a child. He is now a young man, like Ryan.

Our reading from The Gospel According to Matthew is an account of Jesus’ baptism. Rodger Nishioka was serving as an Associate Professor of Christian Education at Columbia Theological Seminary in Decatur, Georgia when I heard him speak at a conference in Honolulu several years ago.

Since then I have come across his writings in numerous articles and books. In one book, Nishioka writes: “In Matthew’s text, the baptism of Jesus is not the ending of his ministry. In Matthew’s text, the baptism is the beginning of his ministry. It is his launching. It is his commissioning to begin the public ministry for which he was created and to which he was called.” (Feasting on the Word, Year A, Volume 1, Bartlett & Taylor, Westminster/John Knox Press, Louisville, Kentucky, 2010, page 238)

In our reading from The Acts of the Apostles, the sermon attributed to the Apostle Peter, conforms with the account in Matthew. We see, as others see, that the moment of his baptism was an inaugural event, a time of beginning, which not only set Jesus’ ministry apart from the work of John the Baptist but also marked a beginning in its own right.

Perhaps today’s readings could not be more timely given the inauguration that will soon mark the commencement of a new presidential four-year term here in the United States. No one nominated or elected Jesus.

While some may want to insist that one inauguration is political and the other is theological, the truth is both events mark the beginning of those who are elected and those who are called to a life of service and sacrifice. What is evident at the inaugural event of Jesus’ baptism is the tension that remained constant throughout the three years of his ministry.

“Jesus’ uniqueness is known in and shouted from the heavens – a higher authority, there is not! But his own baptism and ministry are characterized by a consistent and conscious submission to those for whom he is bringing the gospel.” (Feasting on the Word, Year A, Volume 1, Bartlett & Taylor, Westminster/John Knox Press, Louisville, Kentucky, 2010, page 241)

We can only hope and pray for leaders – religious and political - whose lives are marked by service and sacrifice, not for their own self-aggrandizement but for the glory of God made known to us in Jesus Christ. Jesus did not undertake his life of service to increase his wealth, prestige or power. He did not seek to draw attention to himself. How can that be, we wonder? Matthew tells us that when Jesus was baptized, the heavens opened up and the Spirit of God descended like a dove and alighted on him. A voice from heaven said, “This is my Son, the Beloved, with whom I am well pleased.” There was reason enough for Jesus to be puffed up.

But the mark Jesus’ life of service and sacrifice to others was what the Rev. Dr. Troy Miller at the Memphis Center for Urban Theological Studies in Tennessee says was Jesus’ “utter humility.” (Op. cit.) It was a humility touched and guided by the Spirit of God at his baptism.

The fruit of that Spirit was not reflected in aggressive, ruthless or manipulative patterns of relating to others. The Bible teaches us that the fruit of the Spirit is not, among other things, “enmities, strife, jealousy, anger, quarrels, dissensions, factions, envy . . . and things like these.” (Galatians 5:20-21)

Instead, the fruit of the Spirit is “love, joy, peace, patience, kindness, generosity, faithfulness, gentleness and self-control. If we live,” as Jesus lived, “by the Spirit,” then we must also be guided by the Spirit. We must not become conceited, competing against one another, envying one another. (Galatians 5:22)

Peter reminds us in his sermon that it is after Jesus is baptized that he embarks on his ministry of “doing good and healing” others through the power and presence of the Spirit. (Acts 10:38) “It is truly the inaugural event of [Jesus’] life and ministry and for this reason [his baptism] was often seen in the early church as the moment when he really became the Son of God.” (Preaching Through the Christian Year A, Craddock, Hayes, Holladay & Tucker, Trinity Press International, Harrisburg, Pennsylvania, 1992, page 81)

“So let us not grow weary in doing what is right, for we will reap at harvest time, if we do not give up. So then, whenever we have an opportunity, let us work for the good of all ... ” not just some or most or for those we favor, but for all. (Galatians 6:7-10) May we always lay claim to our own baptism and do good through the power and presence of the Spirit in our own lives.