Baptism of Our Lord

"God is on the Loose" 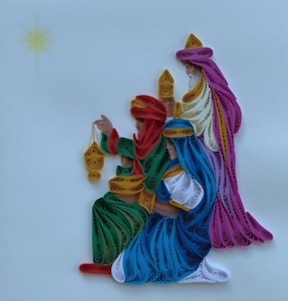 January 6 – also known as the Feast of the Epiphany – just so happens to be my favorite day in the liturgical calendar. Randy surprise me with a beautiful card depicting the Magi, bearing gifts on bended knee having been guided by a star to the infant Christ. I had a lovely early morning swim in the ocean frolicking with the turtles with an ever-present eye out for nearby whales.

But what began as a beautiful day changed very quickly as the events in Washington D.C. unfolded. Within minutes my heart sank as I watched in horror an angry mob storming the Capitol building. And I wondered – all the while not being completely surprised – “what has become of the soul of our nation?”

Just an hour later, I opened our Keawala`i Zoom Room and was met immediately by concerned faces – several gathering with one eye glued to the television yet sensing the need to be with our `ohana as we wondered what I had questioned earlier – “what is happening to our nation, our democracy – and to us as citizens of the United States of America?”

And so, after allowing for some time for reaction and response to what we were all witnessing, I asked those gathered on our Zoom session what I often do, but this time with a bit more intentionality. My question, “How is it with your soul? How is all of this affecting you, your faith?” And “What are we called to do as people of faith in response to what we are seeing?”

Given what we had just witnessed, I wondered, how all this was being perceived by those gathered who I consider to be under my care as their pastor.

I think my questions were a bit premature. No one really had well-formed answers and I certainly did not have my own thoughts very clear, but I wanted us to move away – temporarily – from the political fray that had captivated our attention in order to take our own pulse. “How was all this affecting me, my faith, and my relationship with God. And where was God in all this?” I wondered.

After our Zoom Room meeting I re-read the stories which you heard just moments ago. A story from the book of Genesis whose opening words describe “In the beginning” and offer a mythic account of the creation of the universe – where order was wrought out of chaos when God divided light from darkness – and proclaimed that it was good.

And then, a story of continuing creation – the creation of a possibility for new life – as Mark begins his gospel – complementing the book of Genesis, “In the beginning of the good news of Jesus Christ, the Son of God.” Once again, order was wrought out of chaos as God offered a light that would shine in the darkness, and reminded us all, once again, “This is my Son, my beloved.” And God proclaimed that it was good.

But what I witnessed on Epiphany was not good. What I saw unfolding on live television was not the right of citizens in a healthy democracy – peacefully protesting what they believed to be wrong or unjust. What I saw was an angry mob, incited by their political leader who seemingly will stop at nothing to maintain power – even at the cost of human life. What I witnessed on Epiphany was, indeed, revelatory in a most disturbing way. I witnessed evil – unmasked – fearless – and with no respect for civility, democracy, or human life.

I turned, once again, to the bible – for this is where I prayerfully look for guidance in good times and in bad. I would not be disappointed.

I was specifically drawn to the baptismal story of Jesus. Notice how it unfolds in Mark. As in the other gospel accounts, John makes his “Message” very clear that he is NOT the one they are seeking as Messiah. He, John, ONLY has the ability to baptize with water – an act that follows repentance. But Jesus will bless and baptize with the Holy Spirit – changing folks (and I love how Eugene Peterson translates this) “from the inside out.”

Jesus came from Nazareth in Galilee to be baptized by John. There have been all sorts of scholarly speculation of the necessity and efficacy of that humble compliance, but that misses the point. It’s what happened in that moment AND after Jesus’ emerges from the River Jordan that is most interesting. Mark describes it as the “sky splitting open.” Other translations record it as “the heavens were torn apart.” And the “Spirit descended – like a dove.” As God’s voice was heard and affirmed Jesus as “God’s Son, chosen, marked by love, pride of God’s life.”

Or as Professor Don Jewell has written this is “God on the loose.”

But that leaves us with the nagging question – if all this is true, just where has God been in the events of the past several days? It’s an important question – but, I believe, there is an answer.

To be sure, God does not enter the world like some Superhero complete with cape and sword and other-worldly strength. On the contrary, God comes into our world as a humble servant – but with the INNER strength to stare into the face of evil and to call it out. Love coupled with Truth can do that. Love coupled with Truth has the power to stare down and overcome any form of evil.

If you read just a little further in Mark’s gospel, you would see that immediately after this holy affirmation by God, Jesus makes his way into the wilderness where he is confronted by evil – tempted with the lust for power and the ability to demonstrate worldly strength. But love does not succumb to such beguiling. Love looks into the face of evil and says – “NO!” That’s not how God operates. Neither should we.

I believe that’s precisely where we find ourselves today. As disciples of Jesus Christ, we have an important – we have a VITAL role to play. God IS on the loose and very present in our world right now. Each one of us embody an element of that “holy presence.” We each carry God within us. It was announced at OUR baptism. As water was sprinkled on our foreheads or we were submerged completely. In that moment – with a cloud of witness surrounding us we were set apart, as Spirit was invoked and the words were spoken,


“Member of the Church.”

We carry that gift AND the accompanying responsibility as bearers of the gift. We who call ourselves Christian have a tremendous responsibility. As disciples of Jesus Christ, we, too, are called to couple Love and Truth as we confront the fleeting power of evil that is ever-present.

As God lives in us we must stand for what is true, loving, just, and peaceful.

When Jesus called his disciples, he never said it was going to be easy. As ones who continue that walk in Jesus footsteps, let us never forget we have been blessed by grace, and we will be given, as our United Church of Christ Statement of Faith proclaims, “courage in the struggle for justice and peace,” as we “accept the cost and joy of discipleship.”

God is on the loose. That truth is our hope. That assurance is our strength. May you never doubt or forget that.