Third Sunday After Christmas
The Baptism of Christ
Sunday, January 11, 2015

“The Spirit of God”


Arthur Gordon Linkletter was a Canadian-born American radio and television personality. Known simply as Art Linkletter, he became famous for interviewing children on House Party and Kids Say the Darndest Things. Those interviews led to a series of books in which many of the children were quoted. 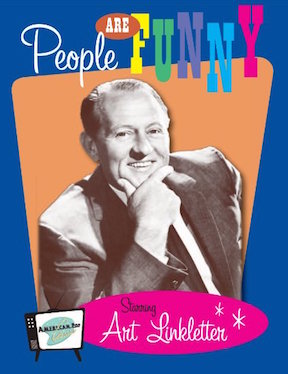 People Are Funny became a television show in 1954 I was all of five years old. The show ran for seven years and ended just as I was about to enter junior high school.

I remember watching his interviews with children on our black and white television set. I always think about that television show whenever I read the story of the baptism of Jesus in the Bible.

“What possible link could there be between the two” you may ask? Whenever the story of Jesus’ baptism was shared in Sunday School, I would always ask my teacher, “But why was Jesus baptized? Everyone says we have to repent of our sins and then we are baptized. If that’s true then that means Jesus was a sinner too. He had to repent in order to be baptized.”

“But everyone says ‘No, he was not a sinner. He was perfect.’”

I may have been a little precocious at age five. I am sure my Sunday School teachers were thinking more harshly about my nagging questions and would not have been inclined to just say, “That kid says the darndest things.”

While Linkletter’s surprise always turned to amusement, my teachers’ faces – I asked the question of more than one teacher – always turned into a frown. But I really wanted to know.

It occurred to me years later that for those who were in the church in the first century, Jesus’ baptism became a problem for them as well. Why would the Son of God be baptized? In Matthew’s account of Jesus’ life, he was sensitive to the problem. It is reflected in John’s hesitancy to baptize Jesus (Matthew 3:14).

In the account recorded by Luke, Luke makes no mention of who baptized Jesus but instead joins the baptism to the proclamations and prayers offered by John as secondary to God’s primary witness of Jesus: “You are my Son, the Beloved; with you I am well pleased” (Luke 3:21-22). It is said that later Christian documents glorified the entire scene with bright lights and fire over the surface of the water (Preaching Through the Christian Year B, Craddock, Hayes, Holladay & Tucker, Trinity Press International, Harrisburg, Pennsylvania, 1993, pages 75-76).

For Mark, the baptism of Jesus was an epiphany – a declaration that Jesus was the Son of God. There is no tension of the sort that seemed to plague my Sunday School teachers when year after year I would relentlessly ask the same question: “But why was he baptized?

I imagine Mark would not have been amused by my question. Interestingly, he does not think it necessary to even address the question that was probably raised by others in the early church.

It was John who proclaimed, “The one who is more powerful than I, is coming after me. I have baptized you with water; but he will baptize you with the Holy Spirit.” (Mark 1:7,8). In our reading from The Acts of the Apostles, the Apostle Paul questions some of the disciples in Ephesus about their baptism.

“Did you receive the Holy Spirit when you became believers?” he asks assuming they have been baptized.

“They replied, ‘No, we have not even heard that there is a Holy Spirit.’”

“Into what then were you baptized,” he asked.

“Into John’s baptism,” they answered.

“John baptized with the baptism of repentance, telling the people to believe in the one who was to come after him, that is, in Jesus” (Acts 19:1-7).

To underscore his point about the baptism with the Holy Spirit, Paul writes: “ ...they spoke in tongues and prophesied.” (Acts19:7). There are those in the church today who will argue that the ability to speak in tongues and to prophesy are the only sure and certain signs that a believer has received the Holy Spirit.

Thankfully, it is the Apostle Paul who also reminds those in the early church in Galatia and in the church today that the evidence of the Spirit’s presence in the lives of believers is not whether one speaks only in tongues and prophesy, but if there is evidence of “love, joy, peace, patience, kindness, generosity, faithfulness, gentleness and self-control” (Galatians 5:22-23). In the same way that Jesus was baptized with water by John in the Jordan and in the same way that he was commissioned for ministry by the power and presence of the Holy Spirit in his life, so it is that when we were baptized by water, we were also commissioned by the power and presence of the Holy Spirit for a life of service.

But if we choose darkness then there will only be “fornication, impurity, licentiousness, factions, envy, drunkenness, carousing, and things like these” (Galatians 5:17). It would seem that we live in a world that is overcome by darkness – the recent killings in Nigeria, France, and Yemen; the senseless gun violence across the U.S. week after week – it would seem there is no room in the world for the Spirit of God.

In the account of Jesus’ baptism that is recorded by Mark, Jesus will be more powerful than John. Jesus will do battle against demons and all the evil forces that maim, cripple, alienate and destroy human life. His life will not be an arrogant display of power but a life empowered by the Spirit of God. (Ibid., page 76)

As believers, as disciples, as followers of Jesus we have come to associate our baptism with the commission to serve and to also do battle against the forces in the world that seek to destroy all of God’s creation. Jesus’ baptism marked the beginning of a new age, one in which the presence and power of the Holy Spirit is what has been made available to all of us through our own baptisms. Our baptism has transformed us into God’s beloved children.

I thought about Uncle Jimmy Kapohakimohewa this morning. Uncle Jimmy is no longer with us. But years ago, before his death, I met Uncle Jimmy and Auntie Judy at their home in Kula one Christmas season.

I was there with a videographer and we were to interview him and later several other kupuna or elders about their childhood memories of Christmas. Auntie Mele Martin, Auntie Caroline DeLima and Auntie Kealohaʻāina Coykendall are no longer with us. Uncle Boogie Luʻuwai is the only one who is still with us. He now lives in Kapolei on the island of Oʻahu.

When we arrived at Uncle Jimmy’s house, I noticed train tracks around the Christmas tree. On it sat a beautiful toy train. Seeing the toy train reminded me of the dream I had as a child of having a train set of my own some day.

I don’t remember the Christmas day I found the gift of that train set under our tree, but I was overjoyed. Unfortunately, my joy quickly turned to a momentary disappointment. There were no batteries.

From a child’s point of view I have come to conclude that the gift of the Christ Child given to all of us on Christmas day will live and thrive with the power and energy that the Spirit of God provides in the same way that a pair of batteries will give life and movement to a toy train. That gift given to Jesus at his baptism is the gift given to us at our baptism. It is that gift that will give us the strength and power to live the life of faith we declare.