The First Sunday After Epiphany
The Baptism of Christ
Sunday, January 12, 2014

“A Voice from Heaven”

Someone liked the story I shared with some of you last Sunday about a recent episode I had with my dog Kiko. I decided it is worth repeating today. Throughout the week I’ve shared the story with others and each time the story has been embellished. I realized as I was preparing for our time this morning that the embellishments have continued but the heart of the story – the punch line, if you will - has remained the same. 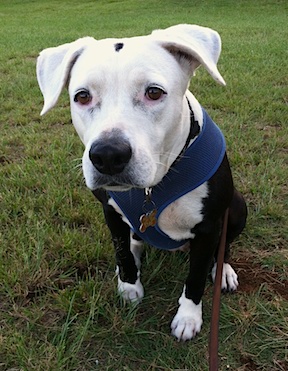 Kiko and I made the drive on a late afternoon from Wailuku to Mākena the other week so I could catch up on some work in the office. But before the work began I took her for a sunset walk on the Maluaka Beach. She ran up and down beach, rolled in the sand, jumped over the shore break, barked and did her “business.”

Once back here at the church I hosed her down, toweled her dry and fed her. It was not long after that that she climbed up onto the chair in my office, curled up, let out a deep sigh, closed her eyes and fell asleep.

I turned to my work and in what seemed like the wink of an eye, two hours had gone by. I began to hear the wind outside and remembered that the weather forecast called for rain. It sounded like the storm clouds were gathering. I decided I would take whatever unfinished work I had home with me.

I shut down my computer and packed things up. Kiko could hear me stirring and she woke up.

“We need to go,” I said with some urgency in my voice.

Kiko stepped off the chair and onto the floor. I set the alarm and opened the door - fumbling with my briefcase and her “doggy” bag – and quickly locked the door.

The rain clouds had darkened the night sky. I called out to her. There was no response. Nothing.

I turned on the flash light on my cell phone and noticed the gate near the giant kiawe tree was wide open. That was the only invitation she needed to take off running down the road to the beach.

I mumbled a few unkind words under my breath, set things down and made my way towards the gate. The security guard from the hotel came by to lock up the beach access parking lot and restrooms.

“Oh, I’m looking for my dog. She took off,” I explained. “If you see her, let me know. She has a white head and black body with white paws and a white tip at the end of her tail.”

Just then we heard a dog barking.

“Nope,” I said, “It sounds like the Garcia’s dog across the street.”

“Anyway,” I added, “I’m gonna walk down to the beach and see if she’s there.”

I walked down and back. Nothing.

A few weeks earlier she managed to walk towards Mākena Landing on a Sunday morning before the start of our early service. Someone saw her at near the intersection at Honoʻiki and Mākena Road. So I decided to get in my car and drive in that direction.

Nothing. I returned feeling frustrated that I had not leashed her before leaving the office and thought, “Well, she’ll come back on her own soon enough.”

About 20 minutes had gone by in my futile search. I decided to go back into the office to do more work.

I stuck the key into dead bolt and unlocked it and then into door lock and turned it. When I swung the door open I saw Kiko inside the office sitting on her back side, looking up at me and I was certain I heard her say, “Dude! You locked me in the office. What’s up with that?”

“I’m so sorry,” I said. “You were so smart not to move for the last 20 minutes. Otherwise the alarm would have gone off and the police would have come by.”

This time I was sure she said, “Duh! Do you think I’m stupid?”

Well, needless to say I learned a lot about myself in those twenty minutes – about how it felt to be upset, frustrated and angry. I also learned that on occasion we “hear” with our eyes and not necessarily with our ears.

I could “hear” Kiko by seeing the bewilderment on her face.

Each year one of the accounts of Jesus’ baptism serves as the Gospel lesson for the First Sunday After Epiphany. The Gospel According to Matthew provides us with Matthew’s record of the event. It is especially appropriate because in Matthew’s account it is said that “a voice from heaven” publicly proclaims Jesus as God’s “Beloved Son.” (Matthew 3:17) Whether or not that voice is heard by all who were at the river that day is unclear.

What is clear is that they “heard” the proclamation with their eyes. Something happened that day – it was an epiphany. They saw an appearance or manifestation of God in Jesus Christ.

Some Biblical scholars contend that what was said was meant for only John the Baptizer to hear. Matthew is the only one who records the voice from heaven saying, “This is my Son, the Beloved, with whom I am well pleased,” as though it was directed only to John. (Matthew 3:17)

Whatever may be said about who heard what on that day, all of the accounts of Jesus’ baptism share a common affirmation. The heavens opened up - a sign associated with divine revelation; the Holy Spirit descended upon Jesus in the form of a dove, empowering him for the ministry set before him (Matthew 3:16, 4:17); and a voice from heaven declared him as the Beloved Son.

What becomes important for Matthew and for us is not simply the baptism itself but the proclamation that followed and the understanding that Jesus’ baptism marked the beginning of his ministry. “It was,” as someone pointed out, “the beginning of the remarkable journey that was to lead him to the cross and beyond.” (Rodger Y. Nishioka, Feasting on the Word, Year A, Volume 1, Bartlett & Taylor, Westminster/John Knox Press, Louisville, Kentucky, 2010, page 240)

So it is with our baptism. Our baptism marks the beginning of a lifelong commitment to ministry. Today marks the end of “Hepedoma – A Week of Prayer”. Throughout the week we have invited members and friends to be in prayer about the ways each may serve in the various ministries of this church.

What matters is not what John heard with his ears but what he “heard” with his eyes. It is John who declares, “I myself have seen and have testified that this is the Son of God.” (John 1:34)

For John and for us, Jesus is the One who is the Light of the World. He is the One whom we are called to follow so that we may be, as the prophet Isaiah proclaims, a light to the nations - to open the eyes that are blind, to bring out those who sit in darkness, to bring forth justice.