This year, 2018, marks the 50th anniversary of the assassination of the Rev. Dr. Martin Luther King Jr. Dr. King was shot and killed on a balcony at the Lorraine Motel on April 4, 1968 in Memphis, Tennessee as he was preparing for a march on Washington D.C. that was to be called the Poor People’s Campaign. 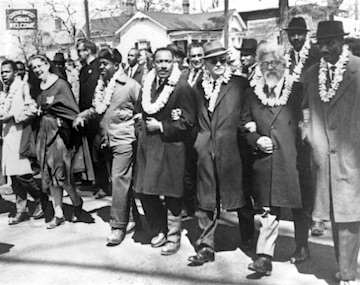 Tomorrow is Martin Luther King Jr. Day, the day when over 100 nations around the world will commemorate his birthday and honor his legacy of nonviolence and civil disobedience that brought an end to segregation in the United States and the passage of the Voting Rights Act of 1965 that prohibits racial discrimination in voting. The Martin Luther King Jr. Center for Nonviolent Social Change in Atlanta, Georgia announced that the global theme in honor of Dr. King is: “Together we win with love for humanity.”

In many ways it is an invitation and proclamation that is sorely needed in our country and in our world today. The message is unmistakably clear. The foundation for the commitment to change is love – not a love that is sentimental or saccharine, but a love that comes from the Greek word agape – God’s love - a love that is unconditional.

Several years ago, a man visiting Maui from another part of the U.S. happened to be with us during our time of worship over the long weekend of the holiday marking Dr. King’s birthday. I shared my mana‘o, my thoughts and feelings about the legacy of Dr. King and the ways in which he affected my own life and the life of the nation.

I greeted the man at the front door that morning at the close of the service. After I said “Good morning” to him, he expressed his feelings without hesitation. “I am sick and tired hearing about King.” Then he leaned over and in a voice filled rancor meant to dismiss the courage of Dr. King in such a tumultuous time said: “You know he was a communist!”

Needless to say, I was shocked and stupefied.

Dr. King understood the “cost and joy” of his discipleship in Jesus Christ. He paid the ultimate cost on that balcony in Memphis fifty years ago.

Of his own commitment to Jesus Christ, Dr. King said: “My call to ministry was not a miraculous or supernatural something. On the contrary it was an inner urge calling me to serve humanity” - knowing that serving others would be he would be serving God.

I do not think that he would have been dismayed by the man that I greeted at the door that Sunday morning. Dr. King may have said to him what he said at another point in his life: “We must live together as brothers or perish together as fools.”

Our readings from The First Book of Samuel and The Gospel According to John relates the call to service that Samuel as well as Philip and Nathanael received. I am certain that King was familiar with both readings.

Samuel was conceived by Hannah as a child of promise (1 Samuel 1). Until Samuel’s birth, Hannah was barren. She made a promise that as result of the gift of Samuel’s birth that she would present her son to the service of God at the temple in Shiloh, then under the care and service of the old priest Eli and unfortunately his decadent sons (1 Samuel 2:12-17)

Samuel responded to the call by God with great enthusiasm. The fact that God called three times without the source of the call being recognized, that Samuel thought it was Eli, and that the priest only slowly realized that it might be God speaking to Samuel were all dramatic touches in the story. Eli’s confusing response is not a condemnation of him so much as to illustrate the point made in the opening verse: “The word of the Lord was rare in those days; visions were not widespread” (1 Samuel 3:1) (Preaching Through the Christian Year B, Craddock, Hayes, Holladay & Tucker, Trinity Press International, Harrisburg, Pennsylvania, 1993, page 77).

In his old age and with eyesight so dim Eli could not see. He hardly expected any word or vision from God. Even though Samuel did not realize the source of the voice addressing him, he nevertheless offered himself to Eli with great fervor, “Here I am” (1 Samuel 3:18; Isaiah 6:8).

God’s word to Samuel about the future was a word of judgment, a word condemning the house of Eli, and it was Samuel who must be the bearer of the word to those under whose service he labored (1 Samuel 10:12-18) (Ibid., page 78). We learn from our reading that as Samuel grew up, God was with him and did not let his words fall to the ground unfulfilled.

Once Samuel was aware of the source of the voice, he responded with a promise, “Speak, for your servant is listening” (1 Samuel 3:10). It was Samuel’s proclamations and actions that established his reputation as a prophet throughout Israel – so that his work brought a reversal of affairs in the nation.

As much as any of us would admire Samuel’s stature as a prophet and servant of God, Dr. King said: “Everybody can be great because anybody can serve. You don’t have to have a college degree to serve . . . You only need a heart full of grace. A soul generated by love.”

That may well be what drew Philip, Nathanael and many others to Jesus centuries later. Our reading from The Gospel According to John began last Sunday with the witness of John the Baptist at Jesus’ baptism. It is John’s testimony that caused two of his disciples to follow Jesus (John 1:35-42). They in turn witnessed to their friends (John 1:43-51) who then widened the circle to others.

It was in Bethsaida in Galilee that Philip invited Nathanael to “Come and see” Jesus. The word to Nathanael was that Jesus was the promised Messiah. Upon hearing that Jesus was from Nazareth, Nathanael’s response was perhaps not unlike anyone who evaluates the worth of another person “by place of origin, residence, family, education, and station” (Ibid., page 81). Sound familiar?

We may want to excuse Nathanael’s remark by insisting that he is “honest enough to express his amazement that God’s Messiah could come from an insignificant village” but the Rev. Elton W. Brown, a United Methodist pastor asserts that the account suggests two claims: “First, God can accomplish great things in unlikely places. As is often the case, we are enabled to see the irony of Nathanael’s question: ‘Can anything good come out of Nazareth?’ The answer is, ‘Indeed.’ The second claim may be that God is perfectly capable of honoring ordinary people and apparently insignificant places.”

Like Samuel who brought a word of judgment to Israel, so it was that Dr. King brought a word of judgment to the U.S. “There are two types of laws,” Dr. King said, “ just and unjust. I would be the first to advocate obeying just laws. One has not only a legal but a moral responsibility to obey just laws. Conversely, one has a moral responsibility to disobey unjust laws. I would with agree with St Augustine that “an unjust law is no law at all.”

As for those who insist “the law is the law” Dr. King said: “One has a moral responsibility to disobey unjust laws. One who breaks an unjust law must do so openly, lovingly and with a willingness to accept the penalty. If we do not act, we shall surely be dragged down the long, dark and shameful corridors of time reserved for those who possess power without compassion, might without morality, and strength without sight.”

“Injustice anywhere is a threat to justice everywhere.

The psalmist reminds us that we are all known and loved by God. The invitation to a life of service is not only to Samuel, Philip and Nathanael but to each of us. I am certain they would have understood the words of Dr. King and what a life of service required: “If you can’t fly then run, if you can’t run then walk, if you can’t walk then crawl, but whatever you do you have to keep moving forward.”

“When Jesus saw Nathanael coming toward him, he said of him, ‘Here is truly an Israelite in whom there is no deceit!’ Nathanael asked him, ‘Where did you get to know me?’ Jesus answered, “I saw you under the fig tree before Philip called you’” (John 1:47-48).

Amazed by Jesus’ response, Nathanael is convinced that Jesus is the Son of God, the King of Israel.

Jesus answered, “Do you believe because I told you that I saw you under the fig tree? You will see greater things than these.” (John 1:50).

Like Philip and Nathanael, we too will see “greater things.”

There is a hymn in our New Century Hymnal that was composed by Jim Strathdee in 1969, the year following Dr. King’s assassination. It is based on a poem by the Rev. Dr. Howard Thurman. It was Thurman who established The Church of the Fellowship of All Peoples in San Francisco with Dr. Alfred Fisk in 1944. It became the first interracial and interfaith congregation in the U.S.

These are Strathdee’s lyrics adapted from what is known as Thurman’s “Christmas poem”:

“When the song of the angels is stilled,
when the star is the sky is gone,
When the sages and the shepherds have found their way home,
the work of Christmas is begun.

To find the lost and lonely one,
To heal the broken soul with love
To feed the hungry children with warmth and good food,
To feel the earth below, the sky above.

To free the prisoner from all chains,
To make the powerful care,
To rebuild the nations with strength of good will,
to see all God’s children everywhere.

To bring hope to every task you do, to dance at baby’s new birth.
To make music in an old person’s heart,
and sing to the colors of the earth!”

“‘I am the light of the world!
You people come and follow me!’
If you follow and love you’ll learn the mystery
of what you meant to do and be.”