Second Sunday After Epiphany
The Baptism of Christ
Sunday, January 18, 2015

“The People of God”


We live in a world of acronyms thanks in large part to our reliance on technology as the primary mode of communication. A glossary of text-speak includes several thousand acronyms and abbreviations both alphabetical and numeric that have become a matter of course with the use of cell phones.

This is the second Sunday after Epiphany. Our reading from The Gospel According to John places us between an understanding of who Jesus is and our response to that understanding.

In a way it may seem like “the sheer multiplicity of words about Jesus” is perhaps comparable to the multiplicity of text-speak which permeates our lives today both inside and outside of the church.” (Feasting on the Word, Year B, Volume 1, Bartlett & Taylor, Westminster/John Knox Press, Louisville, Kentucky, 2008, page 263) We find ourselves having to decipher what it is that is being said. To say that our relationship with Jesus is comparable to saying: “We are BFF – Best Friends Forever” would be to reduce the wonder of the Word made flesh to only a human identity.

“The talk about Jesus comes to a head when he refers to himself as both the Son of Man promised in Daniel 7:13 and the ladder between heaven and earth dreamed of by Jacob in Genesis 28:12.” (Op. cit.) Although Philip’s testimony falls short of understanding more fully who Jesus is, somehow it is enough to prompt Nathanael to respond to Philip’s invitation to “come and see.” (John 1:46)

In doing so Nathanael, like Philip, responds to Jesus not because of any great signs or miracles he may have performed but because of Jesus’ sheer presence. “The fact of Jesus’ humble and human origins initially causes Nathanael to scoff at Philip’s invitation . . .” (Ibid., page 262) “Can anything good come out of Nazareth?” (John 1:46) But upon meeting Jesus, Nathanael hails him as rabbi, the Son of God and the King of Israel.

The immediacy of his turn-around is striking. His confession of faith indicates “that these titles evocative of divine power apply to the human being from Nazareth. The overwhelming shock is that this person whose earthly origins can be identified, this Jesus, elicits a response appropriate to God.” (Op. cit.)

But what is it about Jesus that caused Nathanael’s turn-around – from cynicism to hope. Our reading provides us provides some enigmatic clues. When Jesus saw Nathanael coming toward him he said of him, “Here is truly an Israelite in whom there is no deceit?” (John 1:47) It is said in such a way that Nathanael wonders how it was that Jesus could say such a thing.

Jesus answered, “I saw you under the fig tree before Philip called you.” (John 1:48) It is then that Nathanael proclaimed, “You are the Son of God! You are the King of Israel!” (John 1:49)

As a consequence of his faith, Nathanael becomes aware that it is not enough to believe in Jesus. To be his disciple is follow him – sometimes all the way to the cross (John 21:18-22). Among the early disciples, it may be said that Nathanael’s relationship with Jesus moves from unbelief to belief, from cynicism to hope.

It is the invitation to “Come and see” that transforms Nathanael’s life. Jesus does not make any judgments about him but instead welcomes Nathanael’s cynicism as a measure of his honesty.

We began the season of Epiphany a few weeks ago affirming Jesus as the Son of God and then celebrating the gift of the presence and power of the Spirit in our world and in our lives. Today, we gather as the people of God, as the body of Christ.

In our reading from The First Letter of Paul to the Corinthians, Paul reminds us that our bodies are members of the body of Christ. It is within each of us that the Holy Spirit dwells. While it may titillate some to view Paul’s preoccupation with sex, his words were directed to those in Corinth who understood him well.

As the people of God, we must ask of ourselves – How do we follow Jesus? What have we said about who he is in our lives? When, like Philip, have we asked those, like Nathanael, to “Come and see”? I began this message to you this morning by referring to the acronym – BFF. In some ways I would say it is applicable to our relationship with Jesus but in a much deeper way. 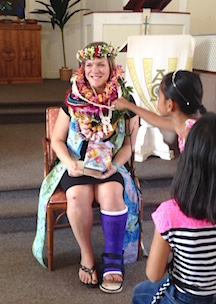 I had an opportunity yesterday to take the ferry to Lānaʻi along with around 50 other delegates from our partner churches here on Maui for the installation of the Rev. Sarah Rentzel Jones as the pastor of Lānaʻi Union Church. We were there to celebrate her call and her move with her husband and their children from Pennsylvania to Hawaiʻi.

Dorothy Lester, a former Associate Conference Minister for the Hawaiʻi Conference of the United Church of Christ, was invited to share the charge to Kahu Rentzel Jones and the congregation. In offering her words of encouragement, Dorothy drew upon a reading from The Gospel According to John that I would like to share with you that touches upon the deeper relationship we share with Jesus.

We are called by Jesus to a life of service and more.

Jesus said to the early disciples, including Philip and Nathanael, and he says to us today: “This is my commandment that you love one another as I have loved you. No one has greater love than this, to lay down one’s life for one’s friends. You are my friends if you do what I command you. I do not call you servants any longer . . . but I have called you friends, because I have made known to you everything that I have heard from my Father (sic). You did not choose me but I chose you. And I appointed you to go and bear fruit, fruit that will last, so that the Father will give you whatever you ask him in my name. I am giving you these commands so that you may love one another.” (John 15:12-17)