I was on my way to Makawao late in the week. I found myself driving behind a Bud Light delivery truck along Piʻilani Highway.

Below and to the left of the Bud Light logo was a sign which read: “Responsibility Matters” and below that a web site at: www.beeresponsible.com. It was an interesting play on words, especially if one made the effort to pronounce the two words – “beer” and “responsible” – together.

The only way one would be able to hear both words distinctly would be to slur them together. While that may sound amusing to some, it would seem to defeat the purpose of Budweiser’s desire to be perceived as a responsible corporation calling on its clients who drink to be responsible. 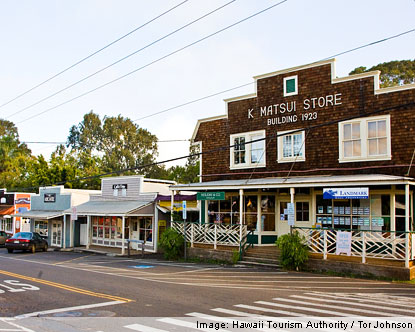 I was on my way to Makawao to bless the fourth branch of an international real estate company. I blessed other branches at a previous location in Makawao as well as in locations in Wailea and Kula. I wondered what I might say that would mark this particular occasion in a similar yet different way.

It was then that I realized the Bud Light delivery truck was a sign.

I knew several of the guests and employees of the company having met all of them on other occasions. We greeted each other with warm hugs and the familiar refrain that comes from island relationships: “It is good to see you again. It has been a long time.”

I noticed a glass encased box on the outside wall of the building that featured about a dozen properties available for purchase. One was listed at $11,000,000.

I thought about how my morning began with a telephone call from a social worker in Wailuku. “Mahalo for calling back,” I said.

“I wanted you to know that our Outreach Committee approved a grant for $200 for your client to purchase a twin bed from the Salvation Army store. A couple of the committee members will also donate a blanket and sheets,” I added.

“We may be able to pick up more sheets at the Salvation Army,” she said explaining that the grant would probably cover the additional cost.

I shared that story with those who were at the blessing pointing out that the bed was for a mother suffering from depression while caring for an adult child who was mentally disabled. They live in a dilapidated shack with no running water or electricity. Despite the circumstances surrounding their lives, there is a bond between mother and son that was paʻa or firm.

It is that bond between mother and child that is affirmed and recognized whenever a building is blessed. Our kūpuna or Hawaiian ancestors built their structures out of pili grass. When the structures were ready to be occupied they would gather the people together to cut and trim the grass. They would offer a blessing by saying - “Ka ʻoki ana i ka piko o ka hale. The cutting of the navel string to the house” - because they equated the completion of a building with the birth of a child. Both were seen as the creation of something new. There is no pili grass in almost all of the structures we build today, but the words of blessing are still offered in the same way.

A lei maile is always drawn across the entrance to a building. Unlike the pili grass which is cut and trimmed, the lei maile is simply untied with the understanding that it is a symbol of the umbilical cord between mother and child.

In one sense, the disparity between an $11,000,000 house and a dilapidated shack is evident in terms of monetary value. What are we to make of such a disparity and the many other disparities we see in our world?

The Bud Light delivery truck was a sign. It occurred to me as I offered the blessing that responsibility matters. In an industry based on the buying and selling of property and the enormous profits such sales can generate, giving back so that others may live fruitful lives is a responsibility we all share.

So what if anything does this all have to do with Jesus and a wedding feast in Cana of Galilee long, long ago? Well, at first glance not a whole lot.

However, in both instances there are signs – in one instance the ordinary and irreverent sign of a delivery truck and in the other the signs of extraordinary miracles and that is what is important in our reading from The Gospel According to John. The story of the wedding at Cana is often viewed as a miracle exposing Jesus’ supernatural power of turning water into wine all within the context of a wedding feast.

The significance of the story is that the wedding feast is the site of Jesus’ first miracle and more importantly the first of many signs found in The Gospel According to John. Chapter 2 begins in the village of Cana where he turns the water into wine. Between chapter 2 and chapter 4, he explains that his body is the new temple (John 2:13-25); he challenges Nicodemus to be born from above (John 3:1-21); and he offers living water to an unnamed woman at a well (John 4:1-45). He then returns to Cana to give life to the son of a royal official (John 4:46-54).

The story, in part, is a story about the interaction between a mother (Mary) and her adult child (Jesus). Mary and Jesus as well as the disciples are present at the feast when the wine begins to run out.

Mary feels responsible. She turns to Jesus for help. Jesus is clearly reluctant to respond but he obeys his mother and turns the water into wine.

The writer of John is clear about why Jesus responded. “Jesus did this, the first of his signs, in Cana of Galilee, and revealed his glory; and his disciples believed in him” (John 2:11).

The story of the wedding feast provides us not only with a sign of who Jesus is but with an extravagant sign of God’s abundance. It is a sign that we sometimes find difficult to recognize.

The Rev. Dr. Carol Hess wrote: “It may seem like a travesty to turn a narrative about divine abundance into a trial of God, and yet it is passages like this one about divine extravagance that make God’s absence in the face of poverty, suffering and evil stand out. How do we reconcile a story of potent generosity with a world in tremendous need? If God is both generous and able, then apparently God continues to express Jesus’ (own) attitude: what is that to me? (But) because we trust that God wants abundance, we follow in the footsteps of (his) mother . . . prodding God for divine compassion and generosity.” (Feasting on the Word, Year C, Volume 1, Bartlett & Taylor, Westminster/John Knox Press, Louisville, Kentucky, 2009, page 362)

The purpose of Jesus’ miracles or signs was to reveal who he was. The result was that some who saw the signs understood them and believed and some did not.

Although we were not witnesses to the signs themselves, we know the stories. The writer of John reminds us all: “Now Jesus did many other signs in the presence of his disciples, which are not recorded in this book. But these are written so that you may come to believe that Jesus is the Messiah, the Son of God, and that through believing you may have life in his name” (John 20:30-31).

There were no iPods or iPads; no Skype or email; no Facebook, Google or Yahoo back then. Only the stories that were told of the signs of the One whose name is Emmanuel - God with us- the One who is the Messiah; the One whom we call Lord and Savior; the One in whom we have life in times of abundance and in times of need.