In 1865 the Kingdom of Hawai‘i passed “An Act to Prevent the Spread of Leprosy” which required the arrest of “any person alleged to be a leper” and authorized the Board of Health “to send to a place of isolation all such patients as shall be considered incurable or capable of spreading the disease.” (“Songs of Kalaupapa”, Derek Ferrar, Hana Hou! The Magazine of Hawaiian Airlines, August/September 2012, Volume 15, Number 4, page 78) The disease became known to the Hawaiians not as leprosy but as ma‘i ho‘oka‘awale or “the separating sickness” – a phrase descriptive not of disease itself but of the actions taken by the fears of others.

Ironically, leprosy or what we now know as Hansen’s disease was one of the least contagious of all infectious diseases and that only about 5 percent of the human population is susceptible to it. (Op. cit.) But that was not known over 150 years ago. 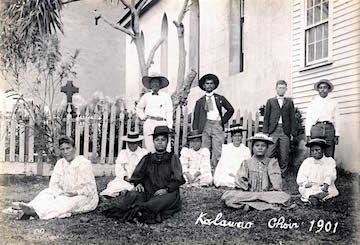 On January 6, 1866 the first group of 12 patients were sent to Kalawao on the eastern end of the Makanalua Peninsula on the island of Moloka‘i. They were left without access to shelter, food or water. Many others who were sent that first year quickly perished in the harsh conditions.

Yet some of the patients managed to survive. Among the nine men and three women who were sent to Kalawao in the first group, were two men named Kahauliko and Lono and one woman named Nahuina. Within a year, they were joined by 32 other patients representing 15 of our congregational churches to become the founding members of what became known as Siloama Church – “The Church of the Healing Spring.” (Adjourned with A Prayer: The Minutes of Siloama & Kanaana Hou Churches, Judd, Silva & Law, Ka ‘Ohana O Kalaupapa, Kalaupapa, Hawai‘i, 2011, page 7)

By action of the Annual Meeting of Congregational Churches in Honolulu in June of 1866, the 35 patients were released from their former congregations to become members of the first church to be established on the peninsula; a church that was initially established not as a building but as a community gathered to worship God.

Helen Keao, a patient, remembers: “When I came here, you can just imagine – I being a patient can just imagine how they must have felt – being taken away, cut off, from their family and their home, friends and their church. What else did they have left, except that one refuge, God?” (Op. cit.)

Taka Harada is a member of our church. Many of us know that his brother Paul was sent to Kalaupapa as a patient when he was a child. It was Paul who said, “When we didn’t have any hope of going back to see our family again, one of the things I noticed in Kalaupapa was that the sustaining force, you might say, was religion.” (“Songs of Kalaupapa”, Derek Ferrar, Hana Hou! The Magazine of Hawaiian Airlines, August/September 2012, Volume 15, Number 4, page 57)

It should not surprise any of us that Siloama Church would come to be known as “the church of the healing spring.” Having come from our congregational churches, we can surmise that those who established the church at Kalawao were well aware of the story which comes to us in our reading from The Gospel According to Matthew.

As Jesus walked by the sea, he called Peter and Andrew as well as James and John to follow him - to be his disciples as he set about to teach and proclaim the good news of the kingdom of God and to cure every disease and sickness. (Matthew 4:23) The invitation was clear “come and follow” me.

Sarah Benjamin, another patient, recalls that as they gathered to lay the foundation for a church building, “they had their prayers and their prayers were for their needs. They had hardly any house those days and then a few grass huts around the place. So they entered into prayer with God that someday, somehow, they would have a church.” (Op. cit.)

It would take another five years before they were able to raise the money needed for the construction of the church. The building was completed in July 1871 and it was formally consecrated in October of that year.

Over the course of the years that followed, the settlement was relocated from Kalawao to Kaluapapa. It was then that a second church was built – Kanaana Hou Church or “New Canaan.”

In the years that followed, both churches actively sought to improve the conditions for all of the patients. One might be inclined to believe that the members of the churches were self-serving.

But Rachel Souza looked upon “the separating sickness” in this way: “To my mind, God did not separate us. He put us together, and then we learned from one another. We tried to help one another.” (Adjourned with A Prayer: The Minutes of Siloama & Kanaana Hou Churches, Judd, Silva & Law, Ka ‘Ohana O Kalaupapa, Kalaupapa, Hawai‘i, 2011, Preface)

Edwin Lelepali also recalls: “John Kaona taught me how to play the guitar. He was a good instructor. So we started playing music and we started forming our group, the Kikinias. John was a policeman and he was always taking us down to the beach to go spear fishing. He’s a good fisherman, too. He taught us a lot.”

A day will soon come when there will no longer be any resident patients living in Kalaupapa. We have much to learn from about being compassionate and just from the witness of their own lives.

When the AIDS epidemic struck in the early 1980s and when there was talk of isolating patients in much the same way that the patients of Kalaupapa were isolated, it was their voices that said, “No.” More than anything they taught us that it was important to “isolate the fear” not the person.

Over the last two and a half decades, Kanaana Hou Church became one of three congregational churches in Hawaiʻi to publicly declared its welcome of members of the LGBT community. I remember my conversation with their kahu one. When I asked that why it was that they were so open to welcoming others who were different, he explained that they understood what it was like to be placed on the margins of society.

Herbert Hayase was sent to Kalaupapa in 1938. “They told me that clinically I was negative so I was so called ‘paroled.’ Then I went outside. I can tell you how cruel some people can be.”

“I heard a Japanese shopkeeper telling people that my nose and my ears were all gone. So, deliberately when I went back to Hana, I passed right in front of the store, showing myself. Nothing was wrong with me.”

“So, you see, persons like that who have no conscience make it hard for us to go outside (of Kalaupapa) and live.” And in thinking about the shopkeeper, he added, “There are a few that are not civilized yet.” (Ili Nā Ho‘omana‘o o Kalaupapa: Casting Remembrances of Kalaupapa, Law & Monson, Pacific Historic Parks, 2012, page 67)

Slack-key guitarist Stephen Inglis is a songwriter and composer. In 2012 he released a CD in collaboration with the late Dennis Kamakahi.

“Nā Pua O Kalaupapa” (“The Flowers of Kalaupapa”) is a tribute to the more than 8,000 men, women and children who were sent into exile to face an uncertain future. While some worry that the stories of Kalaupapa may fade away and eventually disappear with the passing of the remaining patients, Inglis offers words of reassurance: Mai nā Pali uluwehi i ka ‘ehu o ke kai, kō ‘oukou mau leo e mau ai - he makana iā kākou, he mau pua mae ‘ole. From the lush, verdant cliffs to the misty sea spray, your voices will forever live – these never-fading flowers are a gift to us all.”

We hear in their voices the voice of Jesus calling all of us to a life of service. “Come and follow me. Come and teach. Come and proclaim the good news of the kingdom. Come and cure every disease and every sickness among the people.”