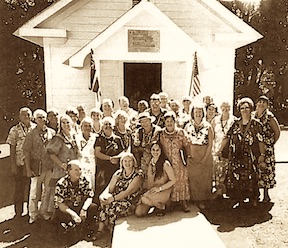 In early November 2002 members of our choir traveled to the Makanalua Peninsula on the island of Molokaʻi to celebrate the 135th anniversary of Siloama Church in Kalawao. For many in our group it was their first visit to what has become more commonly known as Kalaupapa.

Leprosy or what we now know as Hansen’s disease first appeared in the Hawaiʻi around the 1830s. In 1865, Kamehameha V signed an “Act to Prevent the Spread of Leprosy.” A decision was made to establish a hospital in Honolulu for the treatment of mild cases and a settlement for advanced cases on Moloka‘i.

The peninsula had three ahupuaʻa or land divisions - Kalawao, Makanalua and Kalaupapa. The land divisions were surrounded by the open ocean on one side and two-thousand-foot cliffs on the other.

Kalaupapa on the west end was still a fishing village with residents when the first patients were sent to the peninsula. So Kalawao at the east end was selected as the site for the first settlement (“Kalaupapa: A Portrait”, Photographs by Wayne Levin, Text by Anwei Skinsnes Law, Bishop Museum Special Publication, Number 91). Makanalua was located in the middle.

To say that Kalawao was barren and windswept would be an understatement. On January 6, 1866 the first group of patients including nine men and three women arrived. Of the twelve who arrived on that day, two men and a woman – Kahauliko, Lono and Nahuina – would go on to become founding members of the first church to be established in the settlement. Thirty-two other patients would join them to lay the foundation for Siloama Church or “The Church of the Healing Spring.”

In 1952, a plaque was placed inside the church listing the names of those founding members. I have always been struck by the inscription of the proclamation of faith that appears below their names: “Thrust out by mankind (sic), these 12 women and 23 men, crying aloud to God, their only refuge, formed a church, the first in the desolation that was Kalawao.”

Over time more and more of the patients settled in Kalaupapa. A branch of Siloama Church was built and became known as Kana‘ana Hou Church or New Canaan Church. It is remarkable to me that amid the lack of food and medical care and inadequate housing and amid the fear and ignorance of many, the new church would bear the name Canaan – “a land of promise.” I imagine for the patients the Hebrew name came to mean more than a geographic reference to ancient Palestine.

Sarah Benjamin, a member of Kana‘ana Hou, remarked in 1984 of Siloama: “...that first church [at Kalawao] was facing the road. Due to a heavy storm, kona storm that they had during those years, the patients and members of the church turned the building to how it is now, facing the other way. Because the wind that comes from the valley was very strong and there were no trees or anything to block the wind so it’s more of a barren land. That is why they turned it around to where it is now” (“Adjourned With a Prayer: The Minutes of Siloama & Kana‘ana Hou Churches”, Ka ‘Ohana O Kalaupapa, Kalaupapa, Moloka‘i, 2011, page 11)

In naming the church Siloama, it is not surprising that those who gathered on the lanai of the home of Kapuhaula, one of the founding members, would recall the story that comes to us from our reading from The Gospel According to John (John 9:1-2). We remember that as Jesus walked along one day, he saw a man born blind from birth.

His disciples asked him, “Rabbi, who sinned, this man or his parents, that he was born blind?” (John 9:2)

Jesus replied, “Neither this man nor his parents, he was born blind so that God’s works might be revealed in him” (John 9:3). There are echoes of Jesus’ reply in the words of Rachel Kamaka Souza, a patient who was sent to Kalaupapa in 1931. Rachel said: “To my mind, God did not separate us. [He] put us together, and then we learned from one another. We tried to help one another” (“Adjourned With a Prayer: The Minutes of Siloama & Kana‘ana Hou Churches”, Ka ‘Ohana O Kalaupapa, Kalaupapa, Moloka‘i, 2011). God’s work, then, was revealed through the ways in which Rachel and others learned to care for one another.

After Jesus replied to the question of the disciples, he spat on the ground and made mud with his saliva and spread the mud on the man’s eyes, saying to him, “Go, wash in the pool of Siloam – which means ‘Sent’” (John 9:6).

The blind man was “sent” to Siloam and there he washed mud from his eyes and returned seeing. One would have thought that his neighbors and those who had seen him before would have cause to rejoice. But they only knew him as a blind beggar. They did not even know his name.

It is very likely that Henry Nalaielua understood the lack of understanding of the blind man’s neighbors and others as he reflected on his own life. Sent to Kalaupapa in 1941, he said, “It’s a great feeling to know that you can come into . . . places where you were never allowed before. I don’t ask the reason, I just like the change. I think if there’s any reason for things opening up, it’s because now we have people who have become understanding. They don’t have the fear that people once had about ‘leprosy’ and they accept you for what to you are, not what you have” (“Kalaupapa: A Portrait”, Photographs by Wayne Levin, Text by Anwei Skinsnes Law, Bishop Museum Special Publication, Number 91).

When our choir visited Siloama Church in Kalawao in fourteen years ago, we had an opportunity to also visit St. Philomena Church that is often referred to as “Father Damien’s Church.” We know Father Damien as Saint Damien today.

After St. Philomena Church was blessed in 1872, Saint Damien would later expand the church to include a new nave and a steeple. As we walked into the sanctuary and sat down for a moment during our visit, our host pointed to puka or holes in the floor adjacent to the pews. “The puka were for the patients who had to spit from time to time,” he explained.

I thought about the contrast between the saliva that Jesus used to mix with the dirt to make the mud he applied to the blind man’s eyes and wondered if the patients felt an aversion to the story as they heard about what he had done. In the decades leading up to discovery of sulfone drugs in 1946 that led to a cure for Hansen’s disease, thousands died. Funerals were held almost every day. For many, the story of healing of the blind man may have seemed like a cruel joke.

The blind man was “sent” to Siloam to be healed. The patients who were “sent” to Kalawao and Kalaupapa in the early years prior to 1946 were “sent” without any hope of healing.

A patient described that reality. “They told me right out that I would die here, that I would never see my family again. I heard them say this phrase, something I will never forget. They said, ‘This is your last place. This is where you are going to stay and die.’ That’s what they told me. I was a 13-year-old kid” (“Songs of Kalaupapa”, Hana Hou – The Magazine of Hawaiian Airlines, Derek Ferrar & Elyse Butler, Volume 15, Number 4, August/September 2012).

Helen Keao was sent to Kalaupapa in 1942. Despite the despair of the early years, she said, “ . . . when the first group of patients came to Kalawao, some of them were Protestants and some of them, in fact, were very close to their churches on the outside. When they came here, you can just imagine – I being a patient can just imagine how they must have felt – being taken away, cut off, from their family and their home, friends and their church. What else did they have left except that one refuge, God?” (“Adjourned With a Prayer: The Minutes of Siloama & Kana‘ana Hou Churches”, Ka ‘Ohana O Kalaupapa, Kalaupapa, Moloka‘i, 2011, page 7)

Today we remember Kahauliko, Loe, Liilii, Puha, Kini, Lono, Waipio, Kainaina, Ka‘aumoana, Nahuina, Lakapu and Kipehe. We also remember other family members, neighbors and friends. We remember their faith and faithfulness in the midst of their struggle to survive.

For at least one member of the choir, our visit to Kalaupapa in 2002 was an opportunity to continue a personal odyssey that began in 1963. Taka Harada was invited by his brother Paul, a patient, to visit Kalaupapa.

On our visit as members of our choir, we had an opportunity to meet Paul and his wife Winnie as well as other patients. Paul is no longer with us. He died in 2008.

In his death and the death of more than 8,000 others, we are reminded of “the pain of losing one’s identity to a disease, the struggle to regain dignity and self-worth that has been crushed by years of isolation and institutionalization, and the suffering that society, in fear and ignorance, has placed on a few of its members” (From the jacket of “Kalaupapa: A Portrait”, Photographs by Wayne Levin, Text by Anwei Skinsnes Law, Bishop Museum Special Publication, Number 91).

The late Bernard Punikai‘a was sent to Kalaupapa as a young boy. Later he was able to leave Kalaupapa move into Hale Mohalu, a group home for patients, located in Pearl City on the island of O‘ahu.

In 1983 the State of Hawaiʻi made a decision to forcibly evict patients from what had become their home citing condition of the facility. Bernard and other patients resisted.

In thinking about the years he had spent at Kalaupapa, Punikaiʻa said, “Kalaupapa used to be a Devil’s island, a gateway to hell, worse than a prison. Today it is a gateway to heaven. There is spirituality in the place. All the sufferings of those whose blood has touched the land – the effect is so powerful even rain cannot wash it away” (“Songs of Kalaupapa,” Derek Ferrar, Hana Hou: The Magazine of Hawaiian Airlines, Volume 15, Number 4, August/September 2012, page 78).

Today, very few patients remain. What will become of Kalaupapa after they are gone is a concern shared by many including lineal descendants of those who died on the peninsula.

One thing is clear to me, we must do all we can to make certain that the voices of Sarah, Rachel, Helen, Henry and Bernard live on. In his composition “Nā Pua O Kalaupapa: The Flowers of Kalaupapa”, slack key guitarist Stephen Inglis conveys to us in poetry and music, what Bernard said.

“In this period of change and transition, the lifestyle of the old is slipping away. The sea showers have passed and have quenched the flowers of Kalaupapa. From the lush, verdant cliffs to the misty sea spray your voices will forever live, these never-fading flowers are a gift to us all.”

Mahalo ke Akua. Thanks be to God.