Dennis Kamakahi was a Hawaiian composer, recording artist and slack-key virtuoso. Three years ago, Kamakahi joined Stephen Inglis, a young prodigy whose parents were close with many patients at Kalaupapa, to release an album of songs related to Kalaupapa and Kalawao. It was at Kalawao and Kalaupapa on the Makanalua Peninsula on the north shore of Molokaʻi that who were those diagnosed with Hansen’s disease or leprosy were sent into exile beginning in 1866. (Hana Hou! The Magazine of Hawaiian Airlines, Volume 15, Number 4, August/September 2012).

In May 2012 Inglis and Kamakahi received the Nā Hōkū Hanohano Award for Slack Key Album of the Year. Included in the album is a song written by Inglis that pays tribute to the courageous people of the settlement whose future legacy seemed uncertain. “Nā Pua O Kalaupapa: The Flowers of Kalaupapa” is a poetic reference to the people of the settlement. 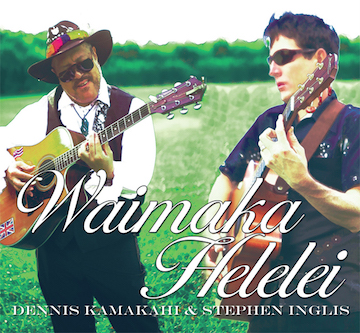 Kamakahi died on April 28, 2014 at the age of 61. As the last remaining patients themselves die, Inglis’ words remind us that it is important that the voices of the patients, like Kamakahi’s voice, live on.

Today is Kalaupapa Sunday. We join other congregations throughout Hawaiʻi in remembering “the flowers of Kalaupapa.” We also affirm the work of Ka ‘Ohana O Kalaupapa which focuses on the descendants of Kalawao and Kalaupapa.

Valerie Monson, the Coordinator for the ‘Ohana recalls that it was Bernard Punikaiʻa who began talking about bringing family members and friends together over twenty years ago “to make sure the voices of Kalaupapa would always be heard.” Through the publication of its newsletter and books, annual island gatherings, the restoration of family ties, and plans for a memorial that will list the names of those who died on the peninsula, the ‘Ohana is committed to “E hoʻohanohano a E Hoʻomau: To Honor and To Perpetuate” the stories of the 8,000 the children, women and men who were sent to Kalawao and later to Kalaupapa.

Their voices matter. It was on October 28, 1871, five years after the first patients were sent to the peninsula that Siloama Congregational Church or “The Church of the Healing Spring” was consecrated. It was through the voices of the twelve women and twenty-three men “crying aloud to God” that the church was formed.

Long ago a story was told of a Syrian commander of the great army of Aram who suffered from leprosy. His name was Naaman. He cried out too.

Biblical scholars point out that the Hebrew term sarath that is used to describe Naaman’s illness referred to a broad range of skin and fungus infections but not Hansen’s disease (Preaching Through the Christian Year B, Craddock, Hayes, Holladay & Tucker, Trinity International Press, Harrisburg, Pennsylvania, 1993, page 100). Biblical scholars also point out that archaeological excavations indicate that Hansen’s disease apparently did not exist in ancient Palestine or ancient Syria when the story of Naaman was recorded. So it was expected that Naaman would recover from his illness.

Hansen’s disease was called elephantiasis in ancient times. “In the Middle Ages, lepra, the Greek term used to translate sarath, also came to be used for elephantiasis, and this produced the confusion” (Op. cit.).

Whatever may be said about Naaman’s condition what is striking about the story are the many voices that are heard. We hear the voice of the young slave girl of Israel who serves her master by pointing him on the path to his healing.

For Naaman and for us, God’s providence comes through the voices of those whom we least expect. Their voices mattered. That is something that Naaman discovered in his own healing.

Our “Call to Worship” this morning included lyrics from a song composed in 1868 by Princess Liliʻuokalani in collaboration with her sister Princess Miriam Likelike and their close friend Kapoli. Princess Likelike was 17 years old and Kapoli was 16 years old when they composed the beautiful waltz, Ahe Lau Makani.

Years later in 1882, it is said that Kapoli remained at the bedside of the ailing Princess Ruth Keʻelikolani with Princess Ruth’s closest relative, Princess Pauahi Bishop. When Princess Ruth died, Kapoli was one of eight people named in her will.

In the years that followed Kapoli was identified by several different names. On January 22, 1888 Princess Liliʻuokalani wrote the following account in her diary: “Recvd (sic) letter from Kapoli telling me that she had been reported to the board of health & perhaps will be sent to Kalawao. Poor Lizzie – sat thinking of her all evening and writing music.” Four months later, she wrote: “Went to Kakaʻako to bid Kapoli good bye” (Ili Nā Hoʻomanaʻo o Kalaupapa: Casting Remembrances of Kalaupapa, Law, Monson & Levin, Pacific Historic Parks, 2012, Waipahu, Hawaii, 2012, page 2).

Kapoli was listed as #3298 when she boarded the Kilauea Hou along with twenty-eight others believed to have Hansen’s disease or leprosy. Her father accompanied her as a kōkua – as a helper. She arrived on the peninsula at the age of thirty-six. She died three years later (Op. cit.).

I sometimes wonder whether the lyrics of Ahe Lau Makani brought any comfort to Kapoli as she faced the waning days of her life:

There is a breath so gently breathing,
So soft, so sweet by sighing breezes,
That as it touches my whole being,
It brings warmth to my soul.

When Kapoli arrived at Kalaupapa, part of the history of Hawaiʻi and of Hawaiian music was lost. Valerie Monson writes: “The history of Kalaupapa, and of the estimated 8,000 individuals believed to have leprosy who were sent to this remote peninsula on the island of Molokaʻi, is filled with lives lost to family histories, lives lost to Hawaiʻi’s history. Fortunately, the people of Kalaupapa left a record of their thoughts, their lives and their insistence on justice in a situation that seemed so unjust” (Op.cit.).

Helen Freitas Keao was sent to Kalaupapa in 1942 at the age of fifteen. She said, “I do not believe that all of the people were bad because I feel that if that was true, then there would not be a church called Siloama, which was the first church built at Kalawao ... I, being a patient, can just imagine how they must have felt being taken away, cut off from their family and their home, friends and their church. What else did they have left, except the one refuge, God?” (Ibid., page 8).

Naaman, like Helen, found in God a refuge. In our own sorrow and despair, in our moments of joy and hope, in our own pain and suffering, and in our moments of comfort and healing, we join our voices with their voices in proclaiming that our refuge is also in the God who is the God of all.