I accepted Kahu Lon Rycraft’s invitation: “Come to Kalaupapa,” he said. “You will have a chance to rest.” Kahu served as the pastor of the Siloama Church in Kalawao and Kanaʻana Hou Church in Kalaupapa from 1993 to 2005. I knew very little about the history of the settlement where more than 8,000 men, women and children were sent when they were diagnosed with Hansen’s disease or leprosy.

I remember the day we drove to Kalawao. As we traveled along a graveled road across the peninsula, Lon pointed to areas where there were thousands of unmarked graves.

Lon suggested that we spend the first day at Siloama Church. He warned me that the ride would be a little bumpy. When we arrived at the church, I was struck by its simplicity. It looked like an old one-room school house. 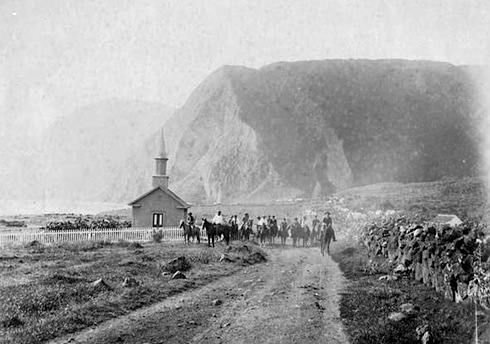 I noticed the plaque on the wall that listed the first 35 members of the church and below the words of dedication: “Thrust out by mankind (sic) these 12 women and 23 men crying aloud to God, their only refuge, formed a church, the first in the desolation that was Kalawao.”

Outside, it was a clear day. The sun was out. The sky was blue. The sea was calm. The trees stood tall and green. It hardly seemed like a desolate place and yet we know it was in that first winter of 1866.

The 35 men and women who were sent to Kalawao came from 15 of our Congregational churches – six on Oʻahu, one on Molokaʻi, four on Maui, and four from Hawaiʻi island. They met to lay the foundation for the church that was to be known as Siloama – The Church of the Healing Spring.

The name of the church was drawn from the story of the man born blind that comes to us from our reading from The Gospel According to John. The disciples questioned Jesus about the man’s blindness and attempted to find fault in the man or his parents.

Jesus’ action and command (John 9:6-7) that the man “Go, wash in the pool at Siloam” has its parallel in the prophet Elisha’s cleansing of the Naaman the Syrian who was afflicted with leprosy or Hansen’s disease. (2 Kings 5:10, Mark 8:23) It was Naaman who was told by the Elisha to go and wash in the Jordan River.

That the first church on the Makanalua Peninsula should be called Siloama which also means “sent” is significant to me. Those who were “sent” have left us a record of their thoughts, their lives and their insistence on justice for those who were deprived of their families, their homes and their basic rights as human beings. Although almost all have died, the voices of those gone and still living echo across the peninsula and it is their voices that we hear.

Helen Keao was sent to Kalaupapa in 1942. She said, “I have read and I have heard many stories about Kalaupapa and of the people that lived at Kalawao ... that the people who lived here were bad, that the land was without law and the people were lawless, immoral and they were engaging in a lot of wickedness. But, I don’t think so, in fact I don’t believe that all the people were bad because I feel if that was true, then there would not be a church called Siloama, which was the first church to be built here at Kalawao.” (Adjourned With a Prayer: The Minutes of Siloama & Kanaʻana Hou Churches, Judd, Silva, & Law, Ka ‘Ohana O Kalaupapa, 2011)

Such stories about lawlessness, immorality and wickedness in the early years is what may have fueled the leadership of the Hawaiʻi Evangelical Association at its annual meeting in 1873 to insist it was their duty to help the public realize that the segregation of those afflicted with leprosy was the “only salvation for the Hawaiian people.” It was at that meeting that the delegates from Congregational churches throughout Hawaiʻi concluded that without such action, the work of the mission would mean the “shame, defeat and disgraceful overthrow to all that is promising and fair in the nation.”

Over time, it would be that attitude of shame and disgrace, fueled by fear, that created the stigma and prejudice experienced by so many who were exiled to the peninsula. It would not be the first time that the church, as an institution bound by dogma and doctrine, would fail in its calling to care for the least among the people.

In 1869, William Uwēleʻaleʻa had sent a letter to the Hawaiian language newspaper Ka Nūpepa Kūʻokoʻa four years earlier on behalf of the congregation of Siloama Church. He wrote: “You must not think that all of us here are living in sin and degradation. That is not so. Our greatest longing is to make a memorial to God here. Perhaps this can be likened unto the bathing pool of Siloam in our Lord’s time. Therefore we are minded to put up this church and to call it by the name of Siloamʼs healing pool ... ” (Op. cit., page 10)

In the years after the church was established, thousands would be “sent” to Kalawao and later to Kalaupapa. For those fearful of the disease, segregation and separation was essential.

Jesus said, “Just as I have loved you, you also should love one another. By this everyone will know that you are my disciples, if you have love for one another.” (John 13:34-35) So it was that Helen Keao, William Uwēleʻaleʻa, Rachel Kamaka Souza, Samuel Kauwalu, John Cambra and so many others took care of each other.

Yet as a consequence of their persistence, they became a gift to each other and to those of us who would come after them and for that we give thanks to God. Amen.