February is Black History Month across the U.S. As the month begins, it is important for us to take some time to acknowledge the contributions of African Americans to our national life.

There are two women who come to mind for me this morning. The first is Sojourner Truth; the second is Jo Ann Gibson Robinson. 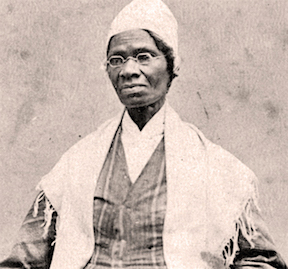 Sojourner Truth was born into slavery in Ulster County, New York in 1797. Known as Isabella, her parents were James and Betsey, the property of Colonel Johannes Haddenberg. As a child she spoke only in what was referred to as low Dutch, and like most slaves she never learned to read or write.

When she was ten years old, she was sold for $100 and some sheep. Over the course of her lifetime she would be sold four more times, until she was freed in 1827 by the New York Gradual Abolition Act. She married Thomas, a fellow slave, in 1815 and bore five children (“Sojourner Truth: A Life and Legacy of Faith,” Mary G. Butler, Sojourner Truth Institute of Battle Creek & Historical Society of Battle Creek).

Over the course of her lifetime, she became a devout Christian and became known as a preacher and a forceful and passionate advocate for the abolition of slavery and women’s suffrage. In 1843, she took the name Sojourner Truth. It is said that “she called herself Sojourner, claiming to have heard this name whispered to her from the Lord. She added the appellation of Truth to signify that she should preach nothing but truth to all men (sic)” (www.sojournertruth.com).

Her most famous address, known as “Ain’t I A Woman,” was made at a Women’s Rights Convention in Akron, Ohio on May 28, 1851. Sojourner asserted that women deserved equal rights with men because they were equal in capability.

The phrase “Ain’t I A Woman” became the refrain to her short address. Several male ministers were in attendance on the second day of the convention. They argued that women should not have the same rights as men reasoning that “women were weak and men were intellectually superior and that Jesus was a man.” Aware of their presence Truth began: “That man over there says that women need to be helped into carriages, and lifted over ditches, and to have the best place everywhere. Nobody ever helps me into carriages, or over mud-puddles or gives me any best place! And ain’t I a woman?”

“Look at me! Look at my arm! I have ploughed and planted and gathered into barns, and no man can head me. Ain’t I a woman?”

“I have borne thirteen children and seen most all sold off to slavery, and when I cried out with my mother’s grief, none but Jesus heard me! And ain’t I a woman?”

Sojourner Truth died around the age of 85. A century and a half after her death, a young African American woman’s life fell within her shadow. I was all of six months old when Jo Ann Gibson Robinson boarded a bus in Montgomery, Alabama in December 1949 for a trip to the airport and a flight Ohio for the holidays. She had just become a member of the English faculty at Alabama State College in Montgomery in September of that year and would go on to play a pivotal role in the American Civil Rights Movement.

She recalled an episode that day that changed her life. She said, “I boarded an almost empty city bus, dropped my coins into the proper place, and observed the passengers on board, only two – a white woman who sat in the third row from the front, and a black man in a seat near the back. I took the fifth row seat from the front and sat down, immediately closing my eyes and envisioning in my mind’s eye, the wonderful two weeks’ vacation I would have with family and friends in Ohio.”

“From the far distance of my reverie I thought I heard a voice, an unpleasant voice, but I was too happy to worry about voices, or any noise for that matter. But the same words were repeated in a stronger, unsavory tone, and I opened my eyes. Immediately I sat up in that seat. The bus driver had stopped the bus, turned in his seat, and was speaking to me!”

“ʻIf you can sit in the fifth row from the front of the other buses in Montgomery, suppose you get off and ride in one of them!’ I heard him, but the message did not register with me. My thoughts were elsewhere.”

“I leaped to my feet, afraid he would hit me, and ran to the front door to get off the bus. I even stepped down to the lower level, so that when the door opened, I could step off the bus and hide myself, for tears were falling rapidly from my eyes. It suddenly occurred to me that I was supposed to go to the back door to get off, not the front! However, I was too upset, frightened and tearful to move.”

“I never could have walked to the rear door. Then the driver opened the front door, and I stumbled off the bus and started walking back to the college. Tears blinded my vision; waves of humiliation inundated me” (The Montgomery Bus Boycott and the Women Who Started It: The Memoir of Jo Ann Gibson Robinson, The University of Tennessee Press, Knoxville, Tennessee, 1987, pages 15-16).

It was that experience and the experience of many others in the black communities of Montgomery that motivated Robinson and other black professional women to organize the Women’s Political Council after they learned that the local League of Women Voters would not allow black women into the membership of the league.

On May 21, 1954 Robinson sent a letter to Mayor W.A. Gayle asking for “better seating arrangements” on the city’s buses. In the months that followed, complaints mounted from others in the black communities about how they were being treated on the busses.

In the late afternoon of Thursday, December 1, 1955 a woman name Rosa Parks was arrested for refusing to give up her seat for a white man. She was taken to jail and a trial was scheduled four days later on December 5th.

It was the day that after Parks was arrested that Robinson announced that the women would call for a bus boycott to take place on the day of the trial and the rest they say is history.

Unlike Sojourner Truth who was unschooled, Robinson graduated from high school, earned a B.S. degree from Georgia State College at Fort Valley. She received an M.A. in English at Atlanta University and accepted a teaching position at Mary Allen College in Crockett, Texas before moving to Montgomery.

Like Truth, Robinson understood that it was her kuleana or responsibility to proclaim good news to the poor, the captives, the hurting, and the oppressed. The power of that proclamation is what comes to us in our reading from The Gospel According to Luke.

After Jesus read from the scroll of the prophet Isaiah and announced that he was the fulfillment of scripture, all who were there were initially amazed at “the gracious words which came from his mouth” (Luke 4:22). But it quickly becomes apparent that beyond the proclamation of the good news, Jesus asserts that he is their long-awaited Messiah.

He challenges everyone around him to accept others whom they may have disregarded – the widow, the leper, the foreigner. Aware that the people want him to perform the miracles he did at Capernaum as a sign that he is the Messiah, Jesus tells them two stories from their own scriptures.

“When there was a famine in the land during the time of Elijah, the prophet was sent to a widow not in Israel but at Zarephath in Sidon, in order to deliver the good news of reconciliation. And when there were many lepers in Israel during the time of Elisha, only one leper was cleansed and healed of his affliction: Naaman, in Syria” (“Reflections on the Lectionary,” Verity A. Jones, Christian Theological Seminary, Indianapolis Indiana, Christian Century, January 20, 2016, page 19).

In both instances, God chose foreigners. Like Truth and Robinson – a slave and a professor - God chose the unlikeliest of folks in a poor widow from Sidon and a powerful military commander from Syria to challenge us to accept even those whom others would reject.

Today, the proclamation of the good news of God’s love and inclusion of the poor, oppressed and even the foreigner in the kingdom of God is especially critical. There are many across the U.S. who would count themselves among those who would drive folks – the strangers, the migrants - out of their towns. They may not hurl them off cliffs but there are those who are convinced that guns and bombs are the deterrence to our all our fears (Ibid).

The Rev. Verity Jones is the Executive Vice President at Christian Theological Seminary in Indianapolis, Indiana. In a reflection on our reading from The First Letter of Paul to the Corinthians she writes: “Love rejoices in truth, and sometimes the truth is infuriating – especially when it reveals suffering and loss, discrimination and inequality.” Such truth caused those who heard Jesus that day in the synagogue to become so enraged, they turned on him with deadly violence, a violence that Truth and Robinson came to know well in their own lives.

“Thanks be to God that love will outlast every injustice and oppression, every humiliation and regret, every impulse to violence and discrimination. Without love, we might just be a noisy gong or clanging cymbal” (Ibid.)