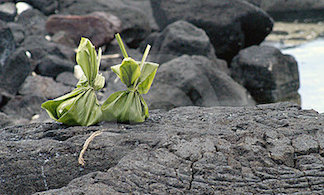 I was a child when I first saw a lava rock wrapped in a ti leaf and left on the platform of Hikiau Heiau at Kealakekua Bay on the island of Hawaiʻi. It is said that King Kalaniōpuʻu built Hikiau between 1500 and 1749 for sacrificial and religious ceremonies.

At the time, I thought it was an odd offering to leave at a temple and learned very quickly that visitors were being told that by doing so good fortune would come their way. It was not until years later that someone said that a proper hoʻokupu or offering for the god or gods of the temple was food wrapped in ti leaves - not a rock or a stone.

At first glance, it may seem that the reading from The First Letter of Paul to the Corinthians has very little relevance to us today. But I have always been fascinated by the apparent controversy that emerged among the Corinthians regarding “food sacrificed to idols” (1 Corinthians 8:1). We may be tempted to look upon the prohibition of eating food sacrificed to idols and the denunciation of the worship of other gods as the key to understanding Paul’s words to those in the early church in Corinth and therefore conclude that such condemnation be applied to the sacrifices made at Hikiau and other heiau or temples throughout ancient Hawaiʻi.

It turns out our reading is about much more than eating sacrificial food (Feasting on the Word, Year B, Volume 1, Bartlett & Taylor, Westminster/John Knox Press, Louisville, Kentucky, 2008, page 302). In some ways, Paul’s words may have exacerbated the struggle of our Hawaiian kupuna or ancestors to understand that the message of the good news of Jesus Christ was not about condemnation but about salvation (John 12:47).

The late Mary Kawena Pukui was a noted Hawaiian scholar and linguist. She reminds us that in 1819 a symbolic act changed the course of Hawaiian history when Kaʻahumanu, the high chiefess and widow of Kamehameha I, publicly ate with Liholiho, the child-king and successor to the throne left vacant by Kamehameha’s death. Pukui writes: “The act signified much more than the breaking of a food kapu. It dramatized the end of Hawaiʻi’s entire system of religion, of laws, of the entire social structure built on, and reinforced by, belief in the old gods.” (Nānā I Ke Kumu: Look to the Source, Volume II, Pukui, Haertig & Lee, Hui Hānai, Honolulu, Hawaii, 1972, page 297)

The ‘ai kapu became the ʻai noa. The ‘ai kapu or eating ban had been overturned. Now all were ‘ai noa – free to eat – women and men together.

The first Christian missionaries arrived from Boston in 1820, a year after the ‘ai kapu had been overturned. Pukui points out that the years that followed  “held painful conflict and confusion.” She adds, “The true God, said the missionaries, allowed no other gods ... (Ibid., page 231).”

Paul’s response to those in the church in Corinth seems to underscore the assertion made by the early missionaries to Hawaiʻi. But it is important for us to understand that Paul’s comments were being made to a church with “a strong faction of well-educated, well-to-do relatively sophisticated members who believe that Christians should be free to eat meat offered to idols (Feasting on the Word, Year B, Volume 1, page 302). Paul recognizes that everyone possesses knowledge and everyone knows that idols do not exist and therefore, have no power, since there is “no God but one” (1 Corinthians 8:4).

But for Paul, the struggle is not about whether one eats food sacrificed to idols. Ultimately, his concern is to see that the strength of the church is built up and that the strong become more sensitive to the common good of the whole rather than just for themselves. (Preaching Through the Christian Year B, Craddock, Hayes, Holladay & Tucker, Trinity Press International, Harrisburg, Pennsylvania, 1993, page 90).

Paul recognizes that the reasoning of those who insist that in Jesus Christ we are given a new freedom and are no longer constrained by any kapu or god. But Paul insists that such reasoning or knowledge falls short if it is uninformed by the knowledge of love (Seasons of the Spirit, SeasonsFUSION, Advent, Christmas, Epiphany, 2014-2015, Wood Lake Publishing, Inc. 2014, page 162).

Knowledge by itself puffs up. But knowledge with love is what builds up (1 Corinthians 8:1). The Rev. Dr. V. Bruce Rigdon, President Emeritus of the Ecumenical Seminary of Detroit, Michigan writes: “Paul wants his Corinthian friends and all of us,” including our Hawaiian ancestors, “to know that being certain of what is right or wrong, appropriate or inappropriate, is not sufficient ...” (Preaching Through the Christian Year B, page 306).

Paul’s account of what transpired among those who were in Corinth centuries ago raises questions about our own congregational life. The range of concerns and issues, in number and in scope, are many and varied.

How often is it that we find ourselves “taking sides” in the church insisting that our knowledge is sufficient; that we know better? As the Body of Christ here in Mākena and as the church in every corner of the world, we would do well to recognize that above all else we are called to show God’s reconciling love in the church and to recognize that such love will have a bearing on our proclamation of that good news to others.