I was in the first grade at Keauhou School in Kona on the island of Hawaiʻi in 1955 when a 42-year-old African American woman named Rosa Parks boarded a bus in Montgomery, Alabama to go home from her work as a seamstress at a department store. She found a seat near the middle of the bus, just behind the 10 seats reserved for whites.

The bus filled up quickly. When a white man entered the bus, the driver insisted that all four blacks sitting just behind the white section give up their seats so that the man could sit there. 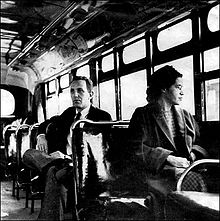 It had been a long day of work. She would later say that her refusal to comply with the driver’s demand wasn’t because she was physically tired from her work as a seamstress, but because she was tired of giving in.

The bus driver called the police. Parks was arrested and convicted of violating the laws of segregation.

It would not be until years later that I would come to understand the significance of her action that day. February is celebrated as Black History Month across the U.S. It is a time when we look back on the historical contributions of African Americans and their impact on our lives.

I thought about Rosa Parks this week when I received a letter in the mail with a postage stamp that featured a portrait of her. Her action that day in Montgomery was not something she had planned to do. It was unexpected.

Parks had managed turned things upside down through her quiet refusal to give up her seat. Her arrest occurred a few days before a group of leaders from the African American community gathered at Mt. Zion Church to discuss a boycott of Montgomery’s city buses.

In cities throughout the South, segregated bus companies were daily reminders of the inequities in American society. African Americans made up about 75 per cent of the riders in Montgomery. A boycott would have a significant effect on the city’s economy.

At that meeting at Mt. Zion Church, a young Baptist minister named Martin Luther King, Jr. was chosen as their leader. Sparked by the action of Parks, the boycott lasted 381 days. In December 1956 the U.S. Supreme Court ruled that the segregation law was unconstitutional and the Montgomery buses were integrated. An era of non-violent mass protests in support of civil rights in the United States had begun as a result of the decision made that day not to give up her seat.

That sense of the unexpected is reflected in our reading from The Gospel According to Matthew. When Jesus saw the crowds one day, he went up the mountain and after he sat down, his disciples came to him and he began to teach them.

As a consequence of his teaching we notice that the blessings that were offered that day on the mountain were “completely (the) reverse (of) the values of most societies, including our own.” (Preach Through the Christian Year A, Craddock, Hayes, Holladay & Tucker, Trinity Press International, Harrisburg, Pennsylvania, 1991, page 101) It has been said that “we have learned the ways of the world from our earliest days; that blessed are the rich, blessed are those with good healthcare and retirement plans, blessed are the powerful and popular, and blessed are the young and good-looking.” (Seasons of the Spirit, SeasonsFUSION –Advent/Christmas/Epiphany 2013-2014, Wood Lake Publishing Inc. 2013, p. 146.)

But the ways of the world are not the ways of the kingdom of heaven. This first teaching to the disciples turned the world view on its head. We know this as the Sermon on the Mount and that it is the first of five lessons is on a collection of sayings we call the Beatitudes. Jesus presents us with a view we do not expect.

The blessings are presented as simple facts. “God will bless the poor in spirit, those who mourn, the meek, those who hunger and thirst for righteousness, the merciful, the pure in heart, the peacemakers, and the persecuted.” (Op. cit., page 238) What is important about the Sermon on the Mount is the description Jesus provides about the nature of the kingdom of heaven and what it means for us to be a part of the kingdom. What is important is what we come to understand as the character of God.

When Rosa Parks left work on December 1, 1955 she boarded a bus in downtown Montgomery. Not long after she sat down, the bus driver noticed that all the seats in the “Whites Only” section were now taken. He ordered the four people in the row where Parks was seated to move to the back of the bus, where there were no open seats.

At first no one moved. But when the driver raised his voice a second time, they all get up except for Parks. The driver demanded, “Why don’t you stand up?” to which she replied, “I don’t think I should have to stand up.” It was not what the bus driver expected to hear.

When Jesus saw the crowds he went up the mountain and after he sat down, the disciples came to him. I imagine if it was 1955 and that mountain was in Montgomery and Rosa Parks was there, she would have found great comfort in Jesus’ words: “Blessed are those who are persecuted for righteousness’ sake, for theirs is the kingdom of heaven.” It was not what she would have expected to hear.