“The Glory of the Lord”

It was probably over forty years ago that I stood in the early morning sunlight on the narrow dirt road leading into Halawa Valley on the east end of the island of Molokaʻi. I was living in California at the time when I decided I would return to Hawaiʻi for a visit and in particular to Molokaʻi. 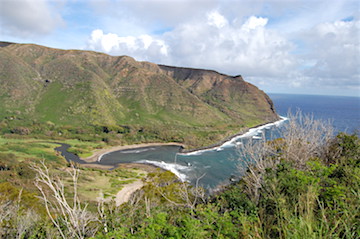 The day was clear. The sun was shining. I was with a couple of traveling companions. Two waterfalls were visible from the lookout above the valley – Moaʻula to the left and Hipuapua to the right. Our destination was the more easily accessible two-tiered Moaʻula Falls located around 1.7 miles from the start of the trail.

Much of the area was once extensively cultivated with taro. On the hike into the valley, old house lots were visible.

At least two devastating tsunami, one in 1946 and another in 1957 devastated the area and as a consequence many families moved out of the valley. The now abandoned house lots were a sign of that the valley was once a thriving community.

Halawa Congregational Church, established in 1852, was among the abandoned structures that were destroyed by the tidal wave in 1946. In the years that followed, Ka ‘Ekalesia O Ierusalema Hou or The Church of New Jerusalem was built further inland and to the right of the path leading up into the valley.

Wherever the lizard may reside did not matter to me as much as what was said next. If one wants to swim in the pool, one has to first drop a ti leaf on the surface of the water. If the ti leaf floats it is safe to swim. But if it sinks, the moʻo is not happy and it is not safe to enter the water.

The one I read years ago said you had to wrap the ti leaf around a rock and toss it into the pool and that is exactly what I did. I had surmised that by wrapping the ti leaf around a rock, the leaf was sure to float once the rock hit the surface of the water and pulled itself away from the leaf. I would then be able to enjoy washing off the sweat and heat of the hike.

But once the leaf and the rock hit the water, they both immediately disappeared from sight. I waited thinking that the leaf was sure to surface.

Well, it didn’t. The sign was clear to me and to my traveling companions. No pool time for me. I sat down on a rock and was left to enjoy the mist that was carried by the wind from the base of the waterfall.

Such a story may seem far-fetched to some. Others may even deem the story of a temperamental lizard anathema to the Christian faith. We are convinced that our own biblical stories of miracles are far from imaginary.

Jesus took to heart the importance of being able to tell stories. He told stories not so much to say that they were literally true but to say that the stories he told, the parables he told all taught a truth – which brings us to our reading from The Gospel According to Luke.

The story of Jesus’ transfiguration began as a prayer with Peter, John and James and grew into nothing short of an intense religious experience for Jesus and the disciples. The exact nature of the experience for Peter, John and James is uncertain. The Gospel According to Matthew uses the word vision to describe what the disciples saw (Matthew 17:9). Biblical scholars remind us that “the aura of unnatural brilliance” – of a radiant light – “is associated with mystical experiences elsewhere” in the Bible (The New Oxford Annotated Bible, Metzger & Murphy, New Revised Standard Version, New York, Oxford University Press, 1991, “The New Covenant Commonly Called the New Testament of Our Lord and Savior Jesus Christ,” page 95).

We find that experience in the transfiguration of Moses (Exodus 34:29-35) and we see it in the story of the conversion of Saul of Tarsus on the road to Damascus. As Saul was going along and approaching the city, “suddenly a light from heaven flashed around him” and he heard a voice (Acts 9:30-4) and it was on that journey that Saul of Tarsus became known as Paul the Apostle.

What becomes evident in all of the stories is that light is used as description of “the glory of God.” Many would love to have such an experience of blinding light and perhaps a booming voice as the sure and certain signs of “the glory of God.” For others like a young Hawaiian man named ʻŌpukahaʻia, the conversion of Paul on the road to Damascus may seem as far-fetched as those who insist that the story of the giant moʻo guarding the waters of Moaʻula Falls is far-fetched. I will say more about ʻŌpukahaʻia next Sunday as we commemorate and celebrate his life and the impact it had on the early Christian mission to Hawaiʻi that began in 1820.

For today, I simply want to call our attention to two moments in his life that speak to our understanding of “the glory of God” and God’s power and presence in the world and in our lives. Most written accounts of his life will be quick to claim that he was the first Hawaiian to convert to Christianity. Whether or not that is true, it is likely that we will never know for certain.

What we do know is when ʻŌpukahaʻia made the decision to become a Christian he wrote the following words paraphrasing what is written in The Book of First Kings (19:11-13): “The Lord was not in the wind, neither in the earthquake, nor in the fire, but in the still small voice.”

The story of ʻŌpukahaʻia’s decision to become a Christian may be not filled with the intensity of what happened to Moses or Jesus or Paul, but the light that was present for each of them, came to ʻŌpukahaʻia, at the beginning of his life and at the end of his life.

On Tuesday, February 17, 1818 he fell gravely ill with symptoms suggesting that he was stricken with typhus. As death approached for ʻŌpukahaʻia it is said that his physician asked him, “How do you feel?”

He answered, “Very well. I am not sick. I have no pain. I feel well.” Those who were in the room recalled: “The expression of his countenance was that of perfect peace.” When he finally breathed his last breath, someone said “ʻŌpukahaʻia’s gone.”

Immediately all who were in the room sprang to his beside. “The spirit,” someone wrote, “had departed, but a smile, such as none present had ever beheld, an expression of the final triumph of his soul, remained on his countenance” (The Providential Life & Heritage of Henry Obookiah, Christopher L. Cook, Paʻa Studios, Waimea, Kauai, Hawaii, 2015, page 103).

God in the wind, earthquake, and fire? Yes. God in the sheer silence? Yes. Not one or the other, but both.

On the hike out of Halawa Valley, we walked alongside the stream from Moaʻula Falls towards the ocean. I wondered if my decision not to swim in the pool was a betrayal of my Christian faith. What would others say – that I was gullible enough to base my decision not to enter the pool on a legend? That I had made a choice between being “Hawaiian” and being “Christian”?

As we approached Ierusalema Hou church now to our left, I told my companions that I wanted to go in to say a prayer. I wasn’t even sure about what I would pray or if the church door would be open. It was open and I made my way to one of the wooden pews and sat down.

I closed my eyes and remembered the rush of the wind and the spray of water as I sat on the rock at Moaʻula Falls. I remembered the blue sky and the light of what had become the midday sun. I remembered sitting still. Then I realized the glory of God was present in that place.

When I was pau, when I was done, I lifted my head. All the questions of doubt and betrayal dissipated like the Moaʻula mist carried away by the wind. Out of the corner of my eye I caught a glimpse of some movement on the wall to the right of a wooden cross. It was a moʻo.