James Thurber was an American writer and artist. He was born in 1894. He died in 1961. He became one of the most popular humorist of his time, celebrating “in stories and cartoons the comic frustrations of eccentric yet ordinary people” (Encyclopedia of World Biography, www.notablebiographies.com.

He became a cartoonist for the New Yorker magazine in 1931 and went on to publish numerous books. A number of his short stories were made in movies including the 1947 film, “The Secret Life of Walter Mitty.”

It was Thurber who wrote: “There are two kinds of light – the glow that illumines and the glare that obscures” (Lanterns & Lances, 1961, page 146) The scientists among us will point out that there is a much broader spectrum of light beyond a glow and a glare. There is light we cannot even see. They have special names but they are all forms of light: radio waves, microwaves, infrared, ultraviolet, x-rays and gamma rays. 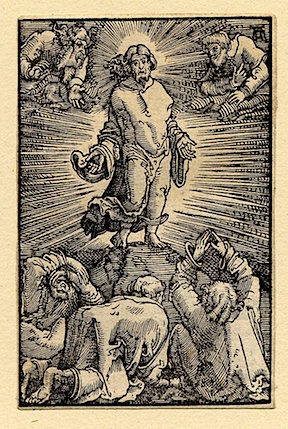 As a writer, Thurber was less concerned about the properties of light on the Electromagnetic Spectrum and more concerned about the effect of the light that is visible to us. On this closing Sunday of Epiphany we turn our attention to the story of the Transfiguration of Jesus, a story in which we come to an understanding of “the glow that illumines.”

The story of the transfiguration of Jesus lies squarely at the center of The Gospel According to Mark between Jesus’ baptism and his resurrection. The transfiguration “recalls the baptism of Jesus, with the voice from heaven and the identity of Jesus as God’s Son. Here, however, the voice speaks to the disciples, not to Jesus.” (Preaching through the Christian Year B, Craddock, Hayes, Holladay & Tucker, Trinity International Press, Harrisburg, Pennsylvania, 1993, page 126).

A voice tells Peter, James and John: “Listen to him!” (Mark 9:7) The story of the transfiguration of Jesus is patterned after the story of Moses’ experience of God on Mt. Sinai (Exodus 24 & 34). All of the elements are there: the six days of waiting, the cloud, the transfiguration, the voice, and the descent from the mountain.

Jesus takes Peter, James and John up a high mountain and once there the Bible tells us that Jesus was “transfigured before them - his clothes became dazzling white, such as no one on earth could bleach them” (Mark 9:4).

As for the appearance of Elijah and Moses with Jesus, both had come be associated with the coming of the Messiah both in Judaism (Malachi 4:1-6; Deuteronomy 18:15-18) and Christianity (Reveleation11:3). Their appearance with Jesus becomes a confirmation that the anticipated messiah and the end times are fulfilled in Jesus. “That they disappear, leaving only Jesus, says that the old is ended; the new has come” (Ibid.)

There is no glare to obscure what the disciples see. But Peter, James and John are terrified. What could they say? Peter says something about building about building three dwellings one for Jesus, one for Moses and one for Elijah.

What caused them to be terrified?

The transfiguration begins in Chapter 8, verse 22 with the healing of a blind man and ends with the healing of a blind man in Chapter 10, verse 52. In between, Jesus predicts his death three times (Mark 8:31; 9:31; 10:33-34) and “on each occasion the disciples demonstrate their inability to accept a cross and death as being anything but a contradiction of all that [the] messiah and kingdom mean.” (Preaching through the Christian Year B, Craddock, Hayes, Holladay & Tucker, Trinity International Press, Harrisburg, Pennsylvania, 1993, page 127).

Perhaps the terror they experienced was not in what they were able to see in the visible light, but in what Thurber referred to as “the glow that illumines.” Perhaps they were finally beginning to “perceive” and to understand Jesus’ words: that rejection, suffering, death and resurrection were integral to his mission and purpose and that the way of the cross is equally integral and inescapable for them and for all who would follow him (Mark 8:34-38).

“The transfiguration is . . . a powerful word to us to take up our cross and follow Christ, to walk in his way . . . ” but it does not mean that “we should seek or regard suffering as a spiritual good in itself or as inherently saving or redemptive. Jesus did not die because his suffering could purge the world of sin and evil. He died because the powers of evil sought to destroy his witness to nonviolent love, justice and truth.” (Feasting on the Word, Year B, Volume 1, Bartlett & Taylor, Westminster/John Know Press, Louisville, Kentucky, 2008, page 454)

Eventually he returned to the district of Kona where he was raised under the tutelage of his uncle, a kahuna or priest who was taught by the High Priest Hewahewa, at Hikiau Heiau at Kealakekua Bay. When ʻŌpūkahaʻia was 17 years old, he dove into the waters of the bay and became a seaman on board the ship Triumph. His journey took him to China and the West Indies and eventually to New Haven, Connecticut.

He arrived in New England in 1810. In the years that followed he became a member of the Foreign Mission School where he began a translation of the Bible into the Hawaiian language. It was always his desire to return to Hawaiʻi to share his new-found faith.

On February 17, 1818 he died of typhus fever in Cornwall, Connecticut at the age of 26. Although he was not able to return to Hawaiʻi, ʻŌpūkahaʻia inspired a generation of men, women and children from the American Board of Commissioners for Foreign Missions to make the long and difficult journey from New England to Hawaiʻi beginning in 1819. Over the next three decades more than 100 Congregational missionaries, inspired by ʻŌpūkahaʻia’s life would make the journey to our islands.

Today ʻŌpūkahaʻia’s life continues to inspire a new generation of men and women from Hawaʻii into a life of service in our churches. In a journal entry dated March 5, 1816 ʻŌpūkahaʻia wrote: “I have just now been thinking of the prophet Elijah: how he prayed to his God, when he went up to the top of Mount Carmel, and how he put his face between his knees and prayed to the God of heaven. O, how much better it is to spent (sic) time now in such a way of praying” (Memoirs of Henry Obookiah, Digital Edition)

I imagine ʻŌpūkahaʻia saw in the stories of the transfiguration of Moses and of Jesus “the glow that illumines” the way to a life of service. As his health began to decline, it is said that shortly after eating breakfast one day, he turned to one of the four young Hawaiian men who would make the journey back to Hawaiʻi and said, “If you live to go home, remember me to my uncle.” Not long afterward, his physician said to him, ‘How do you feel now . . .’ He answered, ‘Very well. I am not sick. I have no pain. I feel well.’

The expression of his countenance was that of perfect peace. He now seemed a little revived, and lay in a composed and quiet state for several minutes. No alarm was given, until one of his countrymen who was standing by his beside exclaimed, ‘ʻŌpūkahaʻia’s gone.’

All sprang to the bed. The spirit had departed – but a smile, such as none present had ever beheld – an expression of the final triumph of the soul, remained upon his countenance” (Memoirs of Henry Obookiah, Digital Edition). The light in his eyes was gone but “the glow that illumines” remained. For 175 years ʻŌpūkahaʻia remained buried at the Cornwall Cemetery in Connecticut. Through the efforts of his lineal descendants, his skeletal remains were disinterred and reburied in the cemetery of Kahikolu Congregational Church overlooking Kealakekua bay on August 15, 1993.

At his burial site in Cornwall Cemetery was the inscription: “Oh, how I want to see Hawaiʻi! But I think I never shall – God will do what is right. “He (sic) knows what is best.” The time had come for ʻŌpūkahaʻia to “see Hawaiʻi” again.