"The Proclamations We Make"

Today is the First Sunday in Lent. Over the course of the next 40 days we will recall how Jesus went out into the wilderness after he was baptized in the Jordan.

Just as ancient Israel” experienced God in passing through the waters of the Red Sea only to encounter trials and tests in the wilderness, so Jesus also experienced God after he is baptized and plunged into the wilderness to face his own trials and tests. “The forty days” Jesus spends in the wilderness, “is reminiscent of significant periods in Israel’s relation to God, including the journey from Egypt through the wilderness for forty years until they reached the promised land (1 Corinthians 10:1-1) (Preaching Through the Christian Year B, Craddock, Hayes, Holladay & Tucker, Trinity Press International, Harrisburg, Pennsylvania, 1993, page 140-141).

The power of the experience for Jesus is made clear in the account we find in our reading from The Gospel According to Mark. “Jesus fully identifies with the people of God who were, and are, tested in the wilderness. For Israel, the wilderness symbolized some extraordinary experiences of God” (Exodus 19; Hosea 2;14) (Ibid., page 141).

“For forty days,” during Lent “we are asked to go into a [spiritual] wilderness place and to prepare ourselves for the journey of discipleship. [The Season of] Lent asks us to wrestle with the hard stuff: to pray, to fast, to do something new . . . to face temptation and to choose to follow Christ . . . ” (Living by the Word, Emily C. Heath, Christian Century, January 31, 2018, page 20). 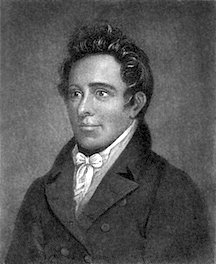 It could be said that a young Hawaiian man named ‘Ōpūkaha‘ia wrestled with the hard stuff: to pray, to fast, to do something new.” ‘Ōpūkaha‘ia grew up along the coastline of Ka‘ū on the island of Hawai‘i.

His family lived in the village of Nīnole, near an area of dry grasslands. It is said that life was far from idyllic. Freshwater was scarce and though life could be hard, especially when famine hit, ‘Ōpūkaha‘ia grew up being nurtured within his family, “protected and loved by his extended family, by his extended ‘ohana” (The Providential Life of Henry Obookiah, Christopher L. Cook, Pa‘a Studios, Waimea, Kaua‘i, Hawai‘i, 2015, page 2).

It was in the late summer of 1796 that warfare broke out. Nāmakehā, the warrior chief of Ka‘ū, sought to remove control from the great warrior king Kamehameha by moving his army to the Puna and Hilo districts of the island.

Kamehameha responded by sending a fleet of war canoes landing a Kaipalaoa on the north side of the mouth of the Waiakea River. Kamehameha crushed Nāmakehā’s army and to emphasize what would happened to any chief who dared challenge his rule, he ordered his men to slaughter the surviving Ka‘ū warriors and their camp followers that included women and children who provided food and water just out of battle range (Op. cit., pages 2, 4)

It was at Kaipalaoa that ‘Ōpūkaha‘ia saw his mother, father and baby brother killed by Kamehameha’s warriors. It is not clear why his life was spared but he was held captive by the warrior who murdered his parents and taken into exile to Kohala.

In time, his uncle Pahua, a kāhuna pule or priest at Hikiau Heiau in Kona made his way to Kohala during the Makahiki season. The procession stopped at each valley complex to collect taxes, to join in feasting and in Hawaiian games and sports activities.

It was in Kohala that Pahua met ‘Ōpūkaha‘ia. “Coming into contact with his uncle brought into the open [once again] the trauma ‘Ōpūkaha‘ia suffered” (Op. cit., page 6) The young boy sought the permission of his captor to return with his uncle to the temple at Hikiau in Kealakekua.

His captor threatened to kill him if he left. Pahua intervened and claimed ‘Ōpūkaha‘ia as his family. Because a kāhuna or priest held rank above a warrior, ‘Ōpūkaha‘ia’s captor relented and he returned with his uncle back to Kona.

It is said that ‘Ōpūkaha‘ia remained bitter towards the man and his wife. Though they were kind to him, he was unable, at least at that point in his life, to forgive them for the murder of his family. Once he returned to Hikiau, his love of learning blossomed under the tutelage of his uncle. He was being trained to become a kāhuna himself.

“The practice of the ancient Hawaiian religion served to quiet the darkness in ‘Ōpūkaha‘ia’s spirit” (Op. cit., page 8), but deep inside the trauma of the death of his parents and brother haunted him. If he was to begin a new life, he might need to leave his Hawai‘i.

Kealakekua Bay was already a port for many trading ships from America, Great Britain, France and Russia. Change was on the horizon and ‘Ōpūkaha‘ia could sense it was coming.

That day came for him in 1809 when he met a sea captain named Caleb Brintnall, the master of the seal-hunting brig Triumph. Seeking passage on the ship, ‘ Ōpūkaha‘ia dove into the bay and swam out to ship. At first his uncle objected to ‘Ōpūkaha‘ia desire to leave but after requiring the sea captive to provide the sacrificial offering of a pig, he bid his nephew farewell.

Ōpūkaha‘ia’s journey would take him to China and the West Indies and finally to New Haven, Connecticut after a year-long voyage. It would be in New Haven that his desire for “learning” would continue and eventually lead him to wholeheartedly accept Christianity as his new found faith.

His desire was to return to Hawai‘i to share his faith. However, it was not to be. Ōpūkaha‘ia died of typhus on February 17, 1818 in Cornwall, Connecticut at the age of 26.

Although he was not able to return home, his life and death inspired others to make the long voyage from New England to Hawaiʻi. In the years that followed, the mission to Hawaiʻi saw the birth of many churches including Keawalaʻi here in Mākena.

There are those who make much of how he was destined for a life as a “pagan” priest and that he was saved by the grace of God from living his life as an idolater. Much may be said about the theology of sin and salvation that permeated the thinking of the Foreign Mission School in Cornwall.

Among his own writings, ‘Ōpūkaha‘ia seemed to have embraced the thought that he was a sinner and that by accepting Jesus as his Lord and Savior, he would be saved from eternal damnation. But what sin would we attribute to him to explain the trauma that devastated his life when he witnessed the death of his parents and brother at the hands of a warrior during a time of war? What sin did he commit that he would have to witness the abandonment of their bodies in a forest?

Some say the death of his family led to a profound trauma, one in which it is said he brooded over “the cruel events that robbed him of his family almost to the point of suicide (Memoirs of Henry Obookiah, Edwin Dwight, Woman’s Board of Missions for the Pacific Islands, Hawai‘i Conference – United Church of Christ, Kingsport Press, Kingsport, Tennessee, 1968, page xi). I believe what saved ‘Ōpūkaha‘ia was not guilt but love. It was God’s love made manifest in others.

It is said that as he lay dying, he raised his hands and said, “Oh, how I want to see Hawai‘i! But I think I never shall. God will do what is right . . . what is best.” Then he turned to one of his Hawaiian companions aware that he was once destined to be a kāhuna at the temple at Hikiau, “ . . . if you live to go home, remember me to my uncle.”

When Jesus came up out of the water after being baptized by John in the Jordan, he saw the heavens torn apart and the Spirit descending like a dove on him. And a voice came from heaven proclaiming, “You are my Son, the Beloved, with you I am well pleased” (Mark 1:10-11)

Before he died, ‘Ōpūkaha‘ia” bid farewell to those who were at his bedside. He shook all of their hands and said, “Aloha ‘oe. My love be with you.” I can well imagine that he may have heard a voice proclaim, “You are my beloved child, with you I am well pleased.”

Throughout this season of Lent, may we proclaim the good news of God, saying, “The time is fulfilled, and the kingdom of God has come near; repent, and believe in the good news” of God’s love. Amen.