Yoweri Museveni won a fifth term as the President of Uganda this weekend in an election marred by violence and allegations of voter fraud. Museveni came into power in 1986. In 2005, the Ugandan constitution was changed to allow him to extend his time in office. 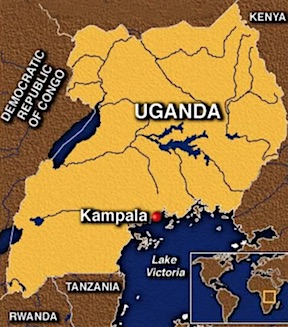 His closest rival, Kizza Besigye, was arrested three times over the last several days and is currently under house arrest in Kampala, the nation’s capital. While some may decry what has happened in Uganda and others insist that that would never happen here in the U.S., it would seem that gaining and maintaining status and power seem to be twin temptations that we know all too well.

We are in the midst of an election year in this country. As the presidential primaries move from one state to the next to determine who the nominees will be for a political system that is dominated by two parties, we find candidates who “often try to make themselves look better than they actually are – and their opponents look worse than they are” (Feasting on the Word, Year C, Volume 2, Bartlett & Taylor, Westminster/John Knox Press, Louisville, Kentucky, 2009, page 68).

There is talk of political insiders who do us no good and those who are outside the Washington D.C. beltway who promise us that the better days are ahead. Talk of politics is not new to us.

We know of such talk in other places in our lives. When some are quick to fault others when things are not going well at work, we throw up our arms in exasperation and declare that such is the way of “office politics.” And when we find ourselves equally exasperated about decisions that are made in churches that are not to our liking, we bemoan the meddling of too many in “church politics.”

Our inclination in the church is to say that religion and politics do not mix. We are convinced that at best Jesus was “innocent of the realities of politics” or at worst ignorant of its consequences (Op. cit.).

Well, our reading from The Gospel According to Luke this morning makes clear, in five verses of the Bible, that Jesus was no stranger to politics, especially the politics of his day (Op. cit.). Prior to his encounter with the Pharisees, Jesus said that when the kingdom of God arrives in its fullness, “some are last who will be first, and some are first who will be last” (Luke 13:30).

How can that be? Was he naïve in not understanding that his remark would be perceived as a threat to those in positions of power and authority especially for someone like Herod Antipas, the son of Herod the Great? The Pharisees warn Jesus that Antipas is intent killing him and that he must flee immediately.

It is ironic that the Pharisees would be the first to warn Jesus. Up until this point, we would be hard-pressed to count them among Jesus’ friends. But why the sudden change? Why the concern for Jesus’ safety?

It is likely that they themselves saw Jesus as a threat to their power and authority. Perhaps, as some have suggested, the Pharisees saw an opportunity to retain their own status and power by having Jesus believe that it was best to for him to leave Herod’s jurisdiction.

By driving Jesus away and into the area governed by Pilate, some have surmised that Pilate himself would figure out a way to finally be rid of Jesus. Whatever the reasons for their willingness to warn Jesus of Antipas’ intent, Jesus responds to the Pharisees with what can only be seen as his own warning (Op. cit.).

He reveals that he knows what they are up to in his response. “Go and tell that fox for me . . . ” that “I am casting out demons and performing cures today and tomorrow” Luke 13:32).

We might conclude that “casting out demons and performing cures” may not be the best strategy for making a political point. But Jesus is aware that his presence among the poor and the neglected can easily undermine those who are in positions of power and authority.

When Pope Francis prayed for thousands of migrants last Wednesday at the border between Ciudad Juàrez, Chihuahua, Mexico and El Paso, Texas who have died fleeing persecution, war and poverty from Central and South America, he was criticized by aspiring politicians for “being political.” It is not surprising to me that those in positions of power and authority would feel threatened by what Jesus did by “casting out demons and performing cures” or by what Pope Francis did by simply praying for those seeking refuge.

Over thirty ago, I had an opportunity to visit El Paso and Ciudad Juàrez as a member of a delegation that included members from various Christian churches across the U.S. We were invited to visit the maquiladoras or plants and factories along the U.S.-Mexico boerder that were beginning to be established and to see firsthand the conditions for workers in those plants and factories.

Today, over 1 million Mexicans work in 3,000 maquiladoras or manufacturing or export assembly lines producing parts and products for the U.S. Mexican labor remains inexpensive and thanks to the North American Free Trade Agreement (NAFTA), the almost non-existent taxes and custom fees are a financial benefit for corporations in the United States.

I imagine Jesus would say the maquiladoras as we know them today would not be a part of the kingdom he proclaims. Would he back off if he was confronted? Probably not.

In his response to warning of the Pharisees that his life was in imminent danger, he makes it clear that he will not flee but continue on the city of Jerusalem. He knows that he will not be welcomed in the city.

In some ways, Jesus was really the ultimate “outsider.” He becomes increasingly aware of the scorn and violence that awaits him in the city.

How easy it would have been for Jesus to condemn those who were hell-bent on destroying his life? Instead, he offers a strong and tender lament for the people and the city.

“How often I have desired to gather your children together as a hen gathers her brood under her wings, and you were not willing” (Luke 31:34). There is no doubt that those who heard Jesus that day knew well enough the references to the God of Israel as the one “under whose wings you have come for refuge” (Ruth 2:12; Psalm 17:8; 36:7; 57:1; 61:4).

It would seem that the Pharisees, Herod and those in Jerusalem wanted to maintain their positions of power and authority. But Jesus calls each into account with the warning that if they do not change their ways, the destruction that comes will be of their own doing: “See, your house is left to you” (Luke 9:35).

Bishop Desmond Tutu of South Africa recalls a lesson he learned long ago. “My father always used to say, ‘Don’t raise your voice. Improve your argument.’ Good sense does not always lie with the loudest shouters...” (Believe: The Words and Inspiration of Desmond Tutu, Blue Mountain Press, Boulder, Colorado, 2007, page 40).

Jesus raises a strong and tender voice for the people of Jerusalem and for us – not a mean, nasty voice - reminding us that God seeks to gather us all in as a hen gathers her brood under her wings. Yes, we are in the midst of an election year here in the U.S. But we are also in the midst of our season of Lent – a time in which we have an opportunity to offer a strong and tender word of hope in a world filled with too much anger, too much hatred, too much despair.