Both articles appeared on the front page of The Maui News this week. We learned of the tragic deaths of Emmanuel Tabbay, 19, and Edelene Parilla, 18, on Tuesday. Both were walking near the shoreline in area known as “Chutes and Ladders” along Honokohau Bay to see tide pools when Parilla was swept into the ocean by a large wave. Tabbay tried to save her and in the process lost his own life (“Families mourn loss of 2 teens” & “Woman swept away by wave, man jumps in after her”, The Maui News, Wednesday February 18, 2015, pages A1 & A4). 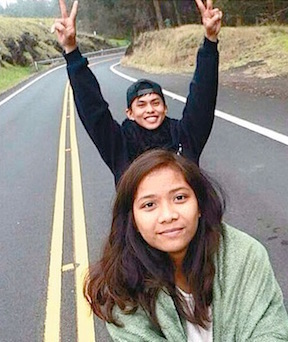 Their deaths are a tremendous loss for their families and friends. They were gifted young adults whose lives touched many in the wider community of Maui. We join with many others in offering our condolences to the families of both teenagers.

Just the day before, the National Weather Service had issued a high-surf advisory for the north-facing shores of Maui. Late in the week, The Maui News reported that “an ocean safety video nearly a decade in the making . . . debuted at Kahului Airport with a goal of stemming the growing number of ocean-related deaths.”

The article noted that in addition to the deaths of Tabbay and Parilla, Larry Robins, a 53-year-old visitor from Spokane, Washington died shortly after being pulled from ocean at South Maluaka Beach Park.

The park is located south of the Mākena Beach & Golf Resort, a short walk from our church (“Safety video now showing at Kahului Airport”, The Maui News, Saturday, February 21, 2015, pages A1 & A4). Over the last several weeks the area has been affected by rough surf and high winds. We also offer our condolences to the Robins family.

Plans call for the safety video to be shown on the Maui Visitor Channel which is available in hotels, condominiums and residences throughout Maui County. Although the video advises visitors to read posted warning signs at beaches or along hiking trails, it is important for those of us who live on island to also take heed.

It is tempting to assume that in our idyllic tropical climate that we need not worry about the elements of nature wreaking havoc on our lives. But we know despite the promotion of ecotourism and the attraction of extreme sports, any thought of taming nature requires us to consider the ways in which the wilderness is a place where we are tested.

In recent years two American biographical films remind us that when we are tested, we sometimes fail, we sometimes succeed. In 2007 actor Sean Penn directed “Into the Wild” – a film adapted from Jon Krakauer’s book of the same title. It was based on the life of Christopher McCandless.

McCandless ventured out alone into the Alaskan outback in 1992. He had no map and only a ten-pound bag of rice for food. His solo attempt to live off the land in the sub-arctic wilderness represented what some say was the ultimate test – of facing “demons” in his own family life.

Some have pointed out that by plunging into the wilderness, McCandless had unwittingly slipped into his own death trap. He lasted 113 days. It was later determined that he died of starvation, a death that was exacerbated by the consumption of seeds from a wild potato plant that were coated with a poisonous mold. He was 24 years old.

In 2014 Jean-MarcVallée directed “Wild”- a film based on the memoir of Cheryl Strayed. With the dissolution of her marriage and the death of her mother, Strayed said she lost all hope. She was 26 years old.

After a decade of reckless and destructive behavior, she makes the same rash decision as McCandless to venture out alone into the wilderness. Coincidentally, she chooses to hike along the Pacific Crest Trail, a trail that McCandless himself had travelled that eventually took him to the Oregon Coast and finally to Alaska.

With no experience she hikes over a thousand miles on sheer determination. Against all odds, she forges ahead on a journey that maddens, strengthens and ultimately heals her.

In both books and both films we are given a glimpse of what drove McCandless and Strayed into the wilderness. In our reading from The Gospel According to Mark, Jesus is driven out into the wilderness not by despair but by the Holy Spirit.

Mark wastes no time in letting us know that Jesus “was in the wilderness for forty days, tempted by Satan; and he was with the wild beasts; and the angels waited on him” (Mark 1:13). Unlike Matthew or Luke who provide us with a longer narrative of the temptation, Mark’s brevity lacks any explanation as to the details of what happened to Jesus.

He is more concerned about tying Jesus’ temptation in the wilderness directly to Jesus’ baptism. He continues the theme of a new exodus that is portrayed by the ministry of John the baptizer.

As Israel experienced God in passing through the waters of the Red Sea only to encounter trials and tests in the wilderness for forty years, so Jesus, still wet from his baptism in the Jordan, is plunged into the wilderness to face his own trials and temptations for forty days (Preaching Through the Christian Year B, Craddock, Hayes, Holladay & Tucker, Trinity Press International, Harrisburg, Pennsylvania, 1993, pages 140-141).

Mark’s brevity in describing the temptation of Jesus in the wilderness underscores the intensity for Jesus. That intensity is reflected in the language that Marks employs: “drove him out (literally, threw or cast him out); tempted (tested, put through trials); Satan (the adversary, the opposing one); wild beasts (wild animals and demons were in the wilderness, Isaiah 34:8-14; some believed demons dwelt in wild beasts); angels waited on him (not after the temptation but during it)” (Ibid., page 141).

Jesus’ temptation provides us with a preview of the many, many struggles that will test him during his own life. Neryl McCallum has written the poem entitled “Wilderness” (Seasons of the Spirit, SeasonsFUSION, Lent, Easter 2015, Wood Lake Publishing Inc., 2025, page 41. In it, she provides Jesus with a voice. She writes:

Here, in this demanding place,
accompanied by wild things,
and nourished by nature,
considerations are made clear.
Here, the echo
of your boldly claimed words
“you are my beloved,”
reside with me these forty days,
and I know these words
are not just for me,
but are for all things
and is the good news that I will proclaim.