"The Cross We Bear"

The Rev. Billy Graham died on Wednesday morning. He was born almost 100 years ago. He was ordained as a Southern Baptist minister and became an evangelist who held large indoor and outdoor gatherings that became known as the Billy Graham Crusades. For over six decades, the crusades were broadcast on television.

At the conclusion of every crusade he would invite people to come forward to “accept Jesus Christ as their personal savior.” Whenever there was a broadcast on television, my mother would make certain that the television was tuned to the proper channel.

It would be fair to say that I did find his preaching less bombastic than the hell-fire-and-brimstone preaching of others who were convinced that unless we accepted Jesus as our personal savior, we were destined to go to hell. Satan would make certain of that.

Somewhere along my own spiritual journey I came to the conclusion that I have little time and little interest in talking about Satan. “Oh, but Satan is real,” someone would say.

Still, I have very little interest in giving any thought or any time to talking about Satan. We should be about the business of preaching Christ crucified and risen and to proclaim that neither the principalities nor powers of the world, including Satan, can separate us from the love of God which is in Christ Jesus.

In our reading from The Gospel According to Mark, Jesus forcefully rebukes Peter by calling him Satan. The Rev. Emily C. Heath is the senior pastor of the Congregational Church in Exeter, New Hampshire admits that she gets “a little uneasy” when a passage of scripture mentions Satan by name (Christian Century, January 31, 2018, page 21).

She says, “I don’t want to scare people into faith. I want to focus on loving God because God loves us, not telling people they should love God or else (Op. cit.).”

As for our reading this morning, Heath adds, “ . . . it’s hard to talk around [it] in this case. Jesus is with [Peter], and he starts to explain what’s about to happen. Jesus knows he is going to be turned over to the authorities, that he will suffer and be killed – and then rise again” (Op. cit.).

To say that news of Jesus’ death is not good news to Peter’s ears would be an understatement. Like Andrew and James and the other disciples, Peter left everything behind – his work, his family, his home, his community – to follow Jesus and now Jesus is telling him that he is going to be killed.

Perhaps growing fearful for his own life, Peter takes Jesus aside and is basically filled with consternation. “What’s up with all this talk about death and destruction?”

Jesus not only ignores Peter’s plea he seems to bully him. “You are an idiot, Peter! You have no idea what you are talking about.” He yells at him: “Get behind me, Satan!”

I suppose Peter could have cowered or demurred like Geraldine – a character played by the late American comedian Flip Wilson – who often insisted whenever she was caught in a difficult or compromising situation: “The devil made me do it.”

We may want to excuse Jesus for what comes close to bullying, but a closer look at the exchange between Jesus and Peter makes clear that far from belittling Peter, Jesus’ desire is to prepare the Peter and the other disciples for the difficult days that lay ahead for all of them.

“The Hebrew equivalent of the word Jesus calls Peter is ha-satan, which doesn’t mean ‘devil’ at all. It’s not even a proper name. It simply means ‘the accuser’ or ‘the adversary’” (Op. cit.).

Jesus is not saying that Peter is someone evil, only that he is standing in the way of what is to come. All Jesus can do is tell Peter that it is not going to be easy and it is not going to end well and if Peter is going to stand between Jesus and the cross, then he is an adversary (Op. cit.).

The question for Peter and the other disciples is whether they are ready to walk with Jesus. The burdens they will bear; the burdens you and I bear as his disciples today, will not be easy.

We know that we have many adversaries that keep us from being his faithful disciples. We call them by different names – “fear, pride, addiction, hatred, anger, greed, insecurity, indifference, apathy and a million others” (Op. cit.).

Would we dare to counter talk that the young people of Marjory Stoneman Douglas High School are simply “crisis actors?” Would we insist they are too young and naive to understand the complexities of living in an adult world? Would we be so quick to say they are not capable of raising their own voices without the help of adults?

Scripture reminds us that Jesus did a lot of rebuking. Aside from demons, it was always the adults who were being rebuked, including the disciples.

We know the story of how the people were bringing the children to Jesus that he might touch them; and the disciples decided to do some rebuking of their own insisting that Jesus ought not be troubled by the children. “But when Jesus saw it, he was indignant and said to them, ʻLet the children come to me. Truly, I say to you, whoever does not receive the realm of God like a child shall not enter it.ʻ And Jesus took them in his arms and blessed them, laying his hands upon them” (Mark 10:13-16)

This morning we seek to be his faithful disciples. We offer our blessing for the students of Marjory Stoneman Douglas High School. 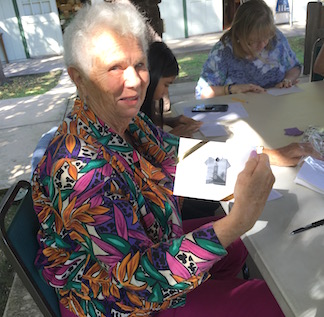 This morning we seek to be his faithful disciples. We do so by affirming the ministry of those who have chosen to live a life of service. Affirmation of ministry is the act of the local church of the United Church of Christ which recognizes the diverse gifts of its members and celebrates thee particular ministry of each person in the life of the church and in the various settings in the world. There are different kinds of spiritual gifts, but the same Spirit gives them.

Liturgist: There are different ways of serving, but the same God is served.

Kahu: There are different abilities to perform service, but the same God gives ability to each of us for our particular service.

Liturgist: The Spirit’s presence is shown in some way in each person for the good of all.

Kahu: Christ is like a single body, which has many parts.

Liturgist: It is still one body even though it is made up of different parts.

Liturgist: All of us are Christ’s body, and each one a part of it.

Kahu: You will find an insert in your worship bulletin with the names of those who were elected or appointed to serve as leaders of the church – some attend this first service regularly on each Sunday, others attend the second service. We will call out each one by name. First, for those serving within the church: For the Officers of the church: Robert Hobson, Moderator; Bruce Burkitt, Vice-Moderator; Edie Kapiko, Secretary; Karen Nelson, Treasurer.

Kahu: For the Lūʻau Committee: Fran ʻAʻarona, Anita George, Nick George, Taka Harada, Edie Kapiko, Judy Kapohakimohewa, Paul Kenolio and Thom. Probst. And for those serving in ministries outside the church: The Rev. Danette Kong at Hospice Maui and the Rev. Bob Nelson at Hale Kau Kau and at Maui Memorial Medical Center.

Liturgist: All have been called by God, in accordance with the faith and order of this church, to serve among us. They have accepted their call and are before us in witness to their willingness to serve.

Kahu: Sisters and brothers in Christ, it is an honor to be entrusted with the kuleana for particular service in the ministry of the church, whether gathered in this place or elsewhere. Having prayerfully considered the duties and responsibilities of your ministry, are you prepared to serve with the help of God in Christ’s and for the glory of God? If so, please say, “I am.”

Do you promise to exercise your ministry diligently and faithfully, showing forth the love of Christ? If so, please say, “I do, relying on God’s grace.”

Liturgist: Brothers and sisters in Christ, we gather in celebration of the joy that is ours to be partners with you in the service of Jesus Christ. We promise to love you, honor your leadership, and assist you that together we may be a faithful church of Jesus Christ.

Kahu: Let us pray: Eternal God, you have called those who stand before us to serve you in this household of faith and in the world, which you have entrusted into our care and keeping. Send your Holy Spirit on them that they may serve among us with honor and faithfulness.

Help each to be diligent in his or her duties that you church may prosper in the commitment we have made “to share your aloha from generation to generation.” May their presence among us prove worthy for all of us to follow for we pray in the name of Jesus Christ – ma ka inoa o Iesū Kristo. Amen.


[ The photo above is of Liz Dawson who, one recent weekend, demonstrated
to a new generation her craft of origami-folding tiny paper aloha shirts
that she has donated to the church's fundraising Silent Auctions over the years.
Mahalo Aunty Liz! ~LN ]