A cluster of Hanu’s toys sits on my living room floor. He brought them out one morning early in the week insisting that I stop the conversation I was having with someone who was visiting and play with him. I would shush him away, only to have him return a moment later with a toy squeaking in his mouth. 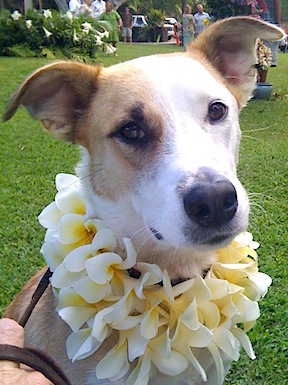 If I tossed it across the room, he would run after it. And if he got bored with that toy, he would go and get another one.

This went on for about a half hour. It was a bit of an annoyance but now it is a memory that I cherish. He was so full of life, bouncing across the room and prancing back each time I tried to get him out of my study at home.

Hanu died on Friday. We were minutes away from taking a flight to Honolulu to a 24-hour animal hospital.

A few weeks ago someone noticed that his right eye was not “tracking” properly. I noticed it too. I took him to my veterinarian. His eyes were checked and nothing seemed wrong.

On Wednesday of this week he did not eat his dinner and on Thursday, he would not go for his morning walk. I took him back to the veterinary clinic. Everything seemed okay – no fever, his breathing fine, his heart rate was normal.

But by midday, he was not doing well. I left work and rushed home having heard from someone who was there working on repairs to the roof of my house. We went back to the clinic. A blood test was done. Everything came back normal – his liver, his blood cell count.

We returned home but before the night was over, it was clear something was amiss. A good friend came by and suggested that he may have been going through convulsions. He was not able to stand or walk. He did not eat his dinner.

That night I carried him to bed with me. By 3:00 a.m. Friday morning he had another convulsion. We ended up sleeping on the floor until 6:00 oʼclock that morning. I took him back to the clinic at 8:00 a.m.

By midmorning the veterinarian called and suggested that he be taken to Honolulu. I made arrangements for a flight and a car. I stopped by to pick him up at 3:00 p.m. Friday.

As we drove to the airport I noticed his breathing grew heavier and heavier. I called the veterinarian and said I wasn’t sure a trip to Honolulu would help. She reassured me it was his best chance. They would be able to provide 24-hour care.

I arrived at the airport a half hour early and we waited. It was during that time that I talked to him reassuring him that I was there and that he needed to hold on. His breathing slowed; his tongue turned from pink to purple and I could see whatever life was in him was draining away.

I called the clinic and told them that he just died and that I was on my way back. It was then that I received a call from a friend saying it was best to go to the Maui Humane Society directly and make arrangements for Hanu to be cremated.

The staff at the facility were very helpful and the young man who came to get Hanu let me have a few last moments with him. And then he was taken away.

Before I left for the airport I emailed several of you to let you know what was happening. After Hanu died I asked someone to let you all know and that emails were okay but no calls for the moment. A few of you called anyway but that was okay.

I received numerous emails and want all of you to know how grateful I was for your words of comfort and for your thoughts and prayers. I promised all of you when Hanu came into my life that I would not have sermons about him too often.

I kept to that promise mentioning him on about two or three occasions in three years. But now that he has left, I owe it to him to tell you what a remarkable gift he was to me.

More than anything he taught me about how important our relationships are with one another – about what happens when we invest our time in each otherʼs lives – whether as spouses or partners, parents and children, friends and neighbors, human beings and animals. We create memories of joy that can heal the sorrow and sadness of the loss that comes with death.

I know some of us may insist that equating the loss of a pet animal with the loss of a human being is hardly comparable. But our readings from the Bible this morning suggest otherwise.

The writer of The Book of Ecclesiastes reminds us that judgment and the future belong to God. The words are worth repeating: “I said in my heart with regard to human beings that God is testing them to show that they are but animals. For the fate of humans and the fate of animals is the same; as one dies, so the other dies. They all have the same breath, and humans have no advantage over the animals, for all is vanity.”

“All go to one place; all are from the dust and all return to dust again. Who knows whether the human spirit goes upward and the spirit of animals goes downward to the earth?” (Ecclesiastes 3:18-21)

Over the centuries there have been theological debates about whether or not animals and dogs in particular go to heaven when they die. The writer of Ecclesiastes seems to suggest that the final judgment is not ours to make.

As far as I am concerned if I get to the gates of heaven and there are streets paved with gold and there are many mansions, but no dogs I am not going in. I would give all of that up to know that Hanu is there to say welcome home.

In our reading from The Book of Genesis, we are also reminded God made a promise after the great flood that the rainbow would be a sign of a new covenant between God and all of creation. “I make between me and you and every living creature that is with you, the sign of a new covenant for all future generations.”

“When I bring clouds over the earth and the bow is seen in the clouds, I will remember my covenant that is between me and you and every living creature of all flesh; and the waters shall never again become a flood to destroy all flesh.” (Genesis 9:12-16)

I count Hanu among the living creatures of God’s creation and believe there is a place for him in heaven – wherever that may be – because of the promises of our God. I now have a lifetime of memories – some filled with sorrow and sadness and others filled with joy and gratitude.

I spent the evening on Friday alone at home. I had to wash and clean the bed sheets and quilt. I carried him to the bed that night.

At 3:00 oʼclock Friday morning he woke up to a convulsion. He wet the bed. We moved to the floor and slept next to each other until the early morning. By then he had a second convulsion.

I called on a neighbor from across the street where I live if she could help me carry him to the car. I pulled out a sheet from my linen closet and we wrapped it around him. He began flailing and I reassured him that I was right there with him.

He managed to knock over a vase on the bedroom floor. Three pieces broke off. I found two of the pieces and spent some time with some super glue piecing it back together again. I couldn’t find the third piece. I decided to leave it broken as a reminder of that moment when I was with him in the midst of his pain and suffering.

I picked up around the house last night. I saw his water bowl half full and still have not been able to empty it out.

Over a month ago a friend started putting up a fence around the front yard of my home. I wanted Hanu to have an area outside the house where he could “lounge.” If I feel any sadness it is that he did not live long enough to see its completion. I decided that once the yard is in I will use the water from his bowl for the plants that will be planted.

When the yard is pau you will have a chance to see it if you come by for a visit. It will be called Hanuʼs Yard.
I look at his photographs and a large portrait I have of him in my study and realize he died much too soon. I was not ready to let him go. We had just celebrated his third birthday in December with a lilikoi, guava, and haupia cake and vanilla bean ice cream.

I started to remember the places we had spent time together – at beaches and parks, here at church and walking around Wailuku - and I felt the crush of knowing that these were now memories. Some say “Hanu was a dog.”

That is true. He was “a dog.” But he was my dog and I dare to say he was God’s dog too and that made all the difference in the world to me.

If the writer of Ecclesiastes were Hawaiian, he or she would have written a portion of chapter 3, verse 19 in the following way: “Ho’okahi hanu iā lākou a pau. They (human beings and animals) all have the same breath.”

Hanu and I share that same breath – that ha. Many of you know his name comes from that verse of scripture. I saw that breath leave him on Friday afternoon. One day that breath will leave me and you and all whom we love in the same way.