The Eighth Sunday After Epiphany

It was said that she loved her family – two sons from a previous marriage, a third son from a second marriage. After her sons grew up and went on to live their own lives, she decided to open her home to children who had been placed into the foster care system.

Someone said, “She was never one who enjoyed an empty house.” Having children, whether her own or those whom she welcomed into her home, was what gave her great joy.

One of her sons said, “She believed that by caring for children who had been neglected or abused that they would be given a fair shot at life.” I wondered how she came to have such a heart of compassion.

“She was only four feet, eleven inches tall in high school,” her brother said. “The other kids would pick on her. So, one day I told her ‘I going teach you karate.’ She got good real fast.”

“The next time you see the one who bother you, you tell her you like see her after school for ‘beef.’” She did and she defended herself successfully and no one ever bothered her after that.

After last Sunday’s lesson from Jesus’ Sermon on the Mount, I am not sure that I could say unequivocally that “an eye for an eye or a tooth for a tooth” is sometimes justified. What I surmised from her brother’s story is that because she was picked on, she developed a level of empathy for others, especially children, which led her to become a foster parent.

She was born in 1942 here on Maui. She died a few weeks ago. It was at her memorial service a couple of nights ago that so many gathered to remember and celebrate her life.

In addition to her three sons, she became a foster parent to six children. She eventually made the decision to hānai all of them - to raise and care for all of them as her own children. In time she would go through the legal process of “adopting” them.

One of her hānai sons shared his memories of her. He got up from where he was sitting a few rows back. He approached the podium with a gentle stride.

“She loved me,” he said, “and I loved her. When I had nothing, when I had no one, she took me in and because of her my life has changed.”

He paused for second, turned and looked at the open casket and said, “I love you, mom.” He walked back to his seat and sat down.

There was no dazzling light, no bright cloud. There was no voice from heaven, just the voice of a young man whose life had been transformed by the love of his mother.

We began this Season of Epiphany with light as the magi followed a star to find the baby Jesus. Today the season comes to an end in the story of the transfiguration of Jesus as a young man up on a high mountain.

In our reading from The Gospel According to Matthew we learn that the word transfigured that is found in verse 2 is translated from the Greek verb metamorphoo. It is a word which suggest changes that occur deep within a person. 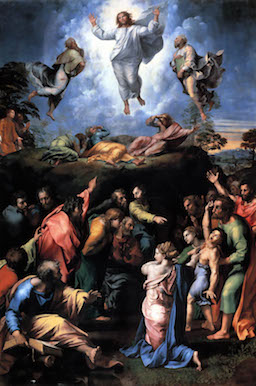 The transfiguration of Jesus is described in outward images that at first frightened Peter, James and John as they accompanied him to the mountain. It is said that they fell to the ground and were overcome by fear. (Matthew 17: 6) “But Jesus came and touched them, saying, ‘Get up and do not be afraid.’” (Matthew 17:7)

In our reading from The Second Letter of Peter it is Peter who reminds us that he along with James and John were eyewitnesses to the transfiguration. It is Peter who says, “We ourselves heard this voice come from heaven saying, “This is my Son, my Beloved, with whom I am well pleased.” (2 Peter 1:17-18)

Theologians may want to make much of the transfiguration of Jesus. “Epiphany, “ one writes, “culminates in the dazzling vision of Jesus on a mountaintop in which heaven and earth, history and future, all come together with sun, cloud, past prophets, and a voice from above to reveal the unique and beloved nature of Jesus as God’s son.” (Seasons of the Spirit, SeasonsFUSION, Advent, Christmas, Epiphany 2013-2014, Wood Lake Publishing, Inc., Kelowna, British Columbia, Canada, 2013, page 194) Such an assessment of what happened that day on the mountain is one I would not deny.

But I believe that what happened to Jesus that day on the mountain was far from a mystery. Jesus understood that he was loved and that is what transformed his life. That is what changed his life.

What do we say of ourselves? Do we believe that we are God’s beloved sons and daughters? Do we know the love of a parent or child, a spouse or partner, a friend? Or are we so weighed down by the burdens of the world and the burdens of our own lives that we have lost our way?

As the memorial service came to end I looked across the room and saw the young man sitting next to a young woman holding a baby. She turned and passed the baby to him. He reached out and pulled the baby to his chest in a loving embrace and I realized in that moment that he was transforming his son as he had been transformed.

I imagined him whispering into the baby’s ear, “There is no need to be afraid.”

Let us pray: God of every mountain and every valley may our hearts be stilled. May our souls be open to your grace. May we hear the words that will transform our lives this day: “You are my beloved with whom I am well pleased.” Amen.