I visited New Orleans many years ago. I don’t remember the year but I do remember discovering their version of a malasadas – although I imagine the folks in New Orleans would insist that a beignet with powdered sugar is not the same as a malasadas with white sugar - and the only place for any visitor to have his or her first beignet was at the Café du Monde Riverwalk Marketplace.

The city of beignets is also the city of jazz and jambalaya and while I enjoyed both, what I remember most about the city was that it was once a marketplace for the selling and buying of African slaves. I stayed in the French Quarter in a place that once served as the quarters for African slaves. I saw metal rings imbedded on the outside walls and learned that slaves were often shackled if they showed any signs of insubordination against their slave owner.

I also saw the leg irons that were used for punishment but also for control. The leg irons allowed for walking but prevented running or kicking.

Walter Johnson, a Harvard historian and author of Soul by Soul: Life Inside the Antebellum Slave Market, estimated that one million human beings were sold at state-ordered sales in the South between 1820 – the year the first Christian missionaries from Boston arrived in Hawai‘i – and 1860. There were slave trade marketplaces not only in Louisiana but in other Southern states.

Many of the slave markets were demolished after the Civil War but many remained. The slave market in St. Augustine, Florida today has a marker which reads, “Public Market Place.” In Louisville, Georgia, a public pavilion where slaves were once sold is now known only as “Market House.”

But on the other hand we know it is important to provide opportunities for contemplation, reflection, reconciliation and healing. The effort to expunge the history of the slave trade betrays the anger Jesus demonstrated in the Temple the day he told those who were selling doves, “Stop making my Father’s house a marketplace!” (John 2:15). One might be inclined to argue that we cannot equate the Temple site and the selling of doves with the downtown marketplaces of a city where slaves were sold.

The writer of The Gospel According to John wants us to know that when Jesus says, “Destroy this temple, and in three days I will raise it up” (John 2:19), he was speaking of himself. The religious authorities asked him for a sign of how he would rebuild the Temple in three days. In time, we know that he gave them the “ultimate and final sign, his death and resurrection” (Preaching Through the Christian Year B, Craddock, Hayes, Holladay& Tucker, Trinity Press International, Harrisburg, Pennsylvania, 1993, page 155).

But for me what is important about what Jesus did in the Temple is this: If we thought he was upset with the moneychangers for selling doves, can any of us imagine how angry he would have been to see a human being put up for sale in a public square?

Today is Amistad Sunday in the United Church of Christ. It is the day we remember and recall the events which happened in 1839. In February of that year, Portuguese slave hunters abducted a large group of Africans from Sierra Leone and shipped them to Havana, Cuba, a center for the slave trade. The abduction violated all of the treaties in existence at that time. 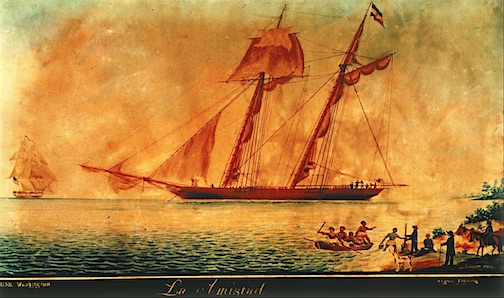 Fifty-three Africans were purchased by two Spanish planters and put aboard the Cuban schooner Amistad for shipment to a Caribbean plantation. On July 1, 1839, the Africans seized the ship, killed the captain and the cook, and ordered the planters to sail to Africa. On August 24, 1839, the Amistad was seized off Long Island, New York by the U.S. brig Washington.

The planters were freed and the Africans were imprisoned in New Haven, Connecticut on charges of murder. Although the murder charges were eventually dismissed, the Africans continued to be held in confinement as the focus of the case turned to salvage claims and property rights.

President Martin Van Buren was in favor of extraditing the Africans to Cuba. However, abolitionists in the North opposed the extradition and raised money to defend the Africans. Connecticut Congregationalists who were the forebears of those who were in the early mission companies that made their way to Hawai‘i in 1820 formed the Amistad Committee.

They organized a legal defense, eased the captives’ confinement during the lengthy court case, and eventually funded their return to Africa. Claims to the Africans by the planters, the government of Spain, and the captain of the brig led the case to trial in the Federal District Court in Connecticut.

The court ruled that the case fell within Federal jurisdiction and that the claims that the Africans were property the property of the planters were not legitimate because they were illegally held as slaves. The case went to the Supreme Court in January 1841, and former President John Quincy Adams argued the defendants’ case. Adams defended the right of the accused to fight to regain their freedom. The Supreme Court decided in favor of the Africans, and 35 of them were returned to their homeland. (The U.S. National Archives and Records Administration).

Many other Africans were not as fortunate. Richmond, Virginia was once the second largest center of the U.S. slave trade. Between 1830 and 1865 an estimated 350,000 people were sold into slavery there.

In 2016 Georgetown University, established by Jesuits, released a video with members of its Working Group on Slavery, Memory and Reconciliation reflecting on their experiences studying the school’s ties to slavery. The panel released a report with recommendations on how the university should make amends for the 1838 sale of 272 slaves to pay a debt (The Washington Post, September 1, 2016).

It’s difficult for me to understand how it was that many, many people who identified themselves as Christians would be quick to laud Jesus with praise for driving the money changers out of the Temple for selling doves while at the same time think nothing of placing a human being on a slave block for auction. Father Richard Rohr, a Franciscan priest offers his own insight about how we are to live our lives as disciples of Jesus Christ.

“Christianity is a lifestyle,” he writes, “a way of being in the world that is simple, non-violent, shared and loving. However, we have made it into an established religion and all that goes with that and avoided the lifestyle change itself. One could be warlike, greedy, racist, selfish, and vain in most of Christian history, and still believe that Jesus is one’s own personal Lord and Savior. The world,” he warns, “has no time for such silliness anymore. The suffering on earth is too great.”

As we continue through this season of Lent, we become aware that it was and is the suffering of the world with which Jesus was and is well aware. Jesus’ life and death were not shaped by circumstances and what happened when a decision was made that he be executed. For the writer of The Gospel According to John, Jesus himself laid down his life and he took it up again (John 10:17-18) for the sake of reminding us our devotion is due to God and God alone (Preaching Through the Christian Year B, Craddock, Hayes, Holladay& Tucker, Trinity Press International, Harrisburg, Pennsylvania, 1993, page 154).

The Temple was built as a witness to God and as a means of drawing persons near to God. When Jesus went into the Temple during the Passover and saw the money changers, he became angry that the witness of one’s devotion was no longer to God.

I would venture to say that the same may be said about the church - that the church here in Mākena was built as other churches have been built as a witness to God and as a means of drawing others near to God. While the world may be preoccupied with taxes and tariffs, trade agreements and the latest look at the stock market, Jesus compels us to step out of the marketplace and to put our devotion and trust in the One who made heaven and earth and all that is.