“The Glory of God”


In 1966 Time magazine published the infamous cover story “Is God Dead?” I was 16 years old at the time. Needless to say, it caused a great stir. 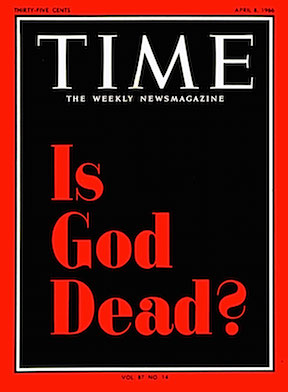 William Hamilton, a theologian, was the leading figure in what became known as the controversial Death of God movement during the 1960s. Hamilton was appointed to the faculty of what was then known as the Colgate Rochester Divinity School as the Chair of Historical Theology.

John T. Elison who was the religion editor at Time magazine when the article appeared, called the new movement “a theology without theos,” a belief that God was dead and that humans needed to press on without God. At the time, I was a teenager and while I had little interest in theology and the brouhaha that ensued, it made no sense to me.

Hamilton argued that we needed to find “a way to redefine Christianity as a possibility without the presence of God.” It is interesting that despite his assertion that God was absent from the world, Jesus remained a crucial figure for him for whom humans should seek to imitate. ('God Is Dead' Theologian William Hamilton Dies at 87)

Hamilton was not the only theologian who rejected the existence of God while embracing Jesus. Other leading figures emerged. But he was seen by others as the most articulate leader of the movement in the U.S.

Hamilton’s doubts about the existence of God did not occur overnight. It began when he was 14 years old. He witnessed an accident that left him questioning God’s goodness.

It is not clear why several of his friends decided to build pipe bombs but the bombs exploded killing three of his friends who were Christians but sparing the life of his other friend, who was the son of an atheist. Hamilton began questioning why a just and loving God would allow something like that to happen.

All through his formal education in theology, the questions continued. For some it seemed odd that he would continue to teach his own children about Jesus and the Bible. His turnaround occurred slowly over time, but that did not preclude others from responding to him with hostility, even death threats, after the article appeared.

Eventually he left Colgate Rochester Divinity School and moved to Florida and later to Oregon to teach. He never went back to church.

Hamilton struggled to make sense of what he experienced in his own life. I suspect that as a child of the scientific age, he had been taught to think critically and rationally about the world around him.

Many objected to Hamilton’s assertion, somehow convinced that he was a threat to their own belief in God and that he somehow had the power to cause the death of God. But the Death of God movement did not survive the 60s. In some ways Hamilton chose to ignore the reality that many others, including some of us here this morning, have also wondered as he did about the presence of a living and loving God in a world filled with sorrow and despair.

Rabbi Harold Kushner was faced with the question that troubled Hamilton when he looked at his own life. His three-year-old son was diagnosed with a degenerative disease. Kushner was told by doctors that his son would only live until his early teens. He wondered, “Why would God let such a thing happen?”

In 1981, Kushner’s book When Bad Things Happen to Good People included his reflections on the doubts and fears that arise in all of our lives when tragedy strikes. Yet Kushner chose to believe as we choose to believe that it is precisely in the midst of sorrow and despair that God is present, not absent.

As we continue through this season of Lent, our reading from The Gospel According to John reminds us that the one whom we call Emmanuel - which means “God with us” - will die (Matthew 1:23). The early disciples wondered: “Why? How can this be?”

As Jesus speaks to the disciples, it becomes evident they are not able to fully comprehend what he is saying until after the resurrection (John 2:17,22). Jesus speaks what is true to them when he says “Destroy this temple, and in three days I will raise it up” (John 2:19). Their response is telling as they look about the temple. “This temple has been under construction for forty-six years, and will you raise it up in three days?” (John 2:20).

It is not hard to see the irony in the dialogue between Jesus and the disciples. We know what they do not know; that is, that Jesus was speaking of his own death.

“The contrast is painfully clear. [The] temple, built as a witness to God and as a means of drawing persons near God, is now an object of adoration, an end in itself. It is, therefore, ripe for destruction. But in the throes of death and in a move toward self-preservation, the temple keepers will destroy the One in whom God and humankind meet.” (Preaching Through the Christian Year B, Craddock, Hayes, Holladay & Tucker, Trinity Press International, Harrisburg, Pennsylvania, 1993, page 155).

In our reading from the First Letter of Paul to the Corinthians, we are made aware that for those living in the first century, the message of a suffering messiah was a contradiction in terms (Mark 8:31-33). To be crucified on a tree was a sign of criminality (Deuteronomy 21:23; 27:26) and therefore an offense to the Jews. For the Greeks, a hero who died an ignoble death would be far from heroic.

To say that the “Jews demand signs and Greeks desire wisdom” may be a caricature, but some will say there is a core of truth to Paul’s words. For Jews and Greeks who had become Christians, the cross caused many to question and search for ways to understand how a living and loving God would allow a “beloved son” to be put to death.

Paul reminds us that for those who were in the early church in Corinth and for those of us who are in the church today, human wisdom and knowledge are insufficient for coming to an understanding of the ways of God. Hamilton was unable to make sense of the death of his friend. When his friend died, God died.

Kushner sought to make sense of the death of his own son. Unlike Hamilton, he concluded that far from being dead, God was and is alive.