“I ulu no ka lālā i ke kumu. The branches grow from the trunk of the tree.” That was the theme for our lūʻau yesterday as we welcomed members, friends and visitors back to Mākena for our annual gathering. 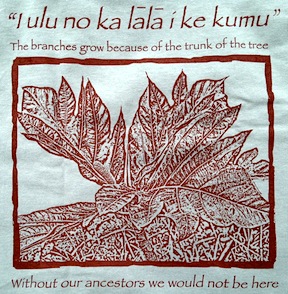 This particular ʻōlelo noʻeau or wisdom saying comes to us “from the extraordinary collection of Hawaiian sayings – collected, translated, and annotated by (the late) Mary Kawena Pukui” (ʻŌlelo Noeʻau: Hawaiian Proverbs & Poetical Sayings, Mary Kawena Pukui, Bernice P. Bishop Museum Special Publication No. 71, Bishop Museum Press, Honolulu, Hawaiʻi, 1983, Helu 1261, page 137) Pukui clarifies this particular saying by explaining and commenting on its meaning when she writes: “Without our ancestors, we would not be here.”

Her clarification states the obvious – that none of us would be here today were it not for our ancestors whoever they may have been. I would not be here were it not for my father’s parents who made the difficult journey from Japan to work in the sugar cane fields of Hawaiʻi two centuries ago.

I would not be here were it not for my mother’s parents. For whatever reason one side of the family made the journey from Tahiti or the Marquesas many, many centuries earlier. The other side of the family came from Portugal to also work in the sugar cane fields.

The same may be said for the young man in Jesus’ parable of The Prodigal Son – that his existence was made possible through his ancestors. The story is a familiar one.

A man has two sons. He divides the family inheritance at the insistence of the younger son and gives to each his share.

The younger son leaves home and travels to a distant country. There he squanders all he had been given in “dissolute living” (Luke 15:13). He is out to have a good time. But the situation goes from good to bad to worse very quickly. He finds himself eventually without work or money and hungry.

He is so desperate he hires himself to a pig farmer. It is said that “no good Palestinian Jew would be caught dead near pigs” (Feasting on the Word, Year C, Volume 2, Bartlett & Brown, Westminster/John Knox Press, Louisville, Kentucky, 2009, page 119). In all fairness to pigs, they are not necessarily the worst of God’s creatures.

After all they play a vital and significant role in our lūʻau each year. While some may not want to be caught dead near pigs, our lūʻau required that they be very dead.

Whatever we may say about pigs, the younger son manages to come to his senses and decides he is meant to be a part of his father’s life. He recognizes that were it not for his father, he would not exist.

So he decides to return home to his father. Anxious about how his father may respond, he prepares himself to say to him, “Father, I have sinned against heaven and before you; I am no longer worthy to be called your son; treat me like one of your hired hands” (Luke 15:18-19).

His father refuses his plea. Instead he offers his son the finest of his robes, puts a ring on his finger and sandals on his feet and kills the fatted calf for a celebration of his return, all to the anger and consternation of the older brother.

What makes the parable of the prodigal son relevant is that it helps us to appreciate, more fully, our own families. We are the branches of the trunk of our family trees.

I know that Jesus would have understood our kūpuna or ancestors when they said: “I ulu no ka lālā i ke kumu. The branches grow from the trunk of the tree.” After all, he said something similar, “I am the vine, you are the branches. Those who abide in me and I in them bear much fruit” (John 15:5).

“As the Father has loved me, so I have loved you; abide in my love. I have said these things to you so that my joy may be in you and that your joy may be complete.” (John 15:9, 11)

It is a joy that the father of the prodigal son felt when he saw his son far off in the distance. He did not wait for him or walk to him. Instead, he ran and put his arms around him and kissed him.

The parable of the prodigal son is a story about returning “home” to relationships once broken with God, with one another, with family, even within ourselves. Here in this place, here in Mākena we lay claim to our faith in Jesus Christ.

He is the vine and we are the branches. He is our kūpuna. He is our ancestor. Without him, none of us would be here. Amen. 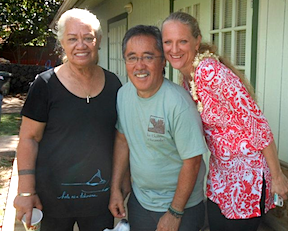