She was young at the time. She moved to Maui with her partner. They later became engaged and were married here in this church and for a few years Maui was their home.

But their work and careers eventually took them back to the Midwest. In time they would welcome the birth of their son and a few years later their daughter. As the children grew up they would make an annual pilgrimage to Maui and it was during that time that we met. Since then both of the children have graduated from high school and are now in college.

I thought about her this week. Their visits to Maui have now become less frequent – every other year or so. She was and is the kind of person who would cry two or three days before leaving tropical Maui for the continental climate of the Midwest. 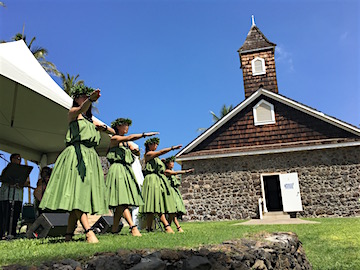 I’ve often wondered what would cause someone to be so deeply affected by our islands. Clearly, there are many who come and go without much ado. “Well, it was a nice vacation. It’s time to go home and back to work.”

For others, like her, the visits were always a time of deep transformation. She came to Maui as a malihini, a newcomer, but she left as a kamaʻāina – a child of this land. In a way, some will say such a transformation is not possible.

A kamaʻāina is one who is literally born on this ʻāina, on this land. From time to time you will hear someone talk about a change of heart – that someone may not be Hawaiian by koko or blood but “Hawaiian at heart.” However, any effort to explain such a change still falls short of what happens to those who are profoundly transformed when they set foot this land.

It occurred to me that that effort to explain how such a transformation is possible is what Jesus sought to explain to a Pharisee named Nicodemus. Our reading from The Gospel According to John reflects the image of light and darkness.

Nicodemus comes to Jesus by night. He emerges for a brief moment out of the darkness, seeking light from the teacher he believes has been sent from God. (Feasting on the Word, Year A, Volume 2, Bartlett & Taylor, Westminster/John Knox Press, Louisville, Kentucky, 2010, page 68) More often than not, “he hovers on the margins and in the shadows of John’s story. He is neither the first in the church nor the last to follow Jesus from afar. No doubt it was difficult, perhaps even dangerous, for Nicodemus to follow Jesus publicly, during the bright light of the day. He was, after all, someone who was part of the Jewish establishment, for whom Jesus seemed to be at first only a nuisance but later a political problem and threat.”

“Nicodemus had to be cautious and to exercise discretion. He was the forerunner of many of Jesus’ disciples who have had to be careful about when and where they practiced their discipleship.” (Op. cit., page 70)

Nicodemus represents a faith based on signs and he acknowledges that what Jesus has been doing cannot be done apart from the presence of God. (John 3:2) Jesus declares to him that it is God who loves and gives life to the world. From beginning to end, the subject of the text in our reading is God.

In Jesus’ encounter with Nicodemus there is misunderstanding but there is also the mystery of God. There is a hidden meaning to what Jesus says to Nicodemus. For example, bread, light, water, temple and other terms all carry two meanings.

When Jesus tells Nicodemus that life in the kingdom of God comes by birth “from above” (John 3:3), Nicodemus misunderstands him and essentially translates “from above” as “again.” He is confused and wonders how it is that an old man can be born again.

It would seem to me there is also misunderstanding and mystery in what it means when we say someone is a malihini, a newcomer - and someone is a kamaʻāina, a child born of this land. The misunderstanding comes when the terms are used interchangeably. The mystery comes when we realize that one can become the other because ultimately it is God who gives life to the world.

It is God’s aloha, God’s love that gave birth to these islands and that love, that aloha is available to all and when it is received, malihini and kamaʻāina become one. It is that aloha we share with the world as we welcome malihini to our shores.

I realize there are Christians who think otherwise. The Rev. Franklin Graham, son of the late American evangelist the Rev. Dr. Billy Graham, was quoted in early January saying: “It’s not a biblical command for the country to let everyone in who wants to come, that’s not a Bible issue.” (Christian Century, March 1, 2017, page 9)

A recent Pew Research Center Survey asked the question of Americans in the U.S. and more specifically of Christians: Is the United States responsible for accepting Syrian refugees? Overall, 54% of the Americans said “No.”

Among Roman Catholics 57% said “No, the U.S. is not responsible for accepting Syrian refugees? Among Mainline Protestant Christians 65% said “No” and 67% of Evangelical Christians said “No.” Another Pew Research Center Survey several years ago estimated that 78% of those survey across the U.S. identified themselves as Christians.

Clearly, American Christians seem to agree with Franklin Graham’s assertion that welcoming immigrants and refugees is not “a Bible issue” or we are reading and understanding the Bible differently. We only need to look at the healing of Naaman, the commander of the army of the king of Aram. It was through a young girl who was held captive from the land of Israel that Naaman learned of the prophet Elisha, a prophet in Samaria, who would be able to cure him of his leprosy. (2 Kings 5:1-14)

Centuries later, it was Jesus who reminded those who were in the synagogue on the Sabbath day of a biblical truth: “ . . . there were many widows in Israel in the time of Elijah, when the heaven was shut up three years and six months, and there was a severe famine over all the land; yet Elijah was sent to none of them except to a widow at Zarephath in Sidon. There were also many lepers in Israel in the time of the prophet Elisha, and none of them was cleansed except Naaman the Syrian.”

“When they heard this, all in the synagogue were filled with rage. They got up, drove him out of the town and led him to the brow of the hill on which their town was built, so that they might hurl him off the cliff. But he passed through the midst of them and went on his way.” (Luke 4:16-30)

I know there are many who feel threatened by what we see happening in the world. To welcome someone like the widow at Zarephath or a widow from El Salvador; to welcome someone like Naaman the Syrian or Omran Daqneesh, the 5-year-old Syrian boy who was wounded when his home was destroyed by a bomb in Aleppo, may cause some to be filled with the same kind of anger and rage leveled against Jesus that day in the synagogue long ago.

We can only hope we will have the courage to speak the truth of what the Bible teaches us. We are always to welcome the stranger.

Jesus reminds us, “What is born of flesh is flesh, and what is born of the Spirit is spirit.” (John 3:6) So it is that what is malihini may be malihini and what is kamaʻāina may be kamaʻāina, but what is aloha is Spirit –and that is what binds us to one another and to this land whether we are malihini or kamaʻāina.

Thankfully, no matter how hard some may try to turn aloha into a commodity for marketing purposes for the visitor industry, we are aware that the Spirit of aloha is like “the wind. The wind blows where it chooses, and you hear the sound of it, but you do not know where it comes from and where it goes.” (John 3:8) So it is with everyone who is born of the Spirit, who is born of the aloha of a God who so loved the world – not simply the U.S. but the world including Iran, Somalia, Sudan, Yemen, Libya and yes, Syria – that anyone who believes in him will not perish but have eternal life.