It was late Friday. The day was coming to an end after a flurry of activities that began earlier that morning. 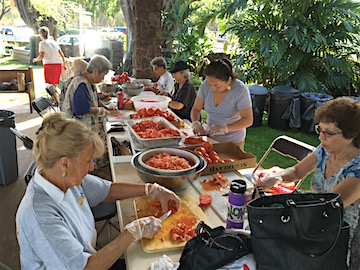 Nick and Anita had the run of the kitchen making the haupia for our annual lūʻau. Volunteers gathered at tables in our pavilion to chop their way through 90 pounds of tomatoes and much, much more.

Auntie Norma Lei and Cindy had their crew preparing the outdoor and table decorations. Uncle Fred and others went to work setting up tables and chairs. Scott and his crew kept busy putting up several tents and Daisy and Colleen were hard at work dusting and polishing all of the pews.

As the lunch hour approached, those who were pau with their tasks and others needing a break enjoyed the chili and rice prepared by Anne and Donna. By early afternoon, most of the preparation work was done.

Erma stayed until the last polo shirt was folded and Earlene grated her way through dozens of boiled eggs. With Earlene’s help, Ann took to putting the tomatoes and onions for the lomilomi salmon in equal portions into zip lock bags.

Kaʻōnohi was busy washing and cooking the rice, then setting the rice into serving trays. Kiko, my dog, was out in the yard standing guard and Makoa, Ann’s grandson was with us doing his share of work.

Soon it was time for Ann and Makoa to leave. I told Kaʻōnohi that I would wait until she was pau and so it was that I had time to do a few more things.

Before Ann and Makoa went out the door, I gave Makoa a hug and realized he had spent time most of the day with his grandpa Paul getting the kalua pig ready.

Ann nodded and acknowledged the same.

The scent of kīawe smoke rose from the top of his head and lingered in the room long after they were gone. I thought about what had transpired throughout the day.

There were no complaints except for the occasional moans and groans from some of us who recalled how much easier it was to do the work twenty-five years ago.

Still with all of the aches and pains, there was never any doubt that we were going to welcome family members, friends, and visitors to our home, here in Mākena, to share in a feast, in an extravagant celebration of Hawaiian music, food and dance.

Six days before another feast, Jesus returned to the home of Lazarus, whom he had raised from the dead. He was on his way to Jerusalem to celebrate the Feast of the Passover.

On the way he stopped in Bethany at the home of Lazarus. Lazarus along with Martha, Mary and others gave a dinner for him. (John 12:2)

Martha served the food and Lazarus was there at the table with Jesus along with others. It is said that Mary took a pound of costly perfume made of pure nard, anointed Jesus’ feet, and wiped them with her hair. (John 12:3)

The fragrance of the perfume quickly filled Lazarus’ home. (John 12:3) It is likely that everyone at the dinner table were keenly aware of the extravagance of Mary’s anointing.

But it was Judas who saw Mary’s anointing as a scandalous act. He asked Jesus, “Why was this perfume not sold for three hundred denarii and the money given to the poor?” (John 12:5) - aware that the amount represented at least a year’s worth of wages.

One would think that Jesus would have taken Judas’ question to heart. Buts he defends Mary. Jesus interprets Mary’s action by pointing out to Judas that she bought the perfume in anticipation of what was to come - “so that she might keep it for the day of my burial.” (John 12:7) He associates Mary’s anointing with his his entry into Jerusalem and his burial.

As for Judas’ question about the poor, Jesus’ response is very, very clear. His words come from a quotation from The Book of Deuteronomy: “For the poor will never ease out of the land; therefore I command you, you shall open wide your hand . . . to the needy and to the poor, in the land.” (Deuteronomy 12:11)

We could say much more about Jesus’ message in light of many across the U.S. who are anxious about their own economic security. Even as we worry about our own economic well-being Jesus’ command is unequivocal – “open wide your hand ... ”

Judas is preoccupied with money. Jesus is concerned not about money but about whether or not our hands and our hearts are open wide to the needy and the poor throughout the land. It will be through such open hands and open hearts that we will see our own lives and our world transformed as we “aloha kekahi i kekahi – love one another.”

That was the theme of our lūʻau yesterday. It will be through such aloha, such love that we will see our lives and our world transformed into something new.

H. Stephen Shoemaker, a Baptist minister, reminds us as we continue our journey through this season of Lent: “We live our lives in the shadow of the cross, but we also live in the presence of the risen Christ. So here is an invitation to daily companionship with Jesus, at the table, in extravagant acts of compassion and generosity, in moments of worship.” (Feasting on the Word: Preaching the Revised Common Lectionary, Year C, Volume 2, Bartlett & Taylor, Westminster/John Knox Press, Louisville, Kentucky, 2009, page 145)

I met woman at our lūʻau yesterday who spoke fondly about one of our kupuna or elders. “We grew up together on the island of Oʻahu,” she said. Having had to face her own health issues in recent years, she shared stories of her own life and memories of days long past. I could hear in her voice and see in her eyes the depth of her feelings for family and friends.

I imagine when Jesus walked into Lazarus’ home, Mary remembered all that had happened - how he came to them when Lazarus was sick and dying; how he wept and how Lazarus was healed. Mary said nothing, she simply acted “in the midst of a world of treachery and betrayal.” (Op. cit.)

Like Mary, we may wonder if we can believe in a good God when we see so much pain and suffering in our lives and in our world? “Can we trust that God will be faithful to us, even when God seems absent? . . . can we hope that God is still at work in our lives, creating a future for us where no future seems possible?” (Op. cit.)

In our reading from The Book of Isaiah, Isaiah shows us that God is a God of the future. “God is the one who brings hope out of desperation, day out of night, and joy out of mourning.”

As we walk the road to Jerusalem and beyond during this season of Lent, we would do well to remember the promise of the prophet Isaiah. “In the face of the terrible events of Jesus’ betrayal and crucifixion God not only will raise Jesus from the dead, but will raise us into new life as well.” (Ibid., page 126)

Let us pray: May God guide us through the desert places of our lives, may Christ lead us into knowing him more deeply, and may the Holy Spirit fill us with faith overflowing; that as we share in Christ’s suffering, we will also trust the power of his resurrection. “Aloha kekahi i kekahi.” Thanks be to God. Mahalo iā ʻoe e ke Akua. Amen.