“The Compassion of God”


More than 200,000 Syrians have died in the civil war that began four years ago. More than 4 million have fled Syria, most of them women and children. It is the largest exodus of refugees in recent history. 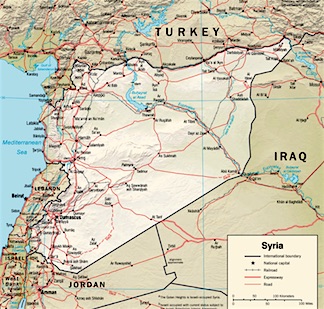 Another 7.6 million Syrians have been internally displaced within the country. According to a recent United Nations report, Syria’s education, health and social welfare systems have collapsed. It is estimated that 12.2 million Syrians are in need of humanitarian assistance, including 5.6 million children (Syria: The Story of the Conflict, BBC News Middle East, www.bbc.com, March 12, 2015).

The numbers are staggering. Late in the week I heard an interview with a Syrian woman that was heartbreaking. “No one has come to help us,” she said. “No one. We have nothing.”

Some have complained that the member nations of the UN Security Council have failed to respond and as a consequence the humanitarian crisis in Syria has become catastrophic. It is important that we remind ourselves that the displacement of people is no small matter especially in light of our reading from The Book of Numbers.

Scholars will want to us to consider the theological significance of the passage reminding us that the story of the poisonous serpents comes at the end of a series of “murmuring stories” (Feasting on the Word, Year B, Volume 2, Bartlett & Taylor, Westminster John Knox Press, 2008, page 98). Moses has led the once enslaved Israelites out of Egypt.

Yet it is said: “From the beginning the people grumbled and complained about their condition in the desert (Exodus 16:2-3). Their complaints are noted at several different points along the way (Numbers 11, 14, 16, 20) but come to a climax in Numbers 21.” Theologians insist: “The failure to trust God (and God’s intermediary, Moses) is the basic issue” (Ibid.)

Given the context of the departure from Egypt and the journey that followed, would any of us be so quick to condemn the Israelites for their complaints? Based other passages in the Bible, some scholars have concluded that the exodus from Egypt may have included as many as 2 million men, women, and children (Exodus 12:37; Numbers 1:46; Numbers 26:51).

That’s a lot of people. By some estimates if they were traveling in a column of four individuals abreast of one another, that column would stretch over 350 miles.

At our 24th annual lūʻau celebration yesterday, we fed 600 and while on restroom patrol, I calculated that 8 full rolls of toilet paper used in four hours. It was a perfect Mākena day – bright sun and blue skies, the occasional cloud cover and light trade winds.

The food was ono, the music and hula outstanding. Many who offered their kōkua did their share of work and more.

As far as I could tell there were no complaints. But then we were not fleeing the wrath of Egyptian warriors on chariots or ISIS militants with automatic assault weapons on the back of pick-up trucks.

It is not my intention to make light of Moses’ dilemma of wanting the people to move forward trusting that God would keep the commitment to lead them to a new land or to trivialize the trauma of those bent on inflicting terror.. But to a person – all 2 million of them – the Israelites were all refugees fleeing an army of advancing warriors. That they would apparently lapsed into not trusting God is not surprising.

I imagine for the more than 52 million refugees in the world today, some would ascribe the suffering of so many as God’s punishment in the same way that the suffering and death brought upon the Israelites was God’s punishment. What makes the reading from Numbers interesting to me is that when the people complain that they have no food or water, “the Lord sent the poisonous serpents among the people” (Numbers 21:5-6) as a punishment for speaking out.

Many were bitten. Many died.

It is also interesting that when the people call on Moses to have “the Lord take away the serpents” there is no indication that that was done. I am not so sure that God sent the poisonous serpents to punish and kill the people. The snakes were already there in the wilderness. That the people would find themselves in harm’s way was all but inevitable.

What becomes apparent is the bronze serpent becomes a symbol of God’s power to save and to heal. Our reading from The Gospel According to John “draws on the image of the bronze serpent that brought healing to those whom had been bitten in the wilderness.” (Seasons of the Spirit, SeasonsFUSION, Lent, Easter, 2015, Wood Lake Publishing, 2014, page 74).

“And just as Moses lifted up the serpent in the wilderness, so must the Son of Man be lifted up, that whoever believes in him may have eternal life” (John 3:14). In both of our readings the power to save and to heal comes not from God’s condemnation, but from God’s grace.

Our reading from John contains the familiar passage we all memorized growing up in Sunday School: “For God so loved the world that he (sic) his only Son, so that everyone who believes in him may not perish but may have eternal life” (John 3:16).

It is a time for us to turn away and to look up!

Over the years, what I have come to appreciate about John 3:16 is the proclamation that “God so loved the world” – not just human beings – but the world. I would venture to say it is a love we understand because of our love for the world we know as Hawaiʻi.

Near the close of our lūʻau yesterday Uluwehi Guerrero sang a song written by Frank Kawaikapuokalani Hewett entitled “Aloha Hawaiʻi Kuʻu One Hānau.” The women danced. Whether we are malihini or kamaʻāina, we understand this aloha as the compassion of God.

Love to Hawaiʻi, sands of my birth
From verdant Hawaiʻi
To the sands of Niʻihau
You are a string of pearls
An adornment for the heavens
May our people
Dwell in peace

For God’s love for the world – for you, for me, for all people, for Hawaiʻi and every corner of the world - we give thanks for God’s power to heal and save us all. Amen.