It was not too long ago that Pope Francis said the line which separates good from evil is found in the human heart. The outside world, he asserted, is not what “makes us saints or not saints, rather it is the heart that expresses our intentions, our choices and the desire to do everything for God’s love” (Catholic News Service, August 31, 2015).

Pope Francis drew his conclusion from his reading of The Gospel According to Mark (7:1-23) in which Jesus criticized hypocrites who honor God “with their lips” but not with their hearts. Jesus said to crowd that had gathered in Jerusalem centuries ago, “Listen to me, all of you, and understand: there is nothing outside a person that by going in can defile, but the things that come out are what defile” (Mark 7:14).

In his reflections, Pope Francis added, “The boundary between good and evil does not lie outside of us, but rather inside us. Without a purified heart one can never have hands that are truly clean and lips that speak sincere words of love” (Op. cit.)

Whether or not anyone would take issue with the Pope, it’s clear from the words of the prophet Jeremiah that there is a side to the human heart that is troubling. The word that came to Jeremiah was this: “Thus says the Lord, ‘The heart is devious above all else; it is perverse – who can understand it? I the Lord test the mind and search the heart, to give to all according their ways, according to the fruit of their doings.’” (Jeremiah 17:9-10).

Much has been written in literature about the human heart. In Heart of Darkness (1899), Polish-British novelist Joseph Conrad raised questions about imperialism and racism. In later years some, like Nigerian novelist Chinua Achebe, roundly criticized Conrad’s novella as “an offensive and deplorable book” that dehumanized Africans. Other African scholars including Rino Zhuwarara of Zimbabwe and Peter Mwikisa of Botswana were equally critical of the book.

But in some ways, their criticism of Conrad only highlights his overall view of human nature in Heart of Darkness through its characters, both European and African. Regardless of who the characters are, Conrad gives us a negative impression of human nature.

It was a negative impression that was not lost on British author William Golding. Golding received the Nobel Prize for Literature in 1983 for his book Lord of the Flies (1954). It has been said that the book exemplifies our capacity for evil, an evil that is inherent in human nature, an evil that is an inborn trait in humankind (William Golding’s Lord of the Flies: Man’s Capacity for Evil, Teen Ink, Orlando, Florida, Kenzie Treub, November 27, 2012).

It was also an impression that was not lost on Russian historian Aleksandr Solzhenitsyn. The Gulag Archipelago was written between 1958 and 1968 and published in the West in 1973. The narrative for the book relies on eyewitness testimony and primary research material of those who were prisoners in the gulag labor camps.

It was Solzhenitsyn who said “ . . .the line separating good and evil passes not through states, nor between classes, nor between political parties either – but right through every human heart and through all human hearts. The line shifts. Inside us, it oscillates with the years. And even within hearts overwhelmed by evil, one small bridgehead of good is retained.”

Could it be that that one small bridgehead of good is what the prophet Jeremiah concluded as the people of Judah faced a crisis of their own in 587 BCE? Our reading from The Book of Jeremiah comes following the destruction of the Temple in Jerusalem and the end of the Davidic line of kings. The people of Judah lost their power and prestige, freedom and security and the assurance of God’s faithfulness (Feasting on the Word, Year B, Volume 2, Bartlett & Taylor, Westminster/John Knox Press, Louisville, Kentucky, 2008, page 122).

But Jeremiah maintained that God’s faithfulness remained, even in the midst of their exile. Jeremiah offered words of hope despite their “infidelity, despite corrupt kings and priests, despite injustice and exploitation, despite idolatry, despite all the ways the people have broken faith with God – God will not break faith with them” (Ibid., page 124)

The Rev. Dr. Richard Floyd, Senior Associate Pastor, at Trinity Presbyterian Church in Atlanta, Georgia reminds us: “No longer will the law be engraved in stone and displayed in rotundas for all to see but none to follow. The days are surely coming when the law will be engraved in the people’s heart and displayed in their lives.”

“No longer will people know about God – all the right words, all the right theology. The days are surely coming when people, from the least to the greatest, will know God – with all the intimacy that word entails. God will wash away the people’s sins once and for all and remember them no more” (Op. cit.).

Jeremiah proclaimed, “Thus says the Lord, “I will put my law within them, and I will write it on their hearts; and I will be their God, and they shall be my people” (Jeremiah 31:33).

It may be that Conrad, Golding and Solzhenitsyn heard Jeremiah’s earlier judgment when he proclaimed: “Thus says the Lord, ‘The heart is devious above all else; it is perverse – who can understand it?’” (Jeremiah 17:9).

But it was Solzhenitsyn who also wrote : “ . . . the line dividing good and evil cuts through the heart of every human being . . . who is willing to destroy a piece of his [or her] own heart?” (From The Gulag Archipelago, Aleksandr Solzhenitsyn, 1956). Perhaps in searching out the human heart, God knew then and God knows now that there is bridgehead of good in every human being. It is on the bridgehead of the human heart that that the law of love will be written.

At the conclusion of the Angelus or prayer commemorating the Incarnation of Jesus and paying homage to Mary’s role in salvation history, Pope Francis asked that everyone pray to receive “a pure heart, free from every hypocrisy” so that as Christians we may “live according to the spirit of the law and achieve its end, which is love” (Radio Vaticana, July 23, 2017).

Last Sunday we wrestled with the machinations of theologians about God’s love for the kosmos and whether or not salvation or the healing of the kosmos or world was meant only for human beings. This morning, we find ourselves wrestling with whether or not the human heart is inherently evil.

There is no doubt that we could point to examples of the many, many ways in which we would conclude that the human heart is indeed evil, but if our prayers for a clean heart have any power, it will be in the power to love. – the power to love in the midst of overwhelming fear and hatred, pain and suffering – and there are many, many examples to which we may also point. Jillian and Robin Ridington returned to Victoria, British Columbia, Canada last week after spending the early winter months with us here on Maui. 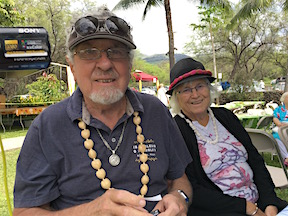 We received an email from them yesterday letting us know that they received sad news from their son about his 6 year-old daughter Ursula. Since her birth and when she was diagnosed with cancer, we have held Ursula in our prayers. After a visit to the British Columbia Children’s Hospital in Vancouver, Canada, their son shared the following:

“We arrived at BC Children’s late on the afternoon of Thursday the 15th after traveling all day by car and ferry. This morning we took Ursula in for a non-sedated MRI. I went into the MRI room with her and held her leg while they did a full 45-minutes scan of her head and spine. She did really well, lying still for that long, holding her stuffy, wrapped up in her kitty blanket.

Directly afterwards we met with her oncologist, her clinical nurses from BC Children’s Hospital and Canuck Place, and her neurosurgeon. The tumor has grown significantly since last June. The brain around the tumor shows swelling and stress, the tumor has extended tendrils into her brain and likely into her brain stem.

Her ventricles are significantly enlarged. Her recent symptoms – swollen right eye, lack of balance, headaches, nausea, etc. – are all due to this enlarged tumor and to the location of the tumor, which is inhibiting the flow of cerebral spinal fluid from the brain to the spine. The tumor is approximately 3 centimeters by 3 centimeters large (about an inch wide). It is much, much larger than on previous occasions.

Due to the location of the tumor and the fact that most of the damage is being done by parts of the tumor which are in accessible by surgery without causing severe damage or paralysis, surgery is not an option. Having done surgery twice before, plus chemotherapy and radiation therapy, plus many forms of alternative therapy – there are really no further treatment options available for Ursula.

We wanted to get together with her team to see if there were any further treatment options available to her, and we wanted to have a few decisions in place now, when she is not at the worst of things.

Even though Ursula is becoming quite severely disabled by this disease, her quality of life has been high, and she is surrounded by people who love her and care for her. We will go home with her tomorrow.

We will give her the love and the surrounding light that she needs. We do not have a lot of time left; but what time we do have we will make the very best of. There is really nothing else to say. Our hearts are breaking.”