As a child growing up in Kona on the island of Hawaiʻi, I looked forward to the annual Christmas parade through Kainaliu town in December and the annual King Kamehameha Day floral parade through Kailua village in June. Each year the local businesses in Kainaliu would get together and cover the costs for stringing Christmas lights across the street from one end of the town to the other.

As city blocks go it was probably barely a block long but that was good enough for me. I don’t remember any marching bands or who the marching units were for the five minutes it took to get through the parade route. What I do remember is what came at the end.

There high above the ground on what seemed to be an enormous red fire truck was Santa Claus. I must admit the first time I saw a red-suited, white- bearded Santa Claus it terrified me. Despite my fear, I came to learn very quickly that Santa’s helpers were prepared to toss a lot of free candy to the crowds that had gathered along the sidewalks.

It was an even more colorful event than the Christmas lights in Kainaliu. There were floats covered with flowers and other plants – red, yellow, white, pink, orange, purple and green. 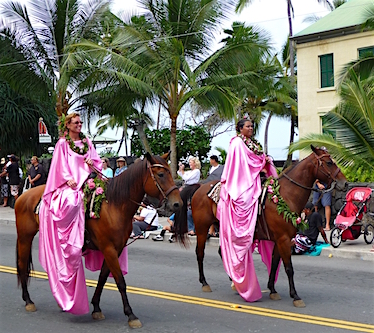 Some of the floats featured musicians and singers and dancers. And then there were the pāʻū riders, women dressed in the colors and flowers for each island – from Hawaiʻi island to Niʻihau, including Kahoʻolawe. They were the princesses of the parade accompanied by other women and men on horseback.

As a child, I was fascinated but also terrified of the horses. They seemed loom even larger than the fire truck at the Christmas parade and whenever a horse grew stubborn or when it was frightened by an unexpected sound or distraction, I felt grateful that there were others on horseback who knew enough about how to calm a horse down.

As I look back over the years I know now that both parades were about two kings. Santa Claus notwithstanding, I knew enough about Christmas that it was a celebration of the birth of a child king who would establish a kingdom on earth. I also knew enough about Kamehameha to know that he was the aliʻi, the warrior king who brought the islands of Hawaiʻi into one lahui or nation.

For me, the annual Christmas parade and the Kamehameha Day parade were filled with exciting sights and sounds and colors. But there were also moments of unease and fear.

What if Santa Claus decided to get off the fire truck and walk along the parade route to shake our hands? Why is he so big and so loud? What did “Ho! Ho! Ho!” mean anyway?

What if the horses the pāʻū riders were on decided to buck and run into the crowd? Why the occasional neighing and snorting? And what if – and this could only occur in the mind of a little boy who noticed the hard-working pooper scoopers – what if a horse decided to poop in front of us? These were all seemingly important questions at the time.

I am almost certain there was at least one little boy along the roadside as Jesus rode towards Jerusalem on the back of borrowed donkey’s colt who thought about such questions. As Jesus rode along, people kept spreading their cloaks on the road. What a strange sight it must have been. Why would they do such a thing? Why all the excitement?

Today is Palm Sunday. It is also Passion Sunday in recognition of the beginning of Holy Week and Jesus’ final journey to Jerusalem. We know that pain and suffering await him in Jerusalem but for today there is only celebration.

It is a bit of irony that in our reading from The Gospel According to Luke that Luke makes no mention of palm branches. Instead, we are told that the people laid down their cloaks.

In Near East tradition, the palm branch was a symbol of triumph and victory (Leviticus 23:40; Revelation 7:9). For Luke, it was not palm branches but the spreading of cloaks upon the ground that announced the arrival of a king.

As Jesus approached the path down from the Mount of Olives, the disciples and others began to praise God joyfully for all the deeds of power they had seen. “Blessed is the king who comes in the name of the Lord!” they cried out. “Peace in heaven, and glory in the highest heaven” (Luke 19:37-38).

Adam Walker Cleaveland is a pastor of the United Methodist Church. He writes about the response of the people to Jesus’ entry into the city this way: “On that day as Jesus was preparing to enter the city, throngs of people were waiting. They heard word of this amazing teacher, this powerful man coming to the city, and it’s easy to understand why they might have been so filled with hopes and desires. It’s easy to understand why they were hoping for the coming of the Messiah, a military king who would ride into town on a stallion prepared for battle. A true . . . mighty king who would bring soldiers with him, someone who would be prepared and able to defeat the despised Romans.”

It makes sense that they became quickly disappointed in Jesus. In some ways, we are no different than those who were standing along the roadside on that day long, long ago.

We want leaders who will give us what we want; who will serve our needs and not the needs of others. We want leaders who understand the only way to achieve peace is through military strength – even if that means millions upon millions of men, women and children may suffer and die.

The Rev. Michael L. Lindvall, pastor of The Brick Presbyterian Church in New York City, offers us a contrasting view of what happened that day when Jesus entered Jerusalem. “There was no stallion for this Messiah, just a donkey on loan. There was no army for this Messiah, just a rag-tag assortment of unemployed fishermen, an errant tax collector, and some vaguely disreputable women. And this Messiah was no vanquisher of Romans; he was just a Galilean rabbi.”

As we begin Holy Week, can we see what Jesus saw – the suffering of others in the world? If we were to look around us, what are some of the ways that others are crucified today? And what is our response?

Over two decades ago, two synagogues in Istanbul, Turkey were destroyed by truck bombs in a coordinated attack. At least 24 people were killed and over 350 others injured. Some of the news reports attributed the attack to Al Qaeda.

Tragically, although the attack was meant to inflict pain and suffering for Jews who were gathering for their Sabbath, most of victims were Turkish bystanders. Of the 24 who were killed, 14 were identified as Muslims. In the aftermath of 9/11, we have been overwhelmed by more than 40 wars and armed conflicts that have devastated millions around the world.

But how to achieve such peace remains elusive. Carter recalls his father, a military contractor, saying to him one day: “. . . we will never have peace on earth until we can quiet the wars within our own hearts” (Ibid., page 156).

He goes on to say some of the things that Lindvall said: “Jesus rides no high horse, just a lowly colt. He chooses to enter a deadly situation without force or protection. He gives himself freely and without reservation. This a prophetic act, a sign of God’s vulnerable love, which risks everything and promises to gain all.” Then he adds, “This is the means by which God creates peace.”

So it is that we must quiet the wars of anger and bitterness, hatred and vengeance that we hold within our hearts and that we harbor towards others. There are those who believe that Jesus was indeed a prophet. There are others who are convinced that he was a fool.

Whether prophet or fool, H. Stephen Shoemaker, a Baptist minister, reminds us: “Every day, as Jesus taught in the temple, religious leaders kept trying to find a way to kill him, but the people who heard him were spellbound. The crowds that sang and waved palms and laid their garments are still with him, still part of the kingdom movement Jesus brought. Even us.” (Ibid., page 157)

Let us be glad then and give thanks to God.

In his letter to the church in Philippi, the Apostle Paul writes: “If then there is any encouragement in Christ, any consolation in love, any sharing in the Spirit, any compassion and sympathy, make my joy complete: be of the same mind, having the same love, being in full accord and of one mind. Do nothing from selfish ambition or conceit, but in humility regard others as better than yourselves. Let each of you look not to your own interests, but to the interests of others. Let the same mind be in you that was in Christ Jesus” (Philippians 1:1-5).

I can almost hear the Apostle Paul adding: “I am Paul of Tarsus and I approve this message.”