The movie Divergent is based on a young adult novel by Veronica Roth. It opened this week in theaters across the U.S.

It is the story of a future world where young adults are divided in to five distinct factions based on human virtues including: Abnegation – setting aside of self-interest for the sake of others or for a belief or principle; Amity – having goodwill; Dauntless – showing fearlessness and determination; Candor – having a quality of being open and honest in expression; and Erudite – having or showing great knowledge or learning. 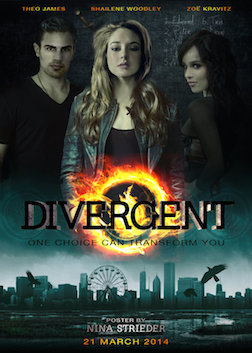 As teenagers come of age, they are tested to determine which faction will be best for them – the one in which they were born or a different one. In a scene from the movie, young women and men are addressed by a leader: “Today you will take a test that will help you discover who you truly are. The future belongs to those who know where they belong.”

The test does not work for one young woman. At what is referred to as the Choosing Ceremony, she discovers that she does not fit in any one faction. In fact she belongs to all five and is therefore considered “divergent” and a threat to the social system.

What follows is her struggle to find her place. The message of the film to young adults is: “You’re you, and nobody else. Don’t let others define you. Don’t let others put you into one of their neat little slots. You are unique.” (ʻDivergentʻ doesn’t diverge enough, Jocelyn Noveck, The Maui News, Friday, March 21, 2014, D1)

Divergent is the first of three installments based on Roth’s trilogy. It is likely that the film will be the next young adult blockbuster based on the sale of over 11 million books when it was published in 2011.

To suggest that the premise of the film is applicable to our reading from The Gospel According to John (John 4:5-42) may seem a bit of a stretch. But I could not help but think about the encounter between Jesus and the Samaritan woman at the well.

In the film the five factions are meant to define the identity of a young woman. In our reading from the Bible, there are five “factions” that seem to define the identity of a Samaritan woman: her gender, ethnicity, marital status, class, and religion. In the eyes of the writer, she is a nobody. “She does not even merit a name, and her gender, religious orientation, social standing and personal habits distance her from Jesus and her community.” (Feasting on the Word, Year A, Volume 2, Bartlett & Taylor, Westminster/John Knox Press, Louisville, Kentucky, 2010 page 94)

It is on a journey from Judea to Galilee that Jesus finds himself traveling through Samaria. In the city of Sychar he meets a Samaritan woman at Jacob’s well in the middle of the day.

Their encounter with each other becomes an immediate source of distress for the woman. She questions Jesus wondering how it was that he, a Jew, would ask her, a Samaritan for drink of water knowing he is aware that Jews do not share things in common with Samaritans.

The encounter becomes especially awkward for the woman because it occurs in the light of day – at noon. The Samaritan woman was well aware of her place in the world.

Instead, he said, “If you knew the gift of God and who it is that is saying to you, ‘Give me a drink,’ you would have asked him, and he would have given you living water.” (John 4:11) “He asked his question to provoke the response he knew would come” from the woman. A Jew does not ask a Samaritan for water and a Samaritan would not feel obliged to do so. Yet Jesus asked and in his asking we see God’s desire to break down all of the divisions that we create.

Much may be made of the fact that the Samaritan woman came to believe Jesus was the Messiah because of what he said to her, “I am he, the one who is speaking to you.” (John 4:26) Or of how Jesus told her everything she had ever done. (John 4:29)

I would contend that she as well as the other Samaritans from that city believed in him not because of what he said but because of he did. I have said this in the past that everything about the Samaritan woman was wrong, wrong, wrong according to the society in which she lived.

Wrong gender, wrong ethnicity, wrong class, wrong religion, wrong marital status. By simply saying to her, “Give me a drink,” Jesus changed her life forever. He stopped at the well and talked with her. He did not judge her for having been married five times. He did not judge her because her ancestors worshiped on a mountain and not in Jerusalem. He simply asked for a drink of water. He told her everything she ever did and loved her anyway; that is what saved her life.

Jesus saw beyond the factions and divisions. It was as though he were saying to the Samaritan woman: “You are you, and nobody else. Do not let others define you. Do not let others put you into one of their slots. You are unique – you are loved.” As we look about our lives and our world, may we also see beyond the factions and divisions to the common life we share as children of God and as brothers and sisters to one another.