Families opened their homes to the hundreds of thousands of people who made their way to Washington D.C. yesterday for the March for Our Lives and the demand to bring an end to gun violence not only in schools but in businesses and churches and on the streets of cities across the country and around the world. The logistics for organizing the march on Washington were monumental. 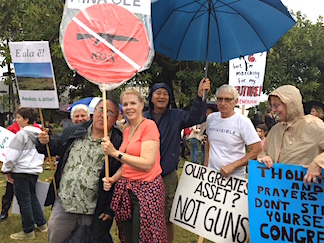 Many area residents provided their kōkua or help with housing. Businesses offered free food while others provided free transportation. The city prepared for an anticipated crowd of 500,000 with law enforcement personnel providing security and the mundane task of providing thousands of porta-potties.

The speakers at the rally in Washington D.C. were all middle school and high school students. No adults. And in over 800 other marches in the U.S. and around the world, it was primarily the students who were up at the podiums.

Mahalo Ke Akua. Thank God, it was the students.

What did some of the naysayers – some of the adults “in the room” - have to say of the students who spoke yesterday? Hours after the marches began, someone wrote online, “Today’s protests aren’t spontaneous. Gun-hating billionaires and Hollywood elites are manipulating and exploiting children as part of their plan to destroy the Second Amendment and strip us of our right to defend ourselves and our loved ones” (Facebook, National Rifle Association).

After the shooting at Marjory Stoneman Douglas High School in Parkland, Florida I knew that if there was a March for Our Lives here on Maui I would be compelled to show up and demonstrate my own personal support for our ‘ōpio – for our young people. The drive from Mākena to Kahului yesterday was easy enough. If I had any concern about the event, it was about the cloud-filled skies that continued to bring rain across the entire island.

Would anyone show up, I wondered? Well, they did. I can’t tell you how many were there but there were a lot more folks than I expected and many familiar faces. This morning, The Maui News reported close to 1,000 people made it to the event.

A couple of adults spoke but the primary speakers were students. There was an LGBTQ youth from King Kekaulike High School and another youth from Haleakalā Waldorf School. I looked around and noticed many parents with babies and young children. I saw an elderly couple holding a sign that read, “I am here for my grandkids.”

There was a 10-year-old boy walking through the crowd with a placard calling on those over 16 years of age to register to vote. Nearby I saw a baby in a stroller. Although the rain had caused the ink to run on his sign, enough of the wording remained. It simply said, “I gave up my nap to be here.”

Whether in Washington D.C. or Kahului or other towns and cities across the U.S. and around the world, the preparation and purpose of the gatherings required the attention of youth and the assistance of adults. That kind of preparation and a sense of purpose was not lost on Jesus the day he entered the city of Jerusalem for the Feast of the Passover.

Thousands of pilgrims made their way to the city from outlying areas. The city became crowded with people. Some say the population of Jerusalem swelled to over 125,000.

As Jesus and the disciples made their way to the city, he sent two of the disciples to a village along the way to find a colt and bring the colt back to him. When they returned with the colt, they put their cloaks on it and Jesus sat on the colt.

People spread their own cloaks on the road while others spread leafy branches that they had cut from the fields. Jesus’ preparation for his entry into the city may seem inconsequential to us today, but for those who were finding their way to the celebration of the Feast of the Passover, Jesus’ decision to ride to the walls of city was a way to invite acclaim.

The preparations had been made. The celebration of his arrival occurred near the city but not in the city. Jesus was keenly aware that once he entered Jerusalem, it would be for the last time. This was the road to his death (Feasting on the Word, Year B, Volume 2, Bartlett & Taylor, Westminster/John Knox Press, Louisville, Kentucky, 2008, page 152).

On at least three previous occasions he tried to tell the disciples that he knew he was going to be rejected, delivered into the hands of his enemies, be condemned to death and yet to rise again (Mark 8:31-32, 9:30-32; 10:32-34). But they were not able to hear and to understand what he was saying. However, he was clear about the purpose of his final journey to Jerusalem. Jesus saw that through his death there would come a resurrection.

I would say to you that the young people who found their way to Washington D.C. yesterday took the time to prepare for the march and they were clear about their purpose. The change they sought had already come and was coming.

Alex Wind, one of the students of Marjory Stoneman Douglas High School who spoke in Washington D.C. boldly said that those who refuse to enact sensible gun legislation to end gun violence have chosen death. The change did not come after Columbine or after Sandy Hook. The change did not come after thousands died as a result of gun violence in the homes, churches and streets of our towns and cities over the last twenty years.

But the change has come in our young people, with or without the adults “in the room.” In the words of Alex, “We choose life.”

The triumphal entry of Jesus into the city of Jerusalem happened outside the city gates. Within a week of his acclaim, his detractors mocked him and his accusers humiliated him.

Even before the gathering in Washington D.C., a clip was posted on YouTube two days prior to the march. Remember the adults “in the room”?

It appears an adult thought it clever to entitle the clip - “A march for their lies.” The host, or I should say the bully, said, “To all the kids from Parkland getting ready to use your First Amendment to attack everyone else’s Second Amendment at your march Saturday, I wish a hero like Blaine had been at Marjory Douglas High School last month. Because your classmates would still be alive and no one would know your names. And because the media would have completely and utterly ignored your story the way they ignored his” (NRA TV).

Unfortunately, officer Gaskill was not able to end it soon enough. Jaelynn died from her injuries last Thursday, March 22, 2018 not long after she was taken off of life-support. Yesterday, 100 students from Great Mills High School in St. Mary’s County, Maryland joined others on Pennsylvania Avenue. They could be heard saying, “We Are! Great Mills!”

By the end of the day, some were wondering if anything was achieved. The change in legislation may be a few years in coming. To the naysayers, to the adults “in the room” the youth are clear. They are the change – and they are here today

If this season of Lent that has brought us to this day has taught us anything, it is that we must take a long hard look at all aspect of our lives – in terms of our identity as disciples of Jesus Christ, our dreams for the future, and our view of the world – including gun violence. I know some may feel that any talk of gun violence is a political issue that has no place in the life of the church.

Peter W. Marty is the pastor of St Paul Lutheran Church in Davenport, Iowa would be the first acknowledge, as I do, that gun violence is a political issue. But that should not preclude us from engaging one another about the impact gun violence has on our lives. Marty points out, “The death-by-guns crisis in America is not just a political issue. It’s a spiritual issue of the highest order. Having all but enshrined the divinity of guns, our culture has created an elaborate public liturgy for every mass shooting. Flags go to half-staff. Counselors turn out. Thoughts and prayers pour forth.”

“We continue to make a sorry mess of the distinction between loving God and being charmed by idols that seek to thwart the glory of God. Our national infatuation with firearms has reached crisis proportions that should trouble every believer.”

He goes on to say, “We’re in golden calf country here, elevating a loyalty to the gun over a fidelity to God’s desire for abundant life. More than a hunting or safety device, the gun has become an object of reverence. We bow in devotion at its altar.”

“When a gun becomes an idol, it demands loyalty even if it regularly disappoints. Like other small g gods that offer false consolation, a gun’s guarantee of ultimate safety and security is a myth.”

“The Lord said to Moses, ‘they have cast for themselves an image of a calf, and have worshipped it and sacrificed to it . . . [and] the Lord sent a plague upon the people, because they made the calf.’”

It is in The Book of Deuteronomy that Moses declared to the people of God: “ . . . I have set before you life and death . . . choose life so that you and your descendants may live, loving and obeying your God and holding fast to God; for that means life to you and length of days . . . ” (Deuteronomy 30:15-20)

Our children are telling us, “Never again.” “Enough is enough.” “We choose life.”

Sawyer Garrity and Andrea Peña, two students at Marjory Stoneman Douglas High School collaborated on the lyrics and music of a piano ballad entitled, “Shine.” The ballad is a tribute to the 17 students and staff who died and 14 others who were injured in the shooting on Valentine’s Day, February 14, 2018.

The lyrics are addressed to the adults “in the room.”

You, you threw my city away.
You tore down the walls and opened up all the gates.
You, you ruined this town.
You burned down all of the bridges and you slowly let us drown.

We’re, we’re gonna stand tall.
Gonna raise up our voices so we’ll never ever fall.
We’re tired of hearing that we’re too young to ever make a change.

Chorus: Cuz, you’re not gonna knock us down.
We’ll get back up again.
You may have hurt us but I promise we’ll be stronger
And we’re not gonna let you win.
We’re putting up a fight.
You may have brought the dark
But together we will shine the light
And, whoa, we will be something special,
Whoa, we’re gonna shine.

We can hug a little tighter.
We can love a little more,
Laugh a little harder.
We can stand up and roar.
If we all come together it will be all right
Stand up for one another
And we’ll never give up the fight.

We will be something special.
We will shine!