I have a photograph of my maternal tūtūkane or grandfather in a picture frame at home that includes myself, an uncle, my cousin, and my grandfather’s sister. It was taken while we sat on wooden benches around our dinner table during a Christmas family gathering when I was 13 years old. 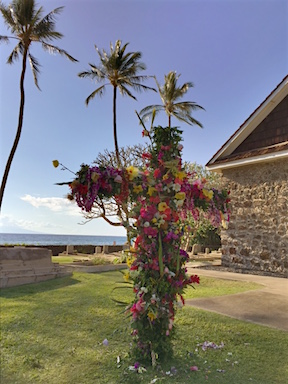 Over the course of the next year my tūtū’s health began to decline. He was diagnosed with cancer.

Although I had spent six years away at boarding school, commuting back and forth from Kailua, Kona to Honolulu, I was at home the day he died. Family members gathered a few days earlier. We were all made aware that tūtū’s remaining time with us was very short.

As he took his last breaths, a family member began to wail in a voice that pierced the air. It took me by surprise and though it frightened me for a moment, that fear quickly passed. Even then as a young teenager I was thankful that tūtū was no longer in pain; that he was no longer suffering.

If you ask other family members about they recalled that day, each would share their own account of what happened when he died. I know the details of what occurred would vary from person to person.

Following Jesus’ death, those who were close to him recalled what happened the day he died and more especially what happened the following day when the women returned to the tomb with spices to prepare his body for burial. The accounts recorded by Matthew, Mark, Luke and John vary in details.

Matthew (28:1-10) tells us that the women who went to the tomb included Mary Magdalene and Mary (28: 1). Mark tells us the same but adds that a woman named Salome also brought spices for the anointing of Jesus’ body (16:1).

What also varies is who the women saw in the tomb that first day of the week. In Matthew, “an angel of the Lord” appears (28:2-3) and there are an unspecified number of guards who are also present (28:4). In Mark, the women encounter “a young man” upon their arrival (16:5).

Luke records the appearance of “two men in dazzling clothes (24:4). In John’s account Mary Magdalene sees “two angels in white” (20:12). Remarkably she also sees Jesus but, at first, does not recognize him.

The linen wrappings are there in the tomb in Luke (24:12) and John (20:6) but there are no references to the cloths in Matthew and Mark. For those of us who have grown up in the church and taught that every word in the Bible is literally true, the details provided by Matthew, Mark, Luke and John seem to contradict one another.

Some may want to dismiss the stories altogether but I would contend the truth of what occurred that day is what matters. It doesn’t matter whether we know the names of all of the women who went to the tomb.

It doesn’t matter whether there was a young man or two men or an angel or two angels at the tomb. What matters is that the women were reminded: “Remember how he told you, while he was still in Galilee, that [he] must be handed over to sinners, and be crucified, and on the third day rise again. Then they remembered his words ... ” (Luke 24:6-7).

And it was and is the joy of the resurrection that has transformed and continues to transform the lives of men, women and children of every generation. The Rev. Shawnthea Monroe is the senior pastor at Plymouth Church – United Church of Christ in Shaker Heights, Ohio. Ohio is like a long way from Hawaiʻi.

While we may be separated by half an ocean and half a continent and a lifetime of different experiences, I share Kahu Monroe’s conviction when she writes: “As crazy as it sounds, I believe in the resurrection. I believe Jesus rose on the third day – even though I cannot prove it. We have no firsthand account of the event; no one witnessed the first gasp of breath or the shudder of limbs as the heart beat once more. No one was with Jesus when he shrugged off the linen cloth and stepped out of the tomb. No one saw it happen.” (Christian Century, March 16, 2016, page 22)

Were we to rely solely upon reason and science, the resurrection makes no sense. Yet, as Kahu Monroe points out, “Generation after generation, we make our way to the empty tomb” – as we have made our way to this place here in Mākena this morning – “and hear the words that rock our world: He is not here. He is risen.”

He is risen and he has become our joy.

He is the morning sun over Haleakalā. He is the rainbow after the rain is done. He lights our way, hears our fervent prayers, and where we go, we always know he is there.

He is our joy. He is our breath of spring. He is our truth. He is the song we sing.

He is our bright morning star and where we go, we always know he is there. He is our all, our joy and victory, our peace and power; our puʻuhonua, our dwelling place. All that we are is by and through his grace.

He is our joy, our cornerstone, our hope. In him alone, we rest. A lei pikake sweet with a fragrance that fills the air and where we go, we always know that our Lord is there.

Yes, he is all that and more. On a day such as this we easily say to one another, “Happy Easter.” But for me Easter is not about happiness, but about joy.

As Jesus gathered for a final supper with his disciples on the day prior to his death, he made clear that they were to live a life of service to others. True joy comes from living such a life of service.

We do nothing from selfish ambition or conceit, but in humility regard others as better then ourselves. We look not to our own interests, but the interests of others (Philippians 2:3-4).

Such a life of service is strengthened and sustained by the Lord of life, our living Lord. May we be like Mary Magdalene, Mary, Joanna, Salome and the other women who left the empty tomb that day with great joy to tell others: ‘Aʻole ʻo ia ma ʻaneʻi; akā ua ala aʻe nei ia. He is not here! He is risen! (Luke 24:6).