What did Jesus say?
The Rev. Kealahou C. Alika

Maryreba died on January 19, 2017 in Scottsdale, Arizona. She was an active member of our church when she and her husband, Frank, lived here on Maui. She served as a greeter welcoming members, friends and visitors to worship on Sunday mornings. I have said on many occasions that I was convinced if anyone asked her to park their car she would. 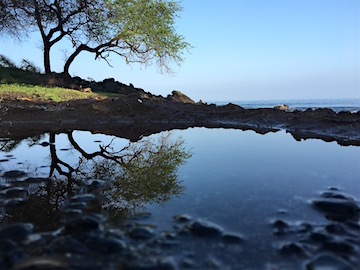 She served as our unofficial “official” photographer for special events and times of worship including our annual golf tournament, annual lū‘au, and yearly Easter Sunrise Service. When she was not out and about the church or the island, one would probably find her in our church kitchen making certain everything was clean and in its proper place.

She was a kind and generous woman. We will always remember her warm smile and her boundless energy.

Phil died on February 28, 2017. His wife Marge was by his side. Phil and Marge lived ina local beach house in Kīhei near Cove Park not far from the Charley Young bridge for many years.

Later, they moved to Maui Meadows and after that to Kula. I know the beach house always held a special place in their hearts. It was there that they raised their sons.

Auntie Eleanor, one of our kupuna or elders, lived nearby across the street with Uncle George, her husband. She remembers walking through the neighborhood one day and hearing opera music emanating from the beach house. In time, she met Phil and together they shared their mutual love for opera.

Those of us who knew Phil many, many years ago remember the Thanksgiving dinners that he and Marge would host at their home in Maui Meadows. Phil was very Italian in his cooking and of course the dinner was always at the large dining table, family-style.

When I asked Phil why he and Marge made the decision to move to Maui, he told me that when they first arrived on the island for a visit, they found their way the old Sam Sato’s in Wailuku. They had bought some noodles and as they sat down on the curb side to consume their meal, Phil said, “We made the decision right then and there to move Maui.” My hunch is the noodles appealed to the pasta side of his love for food.

Phil was kind and generous like Maryreba. He was an active part of our church family as well. He served as a deacon and as our baker. He would bake and prepare the bread for our monthly Communion service and whenever he was here, he would count himself among our pū or conch shell blowers. He also served for many years on our Outreach Committee providing his leadership as we sought to assist those in need throughout Maui County.

Uncle Joe Noland of Wailuku died on March 22, 2017. Like Phil and Maryreba, Uncle Joe and his wife, Auntie Norma Lei, both became a part of our church family. Uncle Joe and Auntie Norma Lei met while in college and later settled in Kentucky. Over time they grew into a family that included their sons and daughters.

Auntie Norma Lei is a lineal descendant of Chang family here in Mākena. Her mother was a “Moloka‘i girl” we would say and her father was a “Maui boy.” After she and Uncle Joe retired, they moved from their home in Kentucky to Maui. In time, a daughter and two sons and a grandson also made the move.

Auntie Norma Lei has always been a calming presence in the midst of the help we needed each year with our Christmas and Easter decorations and our annual lū‘au. She was an active member of our choir and with Auntie Edie and others, she remains a lovely hula dancer. 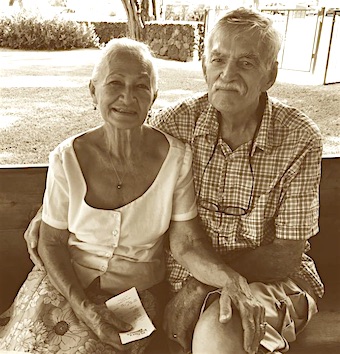 Uncle Joe was always close by her side. To see Auntie Norma Lei was to see Uncle Joe and in the waning days of his health, she was the constant presence by his side.

Uncle Joe was always ready to lend a hand and while some may have assumed he was a quiet-spoken man, what is undeniable is he was also a kind and generous man; a loving husband, a loving father and a loving grandfather.

We have our memories of their time with us. They are gone now but the memories remain.

What are we to say of their lives as we consider our own as we come to the end of this season of Lent? Next Sunday is Passion/Palm Sunday. It is appropriate that we come to it with a reading from the Bible that prompts us to consider Jesus’ approaching death. (Preaching through the Christian Year, Year A, Craddock, Hayes, Holladay & Tucker, Trinity Press International, Harrisburg, Pennsylvania, 1992, page 177)

The story about the death and raising of Lazarus signals a plot against Jesus’ life. (John 11:45-53) Just beneath the surface of the story of the death of Lazarus is the death and resurrection of Jesus. Just beneath the story is the tension between the finality of death and the hope of resurrection. (Feasting on the Word, Year A, Volume 2, Bartlett & Taylor, Westminster/John Knox Press, Louisville, Kentucky, 2010, page 141) That is what is at the heart of our reading this morning.

The raising of Lazarus is the last in a series of seven narrated “signs.” (John 12:18) It marks a turning point concerning Jesus who declares, “I am the resurrection and the life.” (John 12:25)

Two primary results occur in the story. On the one hand, many come to believe in Jesus as the Messiah, as the Son of God. When Jesus received the message from Mary and Martha that Lazarus was ill, he said, “This illness does not lead to death; rather it is for God’s glory, so that the Son of God may be glorified through it.” (John 11:4) On the other hand, the story also “accelerates the conflict between Jesus and the religious authorities” (John 11;47-53), a conflict that will eventually cause others to call for his execution.

Beyond our reading today, the Bible makes this very clear. Some “went to the Pharisees and told them what he had done. So the chief priests and the Pharisees called a meeting of the council and asked, ‘What are we to do? This man is performing many signs. If we let him go on like this, everyone will believe in him, and the Romans will come and destroy both our holy place and our nation.’ But one of them, Caiaphas, who was high priest that year, said to them ‘You know nothing at all! You do not understand that it is better for you to have one man die for the people than to have the whole nation destroyed.’ So from that day on they planned to put him to death.” (John 11:46-50, 53)

When Jesus arrived at Bethany, he quickly learned that Lazarus had already been in the tomb four days. He was too late.

Both Mary and Martha were deeply troubled by Jesus’ delay in getting to their home. Martha said to Jesus, “If you had been here, our brother would not have died.” (John 11:21) Mary and Martha are overwhelmed by their grief – it is a grief we know all too well having lost our own loved ones.

That is the promise and hope of the resurrection. It is a promise we claim; it is a hope to which we hold fast.

I received a telephone call on Friday from Cindy letting us know that the doctors have indicated that Marilyn may die sometime this week. For many years before Marilyn fell ill she and her late husband Wayne, were faithful members of our church.

Each Sunday morning they would sit near the makai front window. I know that it afforded a view of the ocean for Wayne, a view that he enjoyed.

Wayne was not a talker. Instead, if he had anything to say, he would always smile a wide broad smile. His eyes would squint and his teeth would sparkle.

Marilyn always had something to say and more. She had a great sense of humor and beneath what may have seemed like a strong and armored exterior, she had a kind and generous heart.

Wayne is no longer with us. Marilyn will soon be on her way. The story of the raising of Lazarus points to Jesus’ own death. But Jesusʻdeath was not final. There was the resurrection and in the resurrection is the hope of our faith that by believing and more importantly, by trusting in God’s promise,we know that even though we will die, we will live on.

Yes, Jesus raised Lazarus from the dead but we know that while Lazarus lived a longer earthly life, in time he would died again. But we also know that his death would not be final. The promise and hope of the resurrection was his.

For Maryreba, Phil, Uncle Joe and Wayne and soon for Marilyn and all of us the promise of the resurrection is the hope to which we hold fast. As we come to the end of this season of Lent, we proclaim that is good news, indeed!