If it hasn’t already happened to most of us, somewhere along in our lives it does happen. A friend or a family member who has just seen a movie or read a book or watched a play would say in his or her excitement, “You won’t believe how it ended!” and then proceed to tell us about the crucial elements to the conclusion of the movie, book or play. 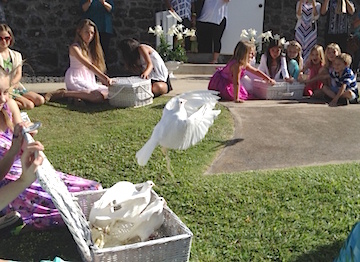 Over the course of two thousand years the story of Easter has been told over and over again. While it is true that the story must to be told to each succeeding generation, it is also true that most of us are here this morning know how the story ends. [The photo is from this morning's Easter sunrise service, taken by Ellen Caringer, as the doves were released.]

What if we were at the trial in Jerusalem when Jesus was brought before the high priest, chief priests, elders and scribes of the Council and charged with blasphemy and condemned to death? What if we were sitting with Peter in the courtyard when he denied ever knowing Jesus and wept? What if we were there when they spat on him and twisted some thorns into a crown and placed it upon his head?

Who among us who condemn Peter for his denial? Who among us would condemn the women for saying nothing after they had returned from the empty tomb filled with terror and fear?

If you are an avid student of the Bible you know scholars point out most ancient authorities bring our reading from The Gospel According to Mark to a short ending at verse 8. But others continue with the addition of verses 9-20.

I have sometimes imagined what it would have been like if Mark had the technology to interview and record those who were at the trial, in the street, at the cross or at the empty tomb. I imagine Mark would have elicited the following response from Mary Magdalene had he been able to ask her, “Did you know Jesus?”

“I loved Jesus. I would always love him. None of the lies they said about him could ever detract from what I saw in him.

Just looking in his eyes, you knew that you were loved, that you were blessed by God, that you were someone. Jesus brought such hope to so many. Surely that could not have died with the broken body on the cross.” “ʻThey cannot hurt Jesus anymore,’” I thought. “The pain is gone.”

“We watched Joseph of Arimathea tell the soldiers to be careful as they took Jesus’ body down from the cross. They made some sarcastic comment, but Joseph scolded them. And Joseph himself took a linen cloth, and wrapped Jesus’ body in it, so gently. Joseph as caring for Jesus as if Jesus were his own child.”

“We knew that we would go home and gather spices and perfumed oils, then come back to anoint the body. It would give me a chance to care for the one I loved one last time and to say goodbye. But we would have to wait – the Sabbath was coming. And in that long, lifeless day I waited and wondered . . . what if?

Later Mary Magdalene would remember what the others would remember about what Jesus said, “Destroy this temple, [destroy my body] and in three days I will raise it up” (John 2:19-22). Although terrified and afraid, she went out and told those who were weeping and mourning, “I have seen him and he is alive!”

There is no spoiler alert this Easter Sunday morning. We know the ending of the story.

But we also know it is more important to remember the entire story - from beginning to end. In many ways if we were there in the beginning of the week, we would have felt the anguish and terror of the disciples, the fear and anger of the religious leaders, the despair and sorrow of the women, and Jesus’ own pain and suffering.

Amid all of the turmoil that was to come Jesus said, “Do not let your hearts be troubled. Believe in God, believe also in me” (John 14:1). “I will not leave you orphaned; I am coming to you. In a little while the world will no longer see me, but you will see me; because I live, you also will live.” (John 14:18-19)