[ The following sermon was initially scheduled for Sunday, March 30, 2014, the day when the annual One Great Hour of Sharing (OGHS) Special Mission Offering was going to be received.

Because of a downed power line half a block away on Makena Road (and consequent lack of electricity and road closure), both services were cancelled for the day. The service itself (readings, hymns, etc.) were retained for the following week. So on Sunday, April 6, 2014 Kahu Kealahou Alika shared his message on "Servant Love" and the OGHS Special Mission Offering was received. ]

I bought some grapes at the Whole Foods Market in Kahului the other week. There was a time not so long when I didn’t buy any grapes in support of farm workers who were seeking better working conditions and wages in the fields of Delano, California.

On September 8, 1965 Filipino and Latino farm workers walked out on a strike against table and wine grape growers in Delano. A grape boycott was called in the years that followed and by 1970 grape growers and farm workers signed their first union contracts granting workers better pay, benefits and protections. 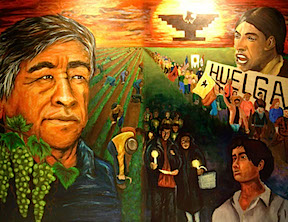 César Chávez together with Dolores Huerta co-founded the United Farm Workers. Through their lifelong commitment to non-violence both were able to overcome a struggle that began a hundred years earlier.

Chávez read about Gandhi’s boycott of salt in 1930 and he knew about Dr. Martin Luther King, Jr.’s bus boycott in Montgomery, Alabama in the mid-1950s. He also knew that Gandhi and King were committed to non-violence.

In 1966 King sent a telegram to Chávez in which he wrote: “Our separate struggles are really one- a struggle for freedom, for dignity, and for humanity. You and your valiant fellow workers have demonstrated your commitment to righting grievous wrongs forced upon exploited people. We are together with you in spirit and in determination that our dreams for a better tomorrow will be realized.”

In the decades following the first strike, Chávez, Huerta and others continued their nonviolent strikes, boycotts, marches and fasts to help farm workers stand up for their rights. The farm workers we not only seeking better wages. The strike was not only about money.

They were seeking better working conditions that included access to restrooms; fresh, free drinking water and limited exposure to pesticides. For our families who grew up on the sugar and pineapple plantations of Hawaiʻi, we know about working conditions.

Chávez died in 1993. Huerta now 83 years old, remains committed to developing leaders and advocating for the working poor, women and children. Like Huerta, Chávez was a servant of the people, empowering those who felt they were left on the margins of society.

I know it is easy for some to dismiss Chávez as a political activist and to say what he did had nothing to do with how we live our lives as people of faith. We do that well in the church. Down through the centuries we have argued and dismissed others over whether new Christians had to be circumcised and follow the dietary laws.

Even now we struggle over the social issues of our day – abortion, marriage equality, the leadership of women in the church. Could anyone really say there is a single Christian understanding of Jesus? Could anyone say there is an unequivocal, unwavering interpretation of the Bible?

Differences of understanding exist in all of our congregations around various issues. So it is not surprising that we would want to dismiss those whose beliefs and actions are different from our own. Are we to believe that the prayer of unity Jesus offered for the early disciples so long ago just didn’t work?

To be sure we can easily point to differences and disagreements in a world embroiled in political, ecological, social, economic and theological turmoil. As Christians, whether Protestant, Orthodox or Roman Catholic. are we to believe the prayer of unity Jesus offered so long ago is no longer applicable to us today?

The Rev. Chad Delaney at the Mantua Center Christian Church in Mantua, Ohio is convinced that “it is a blessed gift and challenge for our churches . . . to see those ways in which we truly do embody the Oneness that Jesus prayed for – a Oneness that makes manifest the glory of God.” Delaney reminds us that we often have the privilege of talking with or working beside someone from another Christian tradition through a soup kitchen or a homeless shelter or other service projects in our local communities.

If you have volunteered at Hale Kau Kau at St. Theresa’s Roman Catholic Church in Kīhei or at Ka Hale O Ke Ola Homeless Resource Center in Wailuku, you may have discovered those with whom we work may have understandings of the Bible vary and that we may at odds about what we believe. If we talk about the nature of Jesus, we may disagree. If we talk about evolution, climate change, gun control, marriage equality, abortion, or the death penalty, we may disagree.

But in the common work that we share of feeding the hungry, giving drink to the thirsty, welcoming the stranger, clothing the naked, caring for the sick and visiting those in prison (Matthew 25:31-46), we have discovered that what we do matters more than what we believe. Delaney reassures us that beliefs are important. They help shape who we are and what we do.

However, he points out that too often we let our beliefs become barriers when they do not need to be. “Life, culture, traditions, and people are so different and complicated,” he adds. “It may be time to give up on the idea of all of us believing the same things.”

What matters most is the Oneness which Jesus prayed for the early disciples and for us it is seen most clearly, passionately and convincingly in what Delaney refers to as the servant love we share with one another and with others. Jesus prayed the prayer for unity during the most difficult and desperate moment of his life. In his final farewell, he offered words of comfort and encouragement to the disciples.

The oneness we share in Christ is not intended to be confined to the fellowship we share within the walls of the church. The purpose is “that the world may believe” that God is love (John 17:23) and that our unity of faith is to be found ina life of service to others – whether we are Protestant, Orthodox or Roman Catholic.

Archbishop José Gomez of Los Angeles said of Chavez that he was “a man of deep faith who struggled against injustice using the spiritual weapons of non-violence, prayer and fasting.”

Chávez “never owned a house. He never earned more than $6,000 a year. When he died he left no money for his family. Yet more than 40,000 people marched behind the plain pine casket at his funeral, honoring the more 40 years he spent struggling to improve the lives of farm workers. (“50 Revolutions You’re Not Supposed to Know,” Mickey Z., The Disinformation Company.)

Beyond the unity of our faith, we share a common humanity with brothers and sisters around the world. So it is that as Christians we join with those whose faith is different than our own but who are no less committed to feeding the hungry, giving drink to the thirsty, welcoming the stranger, clothing the naked, caring for the sick and visiting those in prison.