"That Our Joy May Be Complete"

On Sunday, March 7, 1965 the Rev. Hosea Williams led a march that was to begin in Selma, Alabama and end at state capitol in Montgomery. The purpose was to call attention to the need for additional voting rights legislation that would provide African Americans with the right to register to vote. As the marchers crossed the Edmund Pettus Bridge that day, they were met by state troopers armed with nightsticks and wearing gas masks. 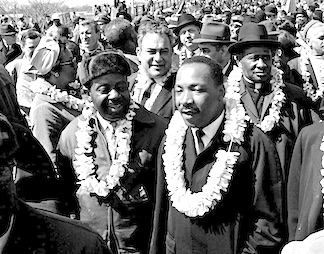 A warning was given for the marchers to disband. Rev. Williams attempted to speak but was told there was nothing to discuss. Then the state troopers moved in. The marchers were chased, beaten, tear gas was thrown and officers on horseback charged the crowd (The Observer, February 7, 1965).

I remember seeing footage of that day on television. It was a day that became known as Bloody Sunday.

Not long after Bloody Sunday, the Rev. Dr. Martin Luther King Jr. joined Rev. Williams and others for a second march to Montgomery. The marchers were again stopped by the police. They kneeled and prayed, then turned around and returned to Selma.

It would not be until a few weeks later on March 21, 1965 that a third march was organized. This time Dr. King and religious leaders from all faiths and denominations, priests, reverends, nuns and rabbis marched. By the time they reached Montgomery four days later, it is said that their numbers had swelled to over 30,000.

I was a sophomore in high school at the time the march occurred. I saw a photograph of Dr. King and other religious leaders wearing lei melia (plumeria) and a photograph of a banner with the words on the bottom of the banner obscured. But over the top, one could easily see the words, “Hawai‘i knows.”

In the years prior to and following the march from Selma to Montgomery protests over racial discrimination and support for civil rights legislation remained constant. When the Rev. King was shot and killed at the Lorraine Motel in Memphis, Tennessee fifty years ago on April 4, 1968, I had just turned 18 the summer before. The photograph of three of Dr. King’s aides pointing in the direction of where they believed the shot came from is one that will remember for as long as I live. 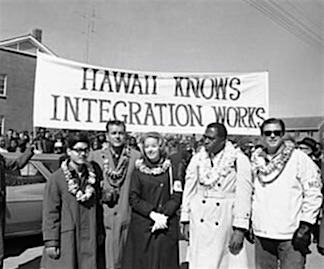 Dr. King had travelled to Memphis to lead a peaceful march in support of striking sanitation workers. He was shot four days before the scheduled march. It was while he was in Memphis that his now iconic “Mountaintop” speech was given.

Dr. King seemed to sense that his death was near. I have shared these words with you before from that historic moment.

“We’ve got some difficult days ahead,” he said. “But it really doesn’t matter with me now because I’ve been to the mountaintop. And I don’t mind. Like anybody, I would like to live a long life. Longevity has its place. But I’m not concerned about that now. I just want to do God’s will. And he’s allowed me to go up to the mountain. And I’ve looked over. And I’ve seen the Promised Land. I may not get there with you.”

As he stood on the balcony at 6:00 p.m., it is said that he called down to jazz saxophonist Ben Branch and requested that his favorite song, “Take My Hand, Precious Lord,” be played at a meeting scheduled for later that night. “Play it real pretty,” King told Branch.

Those were his last words. At 6:01 p.m. a single rifle shot rang out. Dr. King was pronounced dead an hour later at 7:05 p.m. at St. Joseph’s Hospital. There was intense anger over his assassination and there was intense grief over the loss of a life cut short.

Kirsten West Savali, a journalist, wrote: “Children of the strike remember that the man their parents told them was coming to help had been killed. They worried that there would be no more help.”

“But the sanitation workers remembered King’s words. He had seen the mountaintop. He had seen the Promised Land; they just needed to keep climbing to get to the other side – with or without him. The strike would continue, just as King would have wanted.”

As we gather here on this Second Sunday of Easter in the aftermath of the death and resurrection of Jesus, we come aware that “we no longer can see or hear [Jesus], except with the eyes and ears of faith” (The New Interpreter’s Bible, C. Clifton Black, Vol. 12, Abington Press, Nashville, Tennessee, 1998, page 384).

The message of Jesus as the word of life was “in the eyes of those who saw, the ears of those who heard, the hands of those who touched, and it is they who have passed it down through the generations to us” (Feasting on the Word, Year B, Volume 2, Bartlett & Taylor, Westminster/John Knox Press, Louisville, Kentucky, 2008, page 397). The writer of The First Letter of John was someone who saw, heard and touched Jesus.

For the writer and for those in the early church, koinonia was more than just “fellowship.” It was more than a social gathering. Koinonia is better understood as “sharing.” Such an understanding reminds us of the joy we share through our fellowship with God, with Jesus, and with one another. Our sharing is about the tragedies and triumphs of our lives; about the suffering and sorrow we have experienced; about the joy and hope that out of death comes new life; about how despite the losses we may face in our own lives that love remains.

We do not walk alone. We walk in the light with the one who is himself the light. On this Second Sunday of Easter, we give thanks for God’s grace and for “the opportunity to remember the faith of those early followers who left a legacy of proclamation. They witnessed the presence of Christ who is present with us still” (Ibid., page 399).

The joy of Easter is we have come to understand that the hope and promise of eternal life is ours in Jesus Christ. In the parable of the Good Shepherd, Jesus said, “I come that they [that we] may have life, and have it abundantly” (John 10:10).

As the years go by what I have come to believe is this: We need not wait until our own death to inherit that life. If time is eternal, then whether in life or death, eternity is already here. Jesus was crucified over 2,000 years ago. Dr. King was assassinated 50 years ago.

Dr. King did not promise anyone eternal life, but he understood that the hope of an abundant life now is the promise for which Jesus also died. Although we were not in the physical presence of Jesus when he walked the earth, we know enough from others, we know from the testimony of Dr. King that “God is light and in [God] there is no darkness at all” (1 John 1:5). It is a light that shines in the darkness. It is the light of an abundant life now and throughout eternity.

All this we declare to others so that our joy may be complete.