What did the people say?
The Rev. Kealahou C. Alika

As a young boy, I always enjoyed the sights and sound sand the color and commotion of a parade passing by. The annual Christmas parade in Kainaliu town on the island of Hawaiʻi where I spent my childhood days included a military color guard at the start of the parade followed by our high school marching band, the homecoming queen and her court, the local Boy Scouts and Girl Scouts troops, and politicians waving as they all passed by under Christmas tree lights strung across the street from one end of parade route to the other.

All of that was fine enough on its own but it would not be a Christmas parade without the arrival of Santa and his helpers. It was not hard to see him high atop our town’s red fire truck.

As children, we would instinctively raise our hands and call out to Santa encouraging him to remember that he needed to shower us with candy. He would respond by reaching into his big red bag multiple times to lift out a handful of candy and with one grand sweep, he would fling the candy into the night air from one side of the truck to the other.

Although I had heard through a song that some towns had an Easter parade and that girls were encouraged to “wear an Easter bonnet with all the frills upon it,” there was never such a parade in Kainaliu. No bonnets throughout Holy Week but wearing a lauhala papale worked. So it has become a tradition for us here at Keawala‘i to wear our finest lauhala hats to celebrate Palm Sunday. No frills on the hats – but maybe a flower lei or a feather lei. 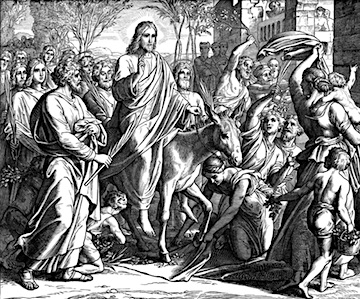 On a day such as this we recall another parade that occurred centuries ago when Jesus entered the city of Jerusalem for the final time. The occasion was festive, at least at the outset.

In preparation for the journey, Jesus instructed his disciples to go into a village to find a donkey and a colt and to tell the owner that he needed them. (Matthew 21:2-3). The disciples did as Jesus asked them.

Shouts of “Hosanna” rang out. Perhaps there was even some music and singing. It was by all accounts a “festal procession” filled with excitement and joy for many.

But beneath the excitement and joy for many, there was also the turmoil felt by others. Those in positions of power – both political and religious – including Herod the King and the Pharisees and Sadducees at the Temple felt threatened by Jesus.

“By the time Jesus (finally entered) Jerusalem, the town (was) in an uproar.” (Christian Century, March 15, 2017, page 19) The Greek word (eseisthe) that is used to describe the upheaval likens it to a shaking - “like the earthquake that strikes days later as Jesus dies on the cross.” (Matthew 27:51) (Op. cit.)

Amid the chaos that followed, some asked, “Who is this?” The people responded and said, “This is the prophet Jesus from Nazareth of Galilee.” (Matthew 21:1-11)

Others probably asked, “Why was he coming to Jerusalem? In our reading from The Gospel According to Matthew we are told that this took place to fulfill what had been spoken by the prophet Zechariah (Zechariah 9:9):

“Tell the daughter of Zion,
‘Look, your king is coming to you,
humble and mounted on a donkey,
and on a colt, the foal of a donkey.’”

Jesus made the journey to Jerusalem to restore the city and to rescue the people of Israel from Roman oppression not by force of arms but by persuasion. He enters Jerusalem, not on a proud steed like a Roman Centurion, but on a donkey.

He brandishes no weapons – no javelins, no swords, no daggers.

The weapons of war and conquest have changed since that day so long ago but our predilection towards war and violence continues. Today, the world is flush with kings and princes; prime ministers and presidents, dictators and despots who seem hell-bent on using arsenals at their disposal - automatic weapons and drones, missiles and bombs, tanks and helicopters, warships and military aircraft.

It seems there is no room in our world or in our hearts today for someone like Jesus. When Jesus made his way to Jerusalem for the final time, he entered without “flaunting power or threatening violence, but in humility and peace.” “Like Solomon(who entered) Jerusalem on a mule (1 Kings 1:33), Jesus (came into the city) in peace; he (came) not to magnify his own ego, but to fulfill God’s” promise of a new life. (Op. cit.)

Today, there are many who want to surround themselves with military power and those who see the needs of others as an unnecessary burden. Not Jesus.

Throughout his very brief ministry, he was surrounded by a crowd of common folk and not so common folk – people seeking hope and justice, people longing for freedom – a Roman centurion and a Pharisee; a Samaritan woman and a Gerasene man, a blind man named Bartimaeus and a tax collector named Zacchaeus; and many other unnamed men, women and children.

The sights and sounds, the color and commotion that we commemorate on this day may seem like a “sweet children’s parade, with adorable little ones swinging palms and shouting ‘Hallelujah,” but the Rev. Christine Chakoian at First Presbyterian Church of Lake Forest, Illinois wonders otherwise. What if we followed Jesus’ example and questioned the Herods of our day about their commitment for fair treatment and equal rule for all?

What if we followed Jesus’ example and questioned the point of our worship when we fail to comprehend what it means to be in the world but not of the world - that there is no separation between how we live our lives in the church and in the world? (John 17) What if we followed his example and questioned ourselves about what it means for us to be servants in the service of others? (Op. cit.)

Palm Sunday may have started out as a parade. But by appropriating the symbols of the king, Jesus turned everything upside down.

The people were expecting a king and so they waved palm branches to signify their expectation of a military victory over the Roman occupation of the city. They surrendered themselves to his authority by taking their cloaks off and laying them on the ground.

But there were no military standards, flags or banners to accompany his entrance into the city. There were no mounted chariots or marching soldiers.

He came on the back of a donkey. He came, not as a warrior king but as a suffering servant, and changed the world forever.