“Following: That We May Have Life”

We see them all around Maui. It’s not the mongooses or the chickens, but the cats; lots of cats at the beach park at Kanahā and in the middle of Kahului’s industrial park. We see them here Mākena and in other communities around the island. 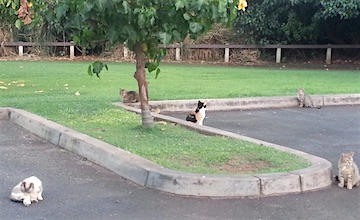 Efforts to control the feral cat population continue with the help of volunteers and various animal rescue groups that have “catch and release” programs. Other volunteers provide water and food for cats that may not find a home but are released back into the parks and other areas once they are spayed or neutered.

I’ve owned my share of cats in the past. Unlike dogs, they are inclined to be more independent not always requiring our constant care and attention.

As such, they seem to develop a mind of their own. Cesar Millan, the dog whisperer, has published numerous books and he has his own television series on the National Geographic channel. He reminds us that dogs are “pack animals.” They are at home in a group. It works for the dogs to be in the company of other dogs.

Last Sunday someone uttered the phrase – when referring to a failure of a collection of people to behave or to be led: “It’s like herding cats.” Unlike dogs, cats whether feral or domesticated are not “pack animals” or “herd animals. Cats are incapable of being herded. So there is in point in eliciting such a behavior.

Our reading from The Gospel According to John is not about mongooses, chickens, dogs or cats, but about fish and sheep. While some fish may travel in schools, some live lives independent of other fish. Sheep are more like dogs than cats in that they are pack animals or more correctly they are herd animals.

But sometimes sheep behave like cats – going off on their own and consequently losing their way. It is the kuleana or responsibility of the shepherd to “herd the sheep.”

Austin Crenshaw Shelley is the director of Christian education at the Presbyterian Church of Chestnut Hill in Philadelphia, Pennsylvania. He writes: “ . . . the shepherd’s staff has two useful ends: a crook for drawing the sheep away from danger and a blunt end for prodding them toward places they would rather not go.” (Christian Century, Congers, New York, March 30, 2016, Volume 133, Number 7, page 18)

Of course, all this talk about mongooses, chickens, cats, dogs and sheep is really about people – about you and about me. As we continue our celebration of Easter, it is helpful for us to be reminded that while Jesus makes clear that he is the shepherd and we are the sheep, so often we behave as though we are cats.

I can just imagine how frustrated Jesus would be if he tried to herd cats.

Shelley reminds us: “A good shepherd both protects and agitates as needed,” a good shepherd “both gathers in for shelter and leads out to graze in new pastures. And so it is with God the Good Shepherd who draws us in to hold us – but also relentlessly pursues us and, in order that God’s purposes might be fulfilled, challenges us to go where we would rather not go.” (Op. cit.)

When Jesus showed himself to the disciples by the Sea of Tiberias it had already been a very long night of fishing for them. It began as a fishing expedition that ended with no fish.

But why a fishing trip? Why would Peter choose to go on a fishing trip and why would the disciples be so quick to say, “We will go with you.”

Father Gary Jones, an Episcopal priest surmised that Peter and the other disciples were so overwhelmed by the trauma of Jesus’ death that they sought to do something that was familiar and in doing so to find a way to go on with their lives. The week prior to Jesus’ death had been filled with tension – there was the “emotional high of their entry into Jerusalem followed by extraordinary events in the temple, a Passover meal unlike any other, an intense experience in the Garden of Gethsemane, an unexpected betrayal, an armed arrest, a series of denials, a mock trial, a jeering mob, and a bloody execution.” (Feasting on the Word, Year C, Volume 2, Bartlett & Taylor, Westminster/John Knox press, Louisville, Kentucky, 2009, page 422)

It was a crushing end for the disciples and then came the news that we are convinced would have been cause for great rejoicing when the women returned with the news that the tomb was empty. But even that news troubled them.

Soon after Jesus appeared twice to the disciples and then for the third time on the shore of the Sea of Tiberais. We can only imagine the tension that was also generated by the resurrection appearances.

What were Peter and the disciples to make of all of what was occurring? Peter and the others took a deep breath and decided, “Let’s go fishing.”

At dawn Jesus appeared on the beach, but they didn’t know it was he. Jesus showed them where to catch fish and then he cooked some, and took bread and fish and gave it to them – and it was then that they knew.

It was out of the brokenness of their lives that Jesus turned to the familiar and the ordinary – fishing and eating together. It was out of the familiar and the ordinary that Peter would receive a lesson on obedience: to love Jesus will mean caring for the sheep – caring for others – and tending to the needs of those whose lives have been broken. (When We Gather: A Book of Prayers for Worship, James G. Kirk, The Geneva Press, Philadelphia, Pennsylvania, 1985, page 70)

It is ironic that “Jesus chose Peter, who had denied him three times in his hour of need . . . ” Jesus saw the brokenness of Peter’s life but did not condemn him. Instead, he chose Peter to tend his sheep and to build the church. (Feasting on the Word: Worship Companion, Kimberly Bracken Long, Westminster/John Knox Press, Louisville, Kentucky, 2012, page 156)

After asking Peter three times, “Do you love me?” Jesus said to him, then come and “follow me.” (John 21:19) Like Peter, if we are to follow Jesus, if we are to love Jesus ,then we must feed and tend to one another and to others.

What makes the encounter between Jesus and Peter significant is the way in which Jesus is aware of Peter’s denial of ever having known him, yet Jesus is unwilling to erase or fix or ignore or deny Peter’s brokenness. We must share the good news that God knows about the broken places in all of our lives.

Instead “ ... a broken Jesus feeds a broken Peter and calls upon him to respond by extending Jesus’ care for others: ʻFeed my lambs.’ ʻTend my sheep’ and ‘Feed my sheep.’” (John 21:15-17) None of us here - no one among us here will go through life unbroken.

It is God who sustains us and calls us on a journey to be about the work of feeding and tending to one another. “We are not perfect.”

Thankfully, whether we see ourselves as cats or sheep, “God loves us anyway – not just in spite of our brokenness, but because of it.” (The Christian Century, March 30, 2016, page 18)