Imagine one of Jesus’ followers in the days after he died trying to put into words his or her experience. It is not likely that they would be speaking in our vernacular but bear with me as we give an ancient story a contemporary voice.

‘Okay. So here’s the deal. This is what I know. Jesus is dead. I know that. I saw it all happen. I watched the soldiers arrest him and I watched them execute him and bury him.

I’m not one of the Twelve, you understand. I mean, I’m a disciple of Jesus and everything but not one of the Twelve. But I came to Jerusalem with everyone else and I was there when Jesus went to the garden to pray. Except for Judas, all of the other eleven disciples went with him. I saw it all.

Okay. Now, here’s the other thing I know for sure; Jesus is alive. I know, I know. I just said Jesus is dead. I saw him die. But then I saw him alive. I saw him. Don’t ask me any questions about it because I can’t answer them. All I know is what happened, what I saw.

There was a group of us in the upstairs room where we were staying after we had arrived in Jerusalem. And we had the doors locked and bolted. I don’t mind telling you we were scared. We were very scared. Who wouldn’t be?

None of us had a clue what was going on. Some worried that we would be arrested too. We were all just sitting there looking at the locked doors and the window shutters wondering, worrying if they would hold if the soldiers came for us.

I must have shut my eyes for a while when I heard someone gasped. I looked up and I saw him. We all saw him.

Well frankly I thought I was hallucinating. I never thought fear could do that to a person. But it wasn’t a hallucination. It was him or at least it looked like him and didn’t look like him at the same time. It was as if he looked more like he was supposed to look than he actually did look.

I know that it doesn’t make any sense.

He smiled at us and said, ‘Peace be with you,’ and showed us the wounds in his hands. He told us not to worry. It’s weird but when he told us not worry, just the way he used to say it to us whenever we had that look on our faces, I knew it was him.

Then he blew his breath on us and said ‘Receive the Holy Spirit. He said something about forgiveness. Then he wasn’t there anymore.

Everyone started talking and shouting. After about an hour of this, Thomas, who was one of the Twelve, showed up with others who had been out getting food. We must have scared them to death all shouting about what we had just seen.

In the end, Thomas yelled at everyone to be quiet. Then he said something I will always remember. ‘Look,’ he said, ‘as far as I can tell, something happened. I don’t understand it. But you don’t need to prove it to us or convince us that you saw him. I think each of you had an experience of Jesus whatever that means. Wasn’t that just the way when Jesus was with us?’

‘So, I don’t want to hear any more about it; and I’m not going to believe, or not believe or anything else until I see him for myself. I want to see him and to hear him and to touch him. I don’t see why that isn’t going to happen.” He sounded a little irritated when he added, ‘Besides if he chose to show himself to you, he’s obviously not fussy about who sees him! Let’s eat!’

A week later, during which time our conversation changed from talking about what happened and how, to why it happened and what it meant, Thomas got his wish. Afterwards, when Jesus wasn’t there anymore, there wasn’t much talking.

Martha sat on the floor with her eyes closed, smiling. I watched Nathanael weep. And Thomas just went around the room unlocking all the windows and doors and opening them wide” (Adapted from “Amazing” Based on John 20:19-31, Seasons of the Spirit, SeasonsFUSION, Lent, Easter 2015, Wood Lake Publishing Inc., 2014, page 134).

The story of Thomas and the other disciples is a familiar one to many of us. We may be inclined to focus on Thomas and to call attention to his doubts about what the others had seen. We would like to think we are better than Thomas, that we are the ones “who have not seen and yet have come to believe” (John 20:19)

This is church. Whatever happens outside happens outside. Any talk about climate change, gun violence, health care, war, economic disparities, gender identity, telescopes on Mauna Kea, all that belongs outside the doors of the church.

We have privatized and personalized our faith for our own comfort and reassurance at the expense of a world yearning for healing and wholeness. What is amazing about our reading from The Gospel According to John is the allusion to God’s presence in the world that appears in the second chapter of The Book of Genesis.

Jesus breathes the Holy Spirit into those who were in the room with our storyteller, “recreating them not only as those who follow (disciples), but now as those who are sent (apostles)” out beyond the closed doors of the church and into the world (Feasting on the Word, Year B, Volume 2, Bartlett & Taylor, Westminster/John Knox Press, Louisville, 2008, page 402). That same breath – the Spirit of God – was present at the beginning of creation. That same Spirit promised by Jesus to the disciples is now fulfilled (John 14-16).

The function and benefits of the Spirit are many but here the disciples, now apostles, are given authority to grant or refuse to grant forgiveness of sin (John 20:23; Matthew 16:19, 18:18). The good news of forgiveness is now entrusted to them and to us and we are all called to continue the work of Jesus, to continue that God sent Jesus to do.

The power of Jesus’ encounter with the disciples was not lost on our Hawaiian ancestors. I can only imagine their joy when they heard it said: Jesus breathe on the disciples.

That exchange of breath, of conferring upon one another the breath of life is seen more and more often today. In the public demonstrations on Mauna Kea last week and at the University of Hawaiʻi in Manoa on the island of Oʻahu, that gesture of empowering one another spiritually was in full view. 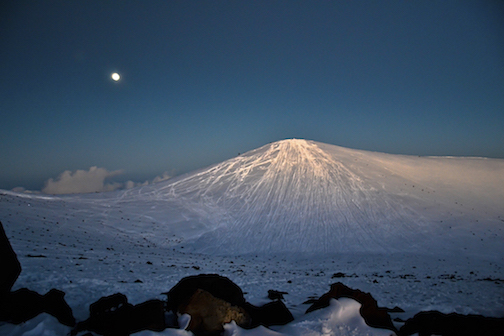 For our ancestors years ago, I can only imagine the great joy they must have felt when they realized Jesus was sharing the breath of life with his followers and sending them out into the world empowered by the Holy Spirit. I can only imagine their joy when they heard it said: “Now Jesus did many other signs in the presence of his disciples, which are not written in this book. But these are written so that you may come to believe that Jesus is the Messiah, the Son of God, and that through believing you may life in his name” (John 20:30-31).

To the disciples then and now, Jesus has given peace, Spirit, forgiveness, and the power to witness to the resurrection faith we share. Joy and fellowship are the marks of that faith and for that we give thanks to God. Amen.


[ Photo above is of Mauna Kea on a moonlit winter dawn, taken some years ago by
Houston Evangelista of Honaunau, Kona; Houston is Kahu Alika's brother.]