It didn’t take long for the stream of catcalls from fans attending a recent concert with blues guitarist B.B. King in St. Louis the other week. King performed a handful of complete songs “amid meandering musical snippets, long-winded soliloquies, an eight-piece backup band that missed its cues and a 15-minutes sing-along of ‘You Are My Sunshine.’” (The Maui News, Tuesday, April 8, 2014, page A2)

Tom “Papa” Ray of Vintage Vinyl in St. Louis did not attend the concert, “but said audiences should know to adjust their expectations when watching beloved musicians whose peak is well in the past.” (Op. cit.) King continues to tour extensively despite being slowed down by age and infirmity, including diabetes. 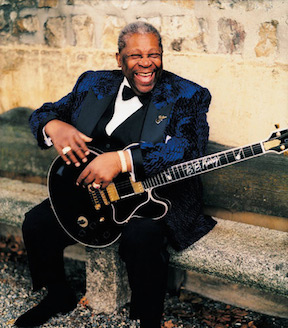 At 88 years old, B.B. King is a living legend. He was inducted in the Rock & Roll Hall of Fame in 2005. He has been called the “King of the Blues” and “Ambassador of the Blues.”

For more than half a century he has defined the blues for a worldwide audience. He has released more than 50 albums over the course of his musical career.

But for some like digital marketing executive Larry Goldstein it comes down to paying $150 for a pair of tickets plus parking. “Is he a living legend?” he asked rhetorically. “Absolutely!”

A resident of Wailuku responded to the news of those who heckled and insulted King in her letter to the editor of The Maui News. She wrote: “I saw him here on Maui and know that mistakes or not he is such a nice man that it is ludicrous to even think about being mean-spirited to this kind old gentleman.” (The Maui News, Saturday, April 12, 2014, A11)

How is it that over the course of an evening, fans of BB King turned from adoration to animosity? We might be quick to chide them for showing little compassion and respect for King. But we could easily be among the multitudes who turn away when our expectations are not met whether at a concert or sporting event or a religious gathering.

The Rev. Stephanie Jaeger, pastor of Augustana Lutheran Church of Hyde Park in Chicago, is troubled by our reading this morning from The Gospel According to Matthew. “How does a crowd turn from shouts of joy and welcome to cries of murder in the span of a few chapters of scripture, a few days in the life of Jesus...?” (Reflections on the Lectionary, Christian Century, April 2, 2014, page 21) How is it that those who gathered to see Jesus enter the city turned from adoration to animosity in such a short period of time?

Those who were there when Jesus entered Jerusalem for the final time, waved palm branches, placed their coats on the ground and shouted their hosannas. The palm branches were meant to welcome a warrior-king on a stallion who would save them from Roman occupation—not a peasant-servant on a donkey.

“When the crowds realize that Jesus isn’t the kind of hero they expected, they turn on him. Disappointment turns to rage.” (Op. cit.)

Were we among those who gathered to welcome Jesus to Jerusalem that day, would we have set ourselves up for disappointment because we confused the power of military force with God’s saving grace? Jaeger reminds us of what is at the core of God’s revelation to us on this day and that is: “God does not save in the ways we might expect.”

Jaeger adds, “I realize that it is people like me – part of the crowd – whom God forgives for our false expectations and then turns them into instruments of salvation and hope.” (Op. cit.) It will be through the cross that God will bring that salvation and hope deep into the midst of all who suffer.

It is that suffering that is a part of the music of BB King. In some ways the blues may not be unlike the lamentations of the psalmist. Both convey an immediacy of the human condition – that like King we will face our infirmities with the passing of time and that like Jesus we will die.

The journey to Jerusalem – from life to death – is one we take with each other and with the God we have come to know in Jesus Christ. God’s salvation and hope will continue to unfold through each of us.

That is Jaeger’s conclusion. She writes: “The image of Christ’s crucified body, hanging lifeless from the cross, lingers in my spirits on this day. But so does my favorite benediction, from Teresa of Ávila: “Christ has no body now on earth but yours.” (Op.cit.)