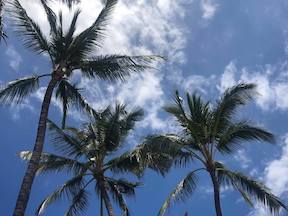 In churches throughout the world, this Sixth Sunday of Lent may be celebrated as Palm Sunday, or Passion Sunday, or both. For us here at Keawala‘i, we celebrate this day as Palm Sunday – a day when we focus on Jesus’ entry into Jerusalem as an occasion of triumph and praise. Our children wave palm branches and we wear our lauhala hats.

Others will observe this day as Passion Sunday – a day when the focus is on the final days of Jesus’ life and his death. Some feel “the mood of victory and joy” of a Palm Sunday celebration “is premature, stealing the message from Easter yet to come,” and therefore “not an appropriate worship prior to Good Friday and Easter” (Preaching Through the Christian Year C, Craddock, Hayes, Holladay & Tucker, Trinity International Press, Harrisburg, Pennsylvania, 1994, page 165).

But the time will come for us as we move through Holy Week and as when we gather in this sanctuary on Thursday evening to remember and commemorate Jesus’ final days with the disciples knowing that Easter will soon follow. Ron Adams, a pastor of Landisville Mennonite Church in Pennsylvania reminds us that “somewhere between Bethany and Jerusalem a parade is forming that also, in a certain light, looks like a funeral cortége. We know what is coming, but we are not there yet” (Living the Word, Christian Century, March 27, 2019, page 18).

So what do we make of this day? “Traditionally, Palm Sunday services draw from all the Gospels.” In John’s account of this day, a crowd gathers with palm branches and greets Jesus’ entry into the city.

Matthew’s account includes the prophecy of Zechariah (9:9; Matthew 21:5) - of a “king entering the city on a donkey and on a colt” who is noted. Mark, along with John and Matthew, tells us that many people spread cloaks on the ground and leafy branches they had cut in the fields. They went ahead of Jesus shouting their praise (Mark 11:8-10).

Although Luke’s story closely follows Mark’s account (Mark 11:1-10), he has a slightly different understanding of the occasion. That understanding comes to us in our reading from The Gospel According to Luke.

What are we to make of the varying accounts of Matthew, Mark and John and now Luke about what transpired that day. We should not be surprised that their perceptions of that day would vary. We know that to be true when we look at what happens in our own lives. Something happens in our day to day living – in our families, in our work places, in our communities and even in our churches – but each person has a different perspective on what we assume was a shared common experience.

One of the most noticeable differences in our reading this morning is this: Luke’s account of the day Jesus entered Jerusalem is “more subdued, less crowded and less noisy” (Preaching Through the Christian Year C, Craddock, Hayes, Holladay & Tucker, Trinity International Press, Harrisburg, Pennsylvania, 1994, page 166). Consider the following.

At the outset of our reading we are made aware that this moment in Jesus’ life is preceded by the larger story that began when he was rejected in a village in Samaria. Luke writes: “When the days drew near for him to be taken up, he set his face to go to Jerusalem” (Luke 9:51).

Jesus knew that his journey to Jerusalem would be his last. When he arrives in Jerusalem, he weeps over the city and makes the prophecy of the city’s destruction (Luke 19:41-44). Luke makes no mention of hosannas being shouted or branches cut from trees. Some Biblical scholars point out that such demonstrations or parades were often for nationalistic purposes. And while Jesus is called “King”, Luke makes clear and is careful to insist that it is neither political nor military title (Luke 23:2-5).

That praise is not offered by the crowds that Matthew mentions (Matthew 21:9) or in John’s account of those who gathered as a result of the reports about Jesus’ raising of Lazarus from the dead (John 12:12). Jesus is praised and hailed as king not by the crowds who were gathering for the Feast of the Passover in Jerusalem, but by his disciples and by his followers.

While many still did not fully understand Jesus and the nature of his messiahship, they were not among those who would sing praises in one moment and then scream out for his death within the same week. Despite the subdued account of the day, some of the Pharisees or religious leaders objected to what they were witnessing.

We are not told what it was that they were objecting to only that Jesus responded by saying, “I will tell you, if these were silent, the stones would shout out” (Luke19:40). Over four decades ago, I had an opportunity to travel to the Netherlands to join other Christians from around the world were gathering in the Hague to address the impact of racial conflicts around the world.

Indigenous, native and aboriginal people were among those who shared stories about the effects of racial conflicts on their lives. One of my clearest memories of that day was hearing a woman from what was then known as Southern Rhodesia speak about their struggle for her country’s independence. At the conclusion of her remarks, she referenced the words of Luke.

Whether in her country or in other countries around the world, the effort to silence the voices of people continues. I heard in her voice a word of defiance and a word of hope when she said: “I will tell you, you may silence us but the stones will shout out.”

Pastor Ron Adams writes of Jesus’ response to the Pharisees: “[His] words challenge me to take another look – to reconsider the scene [of this day], to turn my eyes from what I know lies waiting up ahead and instead to focus my full attention on the one astride the colt. Jesus’ words challenge me [and it challenges all of us who are his disciples, his followers] to recall his many deeds of power and to offer praise to God who sent him into the world” (Living the Word, Christian Century, March 27, 2019, page 18).

And he reminds us that we do this “not as an act of denial of what comes next but as an act of obedience and worship [to the one who sets us all free]. The part of me, [the part of us] that thinks [all of our Palm Sunday celebrations are] all too much – too loud, too celebratory” will take a seat. If I don’t sing, [he adds, if we don’t sing], the stones will shout out.”